Eritrea’s Silent War Slippage—how will the dead matter in Ethiopia? 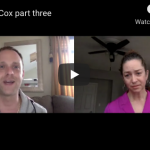 Michael Cox is the executive director of Black & Pink Massachusetts, and administrator of the Massachusetts Bail Fund. In this interview, he discusses how, after his experience of being incarcerated, he re-directed his focus towards advocacy for and with incarcerated LGBTQ and HIV/AIDs+ people.

Part One: Journey from incarceration to becoming a leading activist

Michael Cox describes the compounding issues that made him more vulnerable to entanglement with the criminal justice system: growing up as a ‘systems’ kid, drug addiction, being gay, exploitation, crime and sexual abuse. He describes how sexual abuse and discrimination continued inside prison. After he was released, he connected with Jason Lydon, the founder of Black & Pink, an experience that started him on the road to activism. Committing himself to furthering his formal education, he studied the history of the American criminal justice system while at Clark University. From there, he became a criminal justice reform professional, working with Black & Pink and the Massachusetts Bail Fund.

Cox describes how Black & Pink works in solidarity with LGTBQ people throughout their entire journey in the criminal justice system. He describes their approach as mutual aid: being a part of the community that they serve.  He highlights two issues that pose distinct challenges for people in the LGBTQ community: housing upon release from prison and various forms of solitary confinement–notably mental health watch–while in prison.

Cox discusses an article he wrote authored last summer, following a controversy involving the Bail Fund when a man was bailed out and then committed a new crime. People who cannot make bail because of their financial means have worse outcomes: including more plea bargains, loss of employment, or even worse. Additionally, he notes that the man at the heart of the controversy had been held for two years and nothing was done to positively intervene in his life.

As an abolitionist, Cox explains, his goal is to tear down systems that do not serve us and to build up communities that are currently experiencing violence, deep poverty, and widespread trauma. The path forward requires commitment to reduce harmful conditions of confinement and work towards abolition. He concludes the interview by addressing Black & Pink’s agenda for this year: decriminalizing sex work and a LGTBQ “bill of rights” for people in prison.