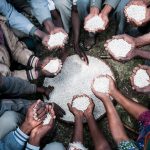 ﻿﻿Ethiopia: No Longer the Land of Famine?

I optimistically entitled Chapter 8 of my 2017 book Mass Starvation, ‘Ethiopia: No longer the land of famine.’ I argued that the commitment to famine prevention by the Ethiopian government meant that Ethiopians had escaped from the degrading identification with the images of the starving from the era of LiveAid. At the time when I was writing the book, the United Nations warned of ‘four famines’: Nigeria, Somalia, South Sudan and Yemen. Ethiopia also faced an enormous food crisis—but was not listed as at risk of famine. Credit for this goes to the Ethiopian government. The individual who led the rapid response was Deputy Prime Minister Demeke Mekonnen.

The scale of the drought became evident in August 2015, when the El Niño effect caused a widespread harvest failure. In many areas there had also been harvest failures in the previous two years. In addition to the existing Productive Safety Net Program caseload (7.9 million people), just over 10 million people were assessed as needing food aid. After a few weeks’ hesitation, the government acted boldly. It was fortunate in that it had set aside more than $1 billion as a petroleum reserve in case the price of oil rose, which didn’t happen. The Ministry of Finance made available $700 million to import food aid, of which $300 million was spent in four months. This early response ensured that the food pipeline was quickly filled. International donors could not respond that rapidly, but their growing pledges—$700 million by March 2016—helped give the government the leeway to pursue its ambitious program. The government also imported trucks and used the working parts of its new railway from the port of Djibouti, still incomplete. Total government relief spending was $735 million, and international donors spent $985 million.

Food aid was the single biggest element in the relief program. Emergency relief reached about 8 million people. It was delivered primarily through the PSNP, which also engaged nearly 6.6 million people in public works activities and provided those who couldn’t work with direct support.The program included trucking water to communities where wells had dried up and providing fodder to keep livestock alive. While food aid was a government effort supported by the WFP, the other components were also implemented by an array of NGOs.

The relief program worked. Not only was no excess mortality reported, but livelihoods were relatively well protected. After the 2016 harvest, the number of people needing food aid was cut back to 5.6 million.

The prompt and capacious relief response was politically smart, probably more so than the government realized at the time. The map of anti-government protests in 2015-16 and the map of the drought relief efforts do not overlap: those in receipt of food rations evidently thought better than to riot and destroy infrastructure. Moreover, the history of food price hikes inflaming political discontent is too strong to need repeating. The fact that basic food prices in Ethiopia rose only 28 percent (and in the case of wheat, didn’t rise at all) during the country’s harshest food crisis and its biggest opposition mobilization may be the reason why the EPRDF survived.

The strategic commitment to prevent famine is not evenly distributed across all Ethiopians. Since 1991, relief efforts have been better organized and more generous in the TPLF/EPRDF heartland of Tigray than elsewhere. In the politically marginal areas of south-east Ethiopia, particularly during counter-insurgency operations, the army tends to revert to faminogenic practices. Treating food security as national security also puts key elements of the strategy in the hands of national security institutions. The 2002 national security white paper called for transparency and public participation in national security issues, but in practice the reverse has happened. Much of the information that is needed for an effective anti-famine political contract (let alone a functional democracy) is tightly-controlled.

Over last half century, the single most important reason why Ethiopians have suffered famine is repressive government indifferent to the welfare of its people. The EPRDF reversed that. Remarkably, its deepening authoritarianism, including the 2005-06 crackdown on the opposition and the heavy-handed, security-led response to widespread protests in 2015-16, have thus far neither undermined the government’s drought relief programs, nor contributed to food insecurity and hunger. The other side of the coin is that the relief program appears to have won the government some grudging acceptance from the population, not any deep support. If the commitment to preventing famine is to become a genuine social-political contract with the citizens, it must be part of a democratic process. That isn’t happening. On the contrary, the repressive turn is cause for concern, both in itself and because it may yet spell a retreat from the leadership’s commitment to preventing famine. That commitment is only as robust as the leadership’s historic analysis of the political and national security threats posed by famine, which can of course change. There are no other guarantees. To date the abandonment of policies that protect against famine has not happened, but there is need for vigilance.

There are three main lessons from this.

One: the Ethiopian government knows how to respond rapidly and effectively. The institutions and programs still exist.

Two: although today’s crisis is in Tigray, the question arises whether the government has the funds and will to mount this kind of emergency program elsewhere in the country. For example, when the next El Niño effect harvest failure strikes, will Ethiopians be as fortunate as they were five years ago?

Third: food security and protection from famine should be integral to democracy.