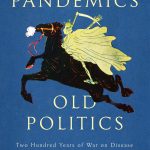 Employee of the Month April 2021: The War on Disease

During a pandemic of an infectious microbe, the idea that we are at ‘war’ with an ‘invisible enemy’ or ‘invader’ is pervasive. It’s a routine figure of speech for politicians and commentators, even some public health officials. Echoing the elaborate metaphor used for the body’s immune system’s response to an unfamiliar bacterium or virus, the notion of a ‘war on disease’ is so familiar that we don’t even question it.

But it is a metaphor, and it’s not a harmless one. It has enough resonance to be a powerful framework to guide our thinking, but sufficient connotations of imperialism, species-supremacism, militarism, xenophobia, and authoritarianism to be dangerous as well as misleading. And the martial metaphor it stops us thinking about health and disease in more accurate and useful ways.

The ‘war on disease’ has gone through several versions since its inception as a project of colonial expansion and governance 140 years ago. It began as a correlate of European imperial conquest: just as the white man was to dominate everything on the surface the globe, naming and controlling mountains and rivers, forests and the animals that lived in them, territories and the peoples who inhabited them, so too he would classify and control microbes. Disease was often a bigger obstacle to colonial expansion than was armed resistance. In turning microscopic pathogens into threats to be suppressed, through military-style campaigns of sanitation combined with the precision artillery of biomedical magic bullets, the citadels of scientific expertise in the heart of the colonial metropolises elevated homo sapiens to become the aspiring master of the natural dominion, rather than one species within it. Turning other forms of life, or quasi-life, into ‘enemies’ was an act of hubris and a challenge to a contest: what might it mean to ‘win’ such a ‘war’?

And of course the Euro-American ‘war on disease’ was waged by the white man, to make the world safe for his regime of control and exploitation. It has been pressed into the service of xenophobia and racism, excluding and stigmatizing those peoples whom we may choose to identify with a particular disease. For cholera it was poor immigrants; for HIV and AIDS it was first gay men, then Africans and Haitians, and subsequently injecting drug users and sex workers. Some choose to stigmatize East Asians over Covid-19. We insist on seeing the origins of infectious diseases ‘out there’, though it is commonly ‘our’ pathogenic distortions of natural ecosystems that generate the most lethal microbes. It was the British conquest of south Asia that gave rise to pandemic cholera, the mass mobilization for World War One that created the great influenza of 1918, and the anthropogenic disruption of the current capitalist era that are generating the quickening pace of new zoonotic infections.

In its logic, our current ‘war on disease’ resembles the ‘global war on terror’. The international apparatus of control and suppression of emerging and re-emerging diseases is designed to identify and eliminate individual microbial threats—and leave the reasons why they emerge and spread untouched. It’s a war waged precisely so that we can avoid paying attention to the ecological and socio-economic reasons why pandemics are inescapable. The global war on disease is part of our continuing project of global dominion over other life forms. It serves to protect the socio-economic Anthropocene—our connectivity, mobility, industrial farming and fishing, and commodified technologies—whereby we have created an ecosystem to which viruses and bacteria are adapting far faster than we can.

Biomedical technologies are an essential part of the response to pandemic disease, but only one part: we need to attend to the ecological, societal and political-economic dimensions of the current calamity.

Marking the publication of my book New Pandemics, Old Politics in Europe, Asia and Africa—it will follow soon in the Americas—our April 2021 ‘employee of the month’ is the ‘war on disease.’ It’s time for a non-militaristic alternative: an emancipatory public health for the Anthropocene.

Share
Tagged with: Anthropocene • Covid-19 • Employee of the month • Pandemics