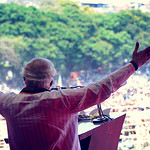 May 2021 Employee of the Month: Narendra Modi

By Aditya Sarkar and Tanya Aggarwal

This ‘award’ is bestowed on the person who has done the most to harm the cause of world peace in the last month. It started out as a quirk – a way of acknowledging that the foundation would only remain operational until ‘world peace’ was achieved. Over time, however, even as we find ourselves drifting further from that goal — we have assembled a whole rogues’ gallery of awardees: mostly men, but also some inanimate objects. We tend not to award the prize twice to the same individual/object, but Narendra Modi joins Donald Trump in receiving this dubious honour for a second time.

As the pandemic burns its way across India, the Modi government has announced that it is continuing with its vanity project to construct a new parliament building, secretariat and residence for the Prime Minister. The Central Vista project will cost the exchequer INR 20,000 crore (20 billion INR, or about 2.9 billion USD). In comparison, the government has allocated INR 35,000 crore (5 billion USD) towards vaccinating around 1.3 billion Indians, though in reality, the onus now lies on states and households to procure and pay for these vaccines. Booking a vaccination slot is complicated, and the vaccine pricing system, opaque. The electronic system meant to coordinate the process automatically excludes many poor Indians, while others are priced out by the cost of private hospitals. Searching for vaccination slots is the favourite new pastime for the upper and middle classes even as the poor postpone taking their vaccines. People are coordinating fundraisers and medical assistance, sourcing oxygen and finding hospital beds on social media, again, excluding the most marginalized.

This is not just the result of policy mis-steps or incompetence. The situation in India today is the result of deliberate choices made by Mr. Modi and the ruling Bharatiya Janata Party (BJP) to privilege the acquisition and retention of power at all costs.

The personal and the political are always intertwined, but especially so in pandemics.

“I’m gasping for air. Just imagine trying to move around, go to the bathroom, eat, or do anything while you feel like you are choking to death. Even changing my body posture from up to down, side to side knocks me out – like someone has punched me. Just try shitting while gasping for air when your new gold toilet seat at Central Vista is ready. It’ll be a fun experience.”

“I am surrounded by nurses. [I] see doctors only once in about 24 hours, not because they’re not doing their jobs but because the system is so badly stretched. And while healthcare workers are on their toes all the time, its very much a question of looking out for yourself. Help them – inform them when your intravenous drip is over, o2 is not working, etc. Nurses are the real heroes here. They are running this place…And of course, all the kitchen/ housekeeping guys. Everyone in PPE and smiling all the time. It’s their pictures that need to be splashed across billboards and vaccination certificates – not the photo of a “leader” who has completely abdicated his basic responsibilities.”

And we are the privileged. Able to afford and get to a hospital bed. We live in the capital city of the country with better healthcare than most other places. If Delhi is at breaking point, what is happening elsewhere in the country?

The Modi government’s failures in dealing with Covid have been well documented by Arundhati Roy, Ramchandra Guha, and scores of journalists working on the ground. But they are worth recounting briefly. In March 2020, when there were only a handful of Covid cases in the country, Mr. Modi imposed a brutal lockdown with only 4-hours notice. Struggling to meet their food and cash needs, and with no transportation, desperate migrant workers streamed back to their towns and villages – several died in road accidents, exhaustion due to walking long distances, and from dehydration, hunger, and police brutality. The economy contracted by almost 24 per cent (between April and June 2020), with the poorest and those working in the informal sector most severely affected. Like many other authoritarian leaders, Mr. Modi used the pandemic to jail political opponents and crack down on dissent using draconian anti-terrorism laws, even as his party toppled elected governments.

The second wave of Covid in India, however, is testament to Mr. Modi’s desire to both play to his Hindu nationalist base, and win elections. By January 2021, he declared that India had effectively contained the pandemic. In fact, even despite the surge in cases, India’s covid taskforce effectively stood down in February. Critical health infrastructure created to manage the first wave of the pandemic was dismantled at about the same time. Mr. Modi also pushed ahead with (or at the very least, permitted) the holding of the Kumbh Mela in March and April, where millions of devotees congregated. Cancelling it would not have been perceived favourably by his Hindu right wing base. In fact, the chief minister who suggested restricting the Kumbh was replaced with someone more amenable. A number of prominent religious leaders died of Covid, and many/most of those returning from the mela continue to test positive for Covid.

Most egregious of all, perhaps, were state elections in West Bengal, a state that the BJP was hopeful of winning. Elections in the state were organized over eight stages between end-March and end-April – to allow Mr. Modi and the Home Minister Amit Shah to make multiple trips and campaign extensively across the state, at packed election-rallies. Mr. Modi said he was ‘elated’ to see the size of the crowds assembled to hear him. He did not wear a mask. Most of those in the crowd did not either. The BJP was trounced by the incumbent TMC in those elections but in the weeks that followed newspapers reported that nearly one in every two persons tested in Kolkata was covid-positive.

In the meantime, and despite warnings of likely oxygen shortages as long ago as March 2020, few concrete steps were taken: widespread oxygen shortages across the country have resulted in the deaths of scores of covid patients. The vaccine procurement strategy is in shambles, with scarcity expected until July, at the very least. And after having centralized fiscal and administrative power in unprecedented ways, Mr. Modi has suddenly passed the burden of procuring vaccines on to the states, and insists that they be responsible for announcing localized ‘lockdowns’.

The severity of the second wave of the pandemic in India is not an accident. It is the direct consequence of Mr. Modi’s deliberate and careful hollowing out of India’s institutions and centralization of power, unwillingness to listen to contradictory viewpoints, and efforts to win elections, no matter what the human cost.

Perhaps the real tragedy is that we will never know the true cost of this pandemic. After all – we still do not know how many people died in India from the influenza pandemic of 1918-20, though some estimate the number at around 20 million.

“Men carried dead bodies on their shoulders by the score. There was not a single hour of the day when a few dead bodies were not carried outside the city to be buried. Soon the graveyards became full, and it was difficult to find even three yards of ground to put a person in his final resting-place. In life they had had no peace, and even in death there seemed no hope of rest. A new cemetery was made outside the city where people buried relations by the score.

The Hindus were lucky that way. They just went to the bank of the sacred Jamuna, cremated the dead, and threw away the ashes and unburned bones in the water. Many were thrown away without a shroud or cremation. They were mostly the poor. Yet in death it was immaterial whether you were naked or clothed or burnt or thrown away to be devoured by vultures and jackals.”

A hundred years on, not much has changed.

“The cremation ground was like a rotisserie. I’ve never seen anything like it. Bodies just lying there, in the sun. A chain of ambulances just coming in to drop off bodies for cremation. No one should have to see this sight.”

Reports from crematoriums and graveyards suggest that deaths are being massively undercounted, and the real death tolls can be anywhere between five and ten times the reported number (some states ruled by the BJP have even tried to crack down on the reporting of cremations). The human cost of Covid in India’s villages and small towns, in particular, is likely to remain unknown.

Will Mr. Modi be held to account politically, for this catastrophe? This is unclear. Indian voters have been remarkably forgiving of Mr. Modi’s failures in the past (after demonetization, for instance), and the general elections are still three years away. The recently concluded state elections do not hold clear lessons either. The BJP (or its allies) lost in Kerala, West Bengal and Tamil Nadu – but that may have had more to do with the particular dynamics of these states rather than Mr. Modi’s mishandling of the pandemic. Elections in Uttar Pradesh, India’s largest state, are due in 2022. Those results may be a better indicator of whether voters are finally beginning to turn on Mr. Modi.

Irrespective of what happens to Mr. Modi, the scale of this tragedy means that we, the people of India, will have to account for its personal and political costs in the years to come. Perhaps in ways we do not yet understand.

“We tried to do everything right, Mr. Modi. When are you going to acknowledge that you went wrong?”

Aditya Sarkar is an independent researcher, who has worked with the World Bank, the International Labour Organization, the Open Society Foundations, and the World Peace Foundation. He is qualified as a lawyer in India and in England and Wales, and holds a master’s degree from the Fletcher School of Law and Diplomacy at Tufts University and is a graduate of the National Law School of India University in Bangalore, India.

Tanya Aggarwal is a mother and a lawyer, with degrees from NLSIU Bangalore and Harvard Law School, currently battling COVID-19 in a hospital bed in New Delhi, India.

Share
Tagged with: Covid-19 • Employee of the month • India