Development Partnerships or Transactional Politics? US taxpayers are killing Gazans 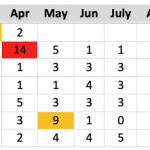 Who has died of COVID-19-related causes in Massachusetts’ prisons?: a discussion of data discrepancies

In the year since COVID-19 pandemic first emerged in Massachusetts’ prisons, the population of incarcerated people in the state has suffered high infection rates, severe isolation during lockdowns, and enormous gaps in essential programming, like drug rehabilitation, mental health support and educational programming. This essay focuses solely on the people incarcerated within the Commonwealth’s prisons, operated by the Department of Correction, under the Executive Office of Public Safety and Security; it does not include analysis of the Houses of Correction, or jails, operated by county Sheriffs’ offices.

The answer is because, across the three avenues for making data available to the public, the Department of Correction (DOC) has reported contradictory information about when and where COVID-19-related deaths have occurred. Knowing when and where people have died is crucial information: during a pandemic, it sheds light on viral pathways; state-managed institutions, like prisons, act in the name of the public and so are public matters of concern; and granting dignity in death requires–at a minimum–accurately tracking who has died, when and where. Further, no matter the context, how we treat the dead is a fundamental measure of a society’s decency.

The DOC information about COVID-19-related deaths among the state incarcerated population occurred became public in three ways: (1) in news media, as DOC responded to journalists’ queries; (2) through court-ordered reporting following an April 3, 2020 decision by the Massachusetts’s highest court, the Supreme Judicial Court (SJC); and (3) in response to records access requests, filed under the Massachusetts Public Records Law (M. G. L. Chapter 66, Section 10). I submitted five such requests in August, September, and December 2020, and in January and April 2021.

Let’s look at the three sources.

Media reporting: This essay addresses deaths made public through media reporting primarily from the period of March 1, 2020 – June 23, 2020; following this date, DOC began including data on deaths due to COVID-19 as part of the SJC-ordered reporting. The media reports before June 23 are from several journalist sources. I was unable to verify the process of reporting from all of them. However, I could confirm was Deborah Becker (WBUR), who told me that WBUR often heard of deaths from a range of sources, but only reported on those that were confirmed by the DOC.[i] Excluded from the below analysis is media reporting on incarcerated people who were granted medical parole while on their death beds. Two such instances have been documented.

SJC-ordered reporting: On April 3, 2020, the SJC issued a decision on a case brought by American Civil Liberties Union of Massachusetts (ACLU), the Committee for Public Counsel Services, and the Massachusetts Association of Criminal Defense Lawyers, who petitioned the Court to consider special measures related to responding to COVID-19 within prisons and jails (county Houses of Correction). As part of this decision, the Court mandated that the DOC (and all county sheriffs) file reports on, for instance: the total numbers of incarcerated/detained people, numbers tested for COVID-19 and the number of positive cases among the populations under their jurisdiction. This decision was amended on June 23, 2020, to require reporting on deaths due to COVID-19-related causes (among other changes).

The public can access the SJC-ordered data in two places. First, the ACLU developed an online portal (Tracking COVID-19 in Massachusetts Prisons and Jails) to enable public access to the data updates (updates provided daily from April – July 2020, and from November 2020  – April 2021). Second, weekly Special Master reports are available through the SJC website. The weekly reports only began including data on deaths due to COVID-19 on July 17, 2021.

Table 1.1: How has the DOC provided public access to information on COVID-19 related deaths of incarcerated people? Overview of three sources discussed in this essay, documenting deaths in MADOC March 1, 2020 – March 31, 2021.

Data released through a public records request: In response to several requests for public access to documents, the DOC provided me with data in: August, September, and December 2020, and in January and April 2021. The DOC promptly responded to my requests. The first batch of data (August 2020) included information for all deaths of incarcerated people from January 2015 – August 2020. The data revealed a significant spike in deaths in April 2020. In fact, it was by far the highest month for deaths over the six years of data I received, and remains so into 2021 (Table 1.2 below). I discussed the data in previous blog essays on August 27th, September 1st and September 8th.

While Table 1.2 includes all deaths of incarcerated people, not just those reported as directly related to COVID-19, the historic spike in April 2020 and extended period of the second spike provide evidence of the high toll that the pandemic exacted on people in prison. In my writing last September, I emphasized the need for an independent report on how the DOC handled the Spring spike, if for no other reasons than to provide insight on response that might alter the future path of the pandemic through the prison system. This recommendation was not heeded.

Please be advised that while the DOC promptly reports the preliminary cause of death when that information is clear from an inmate’s medical records, this chart is an administrative log that is not updated with final cause of death until it is formally received from the medical examiner, a process that may take more or less time depending primarily on when the specific facts of each death are medically established.

All of the data discussed above provides only a glimpse of deaths that occurred during the period of the pandemic inside Massachusetts’ prisons. To cross-check the information, I began with any death reported as COVID-related from all three outlets for DOC data, and then sought to cross-check these deaths against the data available in the other two outlets. Because most of the deaths recorded in the public access to records release dataset do not include cause of death, when cross-checking with that dataset, I simply sought to verify if a death occurred at all on the same date and from the same prison.  While many people who perish while incarcerated die in hospitals, the data DOC released includes the names of both the prison and the actual location of death. (Below, the names of prisons are abbreviated, a full list of prisons is included in the endnotes[ii]).

As is noted below, there were some concerning discrepancies, all of which are highlighted in yellow.

Table 1.4: Comparison of DOC Reporting on COVID-19-Related Deaths of Incarcerated People, by Outlet

1. Did someone die on April 12 or April 13, 2020? On April 13, WBUR journalist Deborah Becker reported via Twitter: “Massachusetts DOC reports a 4th COVID 19 prisoner death at Massachusetts Treatment Center in Bridgewater.” The different dates recorded for this death are likely the result of the difference between the date of death and date of media announcement.

2. Was this death related to COVID-19 or not? Data released to me through the public records requests shows a death on August 3, 2020, due to COVID-related causes at MTC on April 21, 2020. In subsequent data, beginning with that released on September 4, 2020, the cause of death for this person is no longer described as “COVID,” instead it is changed to “liver failure, hepatocellular carcinoma.” I could not find any news reporting when this death occurred, however, by the time of a May 15, 2020, article, primarily focused on the death of a man at MCI-Shirley (see below note #3), journalist Deborah Becker referenced the fifth death of an incarcerated person at MTC. Becker, Deborah. “8th Mass. DOC prisoner Dies of COVID-19” WBUR (May 15, 2020).

3. Is the date wrong or is the prison wrong? See Becker, Deborah. “8th Mass. DOC prisoner Dies of COVID-19” WBUR (May 15, 2020).  Becker reported that an incarcerated man at MCI-Shirley died due to COVID-related causes on May 15, 2020. The data from the public records request includes a death at MCI-Shirley on May 13 (cause of death noted with, “Per OME –cannot be released/referred to DA’s office”), and one at Souza-Baranowski Correctional Center on May 15, 2020 (however, cause of death is noted as “hypertensive cardiovascular disease”).

5. Is this an oversight in the Court-ordered reporting? The data released through the public records request documents the death of someone at OCCC on January 4, 2021 due to COVID-related causes. This death does not appear in the SJC-mandated reporting data. It does appear in a January 11, 2021 news article by Cody Shepard in The Enterprise, “2 Bridgewater prisoners die after contracting COVID inside prison experiencing outbreak.” The Enterprise (January 11, 2021).

8. Why is the location of death inaccurate; or are these not the same deaths?The SJC-mandated reporting includes the death of a man at BSH on March 19, 2021. The public records access dataset includes a death on March 19, 2021, but the person is cited as incarcerated at OCCC (although the death occurred at LSH).

Previous accounting from journalists and SJC-mandated reporting of the total number of COVID-19-related deaths of incarcerated people in Massachusetts was 21. If we include all deaths documented in at least one of the above outlets, the total is 22. This does not necessarily mean that more incarcerated people have died of COVID-19 than DOC has publicly admitted; however, it does mean that there are discrepancies in how DOC has reported COVID-19-related deaths to the media, the SJC, and public records releases.

Why is it important to have clarity and consistency in data, especially related to deaths? In the first instance, all people deserve dignity in death, no matter the situation or circumstances of dying. At the most basic level, their deaths count, and the accounting should be accurate.  People who died while incarcerated were the under direct care and responsibility of the state. Because the state has claimed this responsibility, the lives – and deaths – of incarcerated people are of public concern. Further, these numbers are not overwhelming. There is no reason that the DOC should be unable to produce an accurate public record. Finally, while it has been extremely difficult to verify the accuracy of information released by the DOC on some matters, like testing and positive cases, the inaccuracies regarding deaths give credence to concerns that the overall data DOC has released on the COVID-19 outbreaks in Massachusetts’ prisons contains flaws.

I shared a copy of this essay with the Department of Correction prior to publication and they did not respond.

[ii] List of Massachusetts prisons cited in this essay: