I Miss My Comrades – Especially at These Times Bombs and Dollars: Arms trade should always consider human rights 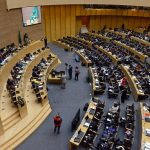 African leaders promised to “silence the guns” by 2020. Today, it is Africa’s voice for peace that is silent.

Just two decades ago, when the G7 leaders assembled, it was standard for Africa to be on the agenda, represented by an African leader who was forging a new partnership between a democratizing and developing continent and the industrialized world. The New Partnership for Africa’s Development (NEPAD) was, like the G7’s new Build Back Better World (B3W) initiative, a values-driven, high-standard, and transparent development partnership.

At the recently-concluded G7 Summit in Carbis Bay in Britain, one of the four non-G7 leaders invited was an African: South African president Cyril Ramaphosa, who spoke of the need for fairer access to vaccines for poor countries. But African issues were on the G7 agenda only in the most humiliating manner. The continent was the focus of discussions on starvation, atrocity and conflict—that African leaders were incapable of addressing. Paragraph 54 of the communiqué deals with the Ethio-Eritrean conflict and man-made famine in Tigray and paragraph 55 with the crisis in the Sahel.

This was not Africans’ expectation in May 2013. On the fiftieth anniversary of the founding of the continental organization (which was established in 1963), African heads of state and government adopted a solemn declaration which proudly announced their intent to:

“Endeavour for Africa to take its rightful place in the political, security, economic and social systems of global governance towards the realisation of its Renaissance and establishing Africa as a leading continent; [and] advance international cooperation that promotes and defends Africa’s interests, is mutually beneficial and aligned to our Pan Africanist vision.”

“Our determination to achieve the goal of a conflict-free Africa, to make peace a reality for all our people and to rid the continent of wars, civil conflicts, human rights violations, humanitarian disasters and violent conflicts, and to prevent genocide. We pledge not to bequeath the burden of conflict to the next generation of Africans and undertake to end all wars in Africa by 2020.”

The intervening years have seen a terrible retreat from that commitment.

In the World Peace Foundation report, African Politics, African Peace, released in 2016, we identified key challenges facing the continental peace and security architecture. It was an optimistic report. We identified the key role of the AU as agenda setting:

Starting with the OAU’s 1990 review of how the continent needed to reform to face a transforming world—detailed in this paper by Said Djinnit and El-Ghassim Wane—Africa had adopted a cascade of new norms and principles.

One of these was the concept of “sovereignty as responsibility”, developed by Francis Deng, to move beyond the old discredited notion of sovereignty as a shield behind which governments could violate the rights of their citizens.

Today we’re seeing a regression from that principle, notably with the government of Ethiopia rejecting African and other international calls to refrain from international crimes on the grounds that it has the sovereign privilege to conduct its domestic affairs as it wishes.

Sovereignty as responsibility is an African principle that became global. It is the concept that underpins the “Responsibility to Protect.” African leaders cannot complain if global leaders, such as the G7, take it more seriously than they do.

The AU’s Protocol Relating to the Establishment of the Peace and Security Council, the Solemn Declaration of 2013, and the practices of the PSC including the expeditious response to conflicts as and when they erupt, are all fundamental norms, principles and practices for conflict prevention and management.

Seven months after the conflict erupted in Tigray, the AU PSC has not yet put it on the agenda. The three African members of the UN Security Council have not supported efforts to bring the war and impending famine to the UNSC, either directly as a threat to international peace and security, or through the mechanisms provided by resolution 2417 on armed conflict and hunger.

Additionally, the Chairperson of the African Union, Moussa Faki, obstructed the efforts by the north-east African regional bloc, the InterGovernmental Authority on Development, to put the conflict on its agenda in December.

The formulation, “African solutions to African problems” is meaningful when there are African attempts to find solutions. When there are no such African efforts, Africans cannot complain when others take the initiative.

In response to the genocide in Rwanda—and the spectacular international failure to intervene to stop it—the OAU set up the International Panel of Eminent Personalities, whose report recommended the principle of “non-indifference” to genocide and crimes against humanity. That was a precursor to the “Responsibility to Protect” and is enshrined in Article 4(h) of the Constitutive Act of the African Union: “the right of the Union to intervene in a Member State pursuant to a decision of the Assembly in respect of grave circumstances, namely: war crimes, genocide and crimes against humanity.”

There are sound reasons to suppose that the current crisis in Tigray constitutes “grave circumstances.” Those grave circumstances might have been avoided had African leaders fulfilled their responsibilities early on in the conflict, before the war, atrocities and starvation escalated to their current level. African leaders cannot complain if, having neglected their treaty obligations and ignored the norms so painstakingly crafted over thirty years, a crisis reaches a point at which others take coercive actions.

Beginning in 1997, the OAU began to adopt measures to limit military coups and other forms of arbitrary government. Article 4(p) of the Constitutive Act of the AU is “condemnation and rejection of unconstitutional changes of governments.” This principle was undermined by a succession of constitutional amendments by African leaders to extend their terms in office.

There’s a flicker of life in the norm—but not much more. A putchist won’t be rejected outright. Instead he will be asked to share power with civilians.

In Mali, the AU and the West African regional bloc, the Economic Community of West African States (ECOWAS) compromised after the August 2020 coup in which Colonel Assimi Goïta illegally seized power—they permitted him to continue as vice president. Last month he shook off the partnership with civilians and took power again. The AU correctly suspended Mali and is threatening sanctions. In Chad, after the death of long-time military ruler President Idriss Déby in April, his son Mahamat immediately took power, contemptuously disregarding the constitution. French President Emmanuel Macron openly supported this and President Felix Tshisekedi of the Democratic Republic of Congo said that a ‘firm hand’ was needed to prevent disorder in the country. Fortunately, the AU Peace and Security Council pushed back and demanded a transitional hybrid government leading to new elections.

It’s a sign of what might be possible if African leaders were to take their solemn commitments at least half seriously.

But everywhere we turn, there’s every indication that political expedience is prevailing over the rule of law. Nigeria’s President Muhammadu Buhari, faced by rising insecurity, is threatening a return to civil war. The Zimbabwean leadership appears intent on turning the judiciary into an instrument of arbitrary power. The Constitution requires the Chief Justice to retire at seventy. When Chief Justice Luke Malaba, reached that age last month, President Emmerson Mnangagwa extended his appointment by five years, flouting a decision of the nation’s High Court. Kenya’s President Uhuru Kenyatta has been trying to extend his powers of appointing executive officers and creating seventy new parliamentary constituencies—the so called “Building Bridges Initiative.” It was struck down by the High Court as unconstitutional. In response, Kenyatta has turned his wrath on the judges.

Africa’s leaders still have a chance to become respected by African citizens and partners on the world stage. Their path to achieve this lies through reasserting those norms and principles they established when the African continent stared into the abyss 25 years ago. If they continue to show moral cowardice and individual opportunism then they will betray the promise of peace, justice, security and democracy on the continent.

Share
Tagged with: African Union • AU • Employee of the month