Bombs and Dollars: Arms trade should always consider human rights From Apologies to Atrocities: How to make sense of leadership statements in Ethiopia 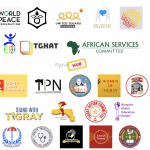 Sexual violence is the brutal hallmark of the conflict that broke out in Tigray, Ethiopia last November.

Women and girls have been subjected to rape, gang rape, abduction, and mutilation of their sexual organs. Horrific reports tell of women having their vaginas cauterised with hot metal rods. The youngest survivor has been a girl aged only eight, the oldest have been women in their 70s. Their experiences and injuries have been documented by journalists, NGOs, and healthcare professionals. Their credibility is beyond question and we stand in solidarity with them.

The perpetrators are overwhelmingly Ethiopian and Eritrean soldiers and Amhara militia. Language used by the assailants makes clear that these are not random attacks. They are targeted at the women because of their ethnicity, because they are Tigrayan, with the aim of rendering them infertile. The attacks are integral to the conflict.

There have been prominent calls for an end to the abuse. The head of the International Committee of the Red Cross has called it the worst the world has seen in 20 years. UN agencies have repeatedly called for independent investigation, and one change.org petition has nearly 150,000 signatures. But so far, those responsible for gross violations of international humanitarian laws and resolutions outlawing the use of sexual violence in conflict have not been brought to account. There’s been no justice for the women of Tigray.

June 19th is the UN’s International Day for the Elimination of Sexual Violence in Conflict. If it is to stand for anything, the UN Security Council must set up a tribunal to investigate the allegations of sexual violence in Tigray as a war crime, a crime against humanity, or a constitutive act of genocide. Moreover, its members must suspend budget support to the Ethiopian and Eritrean federal governments until their forces have withdrawn.

Failure by the international community to act would undo the progress made so far in eliminating sexual violence in conflict. It would give a green light to regimes that deploy this barbaric weapon of war. And, it would be a betrayal of the women of Tigray whose words we believe and whose courage we salute.