The Unwinnable War on Disease New Realities in Ethiopia 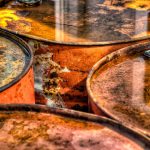 Can the World Go Green Without Destabilizing Oil-Pumping Nations?

The planned shift to renewable energy will risk violence in fragile oil states.

This article was originally published on the United States Institute of Peace (USIP) website on June 23, 2021. Read the full article, Can the World Go Green Without Destabilizing Oil-Pumping Nations?

Amid the dizzying acceleration of headlines and debate about the vital global transition to renewable energy, new research shows how that change could destabilize dozens of fragile states that depend heavily on oil exports. The new study underscores that governments and international institutions will need to guard against risks that the shift away from carbon-heavy fuels will inadvertently upset political balances and potentially ignite violent conflicts in a swath of nations from Venezuela to Nigeria to Iraq and beyond. Above all, the research suggests, the world must avoid an unplanned “traumatic decarbonization” of these economies.

The U.S. recommitment to the Paris climate accords — plus summit conferences called by the Biden administration, the G7 nations and NATO — reflect the reality that countries are moving to cut their oil consumption in hope of constraining the planet’s warming. Politicians in the world’s more comfortably developed nations focus on managing this transition to serve their own economies and polities, meeting costs and generating jobs, with an eye toward winning the next election.

Yet fragile states that produce a large share of the world’s oil face a different, more acute problem set. Their leaders, rarely confronted with true electoral challenges, pursue political survival instead by cutting deals among contentious and often violent elite factions. The deals typically involve material benefits linked to the cash from oil exports. When these countries face a sudden cutoff of their cash flow, leaders must either bargain — or battle — for slices of a smaller pie.