New Realities in Ethiopia De-escalating the War in Ethiopia: Start with the Rhetoric 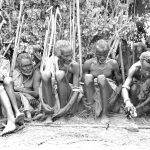 AKSUM PEACE ACCORD: A reality fantasy

The present ‘reality fantasy’ (Stephen Tyler) is based on the knowledge that a paragon – an excellent example – is well suited to serve as a model for action. In this light, a paragon for peace making in the Horn of Africa may well be a peace ceremony held 1993 at Arbore, southern Ethiopia.

Initiator of this peace ceremony was one of the political leaders of the Arbore, Grazmach Surra Gino. He called on all warring groups to attend, enlisted the help of local administrations and NGOs for hosting the participants, and also invited scholars from the South Omo Research Center to witness and report about the event. This is what he said to me:

“German son, people are all the same,
only the colour is different.
The foreigner is white, people like I are black.
Being human, how can they spill each other’s blood?
This disturbs me.
Therefore I now want to reach the whole world.
Yes, the whole world.
Today you must help me reach all people on Earth.
When they have taken it from you,
this will be my day.”

Taking these words as encouragement and a mandate, I now proceed to outline – as briefly as possible – how a symbolic form of peace making may help consign the war in Tigray to the past, and open the way to a peaceful future.

‘Genius loci’ or ‘spirit of the place’

The peace ceremony at Arbore has shown that the ‘spirit’, the historical, ecological, and transcendental qualities of the place of peace making are highly significant. For Tigray it is the ‘genius loci’ of Aksum, the capital of the ancient Aksumite Empire, which seems to be particularly well suited to serve as a place for peace making.

Participants at the Aksum Peace Accord

As the Arbore case shows, not all disputes need to be settled in detail before symbolic peace making can take place. However, an effective ceasefire must be in place, and all parties should share a conviction that the most menacing issues have been resolved.

Topics of the peace accord

(1) Expression of grudges: The actual peace ceremony at Arbore was preceded by a meeting where representatives of the different warring group recalled the suffering they had endured at the hands of others, and insisted that their grudges should not be forgotten. The Aksum Peace Accord would include such a – cathartic – expression of previous grudges in analogous fashion.

(2) Destruction of tools of war: Although the different groups in southern Ethiopia had fought each other with modern rifles they destroyed and buried traditional weapons as a more powerful symbol of disarmament. The same would apply to the Aksum Peace Accord.

(3) Revaluation of honour and shame: During some of the speeches held at Arbore it was mentioned that in the future the traditional praise and glorification of killers should be abandoned. A similar condemnation of killing would be proclaimed at the Aksum Peace Accord.

(4) Cursing and blessing: At the climax of peace making in Arbore, representatives of each group cursed and blessed in their own language and with their own style, generating a heightened feeling and conviction of peace and well-being.

(5) Tools for economic and social reconstruction: Towards the end of the Arbore peace ceremony, the hosts handed out tools of production (digging sticks and herding whips), and of social control and general welfare (ritual staffs) to representatives of each of the attending groups. As host of the Aksum Peace Accord, the Tigray delegation would similarly present gifts to the formerly warring parties. Rather than whipping wands, digging sticks and ritual staffs, they would offer substantial grants for social and economic reconstruction. These grants would come from the international community, i.e. from nations with particularly friendly relations with Tigray and all its neighbours.

(6) Joint feasting: The peace ceremony at Arbore ended with a celebratory meat feast at which all the previously warring groups took part. The symbolism of sharing food is so universally known that it need not be further explicated.

The 2020 -2021 war has negatively affected the image of each warring party. The Aksum Peace Accord will serve to regain international prestige.

We also learn from the Arbore peace making that the time between the announcement and the actual performance of a peace ceremony can be very fertile. It helps the conflicting parties to focus on the promises of peace rather than war. Therefore, the sooner the plan and support for an Aksum Peace Accord are made and announced, the faster the process of reconciliation will begin, and peace will return.

Below follow the final blessings – in seven different languages – pronounced at the peace making in Arbore. They have been recorded in the film “Bury the Spear. Cursing War and Blessing Peace at Arbore, southern Ethiopia.” Their expressive power may well be able to inspire the Aksum Peace Accord once eventually it becomes a reality:

Grazmach Surra Gino (Arbore)
May God sweep war out of our country.
May God make people live in harmony with each another.
May God make their stomachs one.
May God keep quarrelling away.
May He pull away the harness of rain for us!

Kaile Akkol (Nyangatom)
Let this land be peaceful.
Let there not be bad things,
let only good things come.
Let there be peace.
Let this rebirth be good!
Let livestock and crops all be well!

Walelo Duba (Konso)
May Ethiopia be peaceful together!!!
The wrong we mistakenly did yesterday,
let it disappear from us today.
From today on let it go away.
From now on let evil disappear from us.
Let our enemies who played against us disappear.
Let Ethiopia move together !!!!

Yembo Dele (Tsamai)
We who are sitting, let God hear all what we say.
Let God make our mouths one, let everything be one.
Let war go away!
Let God hear our words and make our tongues one.
Let God hear and destroy war.
I am a Tsamai – a farmer – let me smell farming.
God gave us sticks to herd cattle and goats,
so let God give us livestock.
Let Tsamai be peaceful.
Before, the Borana, Wata and we drank from one gourd,
let us return to one drinking gourd.

Gelgelo Tore (Wata)
May our family be peaceful!
Day and the night be peaceful.
May the people of  Borena have peace.
May the whole of Ethiopia be at peace !!!
We have peace!
May the times be peaceful, in night and day.
We have passed bad times,
now we have given each other peace.
Let the sleeping place at the cattle camps be peaceful.
The people of Borena are all in peace.
We have refused war, we have sent it away.

Galafo Lale (Karo)
Won’t evil go away?   – Let it go!
Won’t go away with the setting sun?
Won’t evil go away?
Won’t good come?
Let us love one another.
Peace!
Let war  go away
from Bume, Kara, Geleb, Konso, Boran
and all these lands in this EPRDF time!
Let war disappear,
let the land be healthy.
Let us talk together, play together, laugh together!

Ivo Strecker is Professor Emeritus of Cultural Anthropology at the Johannes Gutenberg University of Mainz. He has done long-term fieldwork with the Hamar of southern Ethiopia, which stimulated his theoretical interest in symbolism and rhetoric. Together with Stephen Tyler (Rice University) he initiated the International Rhetoric Culture Project. He has also taught at several Ethiopian universities, founded the South Omo Research Center and currently is editor of the “Guardians of productive landscapes Project” film series.