Tigray: Time for the UN to Report on Attacks on Humanitarian Facilities and Personnel July 2021 Employee of the Month: Abiy Ahmed 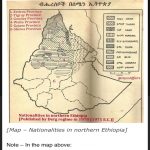 The Tigray-Amhara Boundary Should be Resolved by Constitutional Means

The ethno-federalism arrangement of Ethiopia established in 1991 created new regions in Ethiopia to replace the previous administrative provinces. One of them is the Amhara Regional State, which is composed of parts of former geographical administrative regions of Begemeder (Gonder), Wollo, North Showa, and Gojjam. Its creation has taken the dominant ethnic Amharas into consideration, while acknowledging some minority ethnic groups, such as the Agew and Kimant, that also reside within the region’s borders. The same principle was followed in establishing other regional states that were named after the dominant ethnic group inhabiting their respective regions.

In Ethiopia, the delineation of internal boundaries has changed from one government to the next, according to both the immediate political situation and also the ideological leaning of the ruler. The delineation made by Emperor Haile Selassie was different from that made by the Derg regime which was different again from that of the EPRDF coalition as enshrined in the 1995 Federal constitution. As a result, the historical internal territorial arrangements of Ethiopia have never been static and will likely remain dynamic in the future too.

The Federal Constitution of 19951 transformed Ethiopia from a unitary state to an ethnic federal system. The regions within the Federation were delineated on the basis of “settlement patterns, language, identity and consent” of the people. The new boundaries were often contentious. As a result, Ethiopia has witnessed numbers of territorial clashes among different ethnic groups, and between ethnic regional states.

However, Amhara Regional State has initiated more territorial conflicts with more severe consequences than any other. It has created groups that seek to claim territories and instigate conflicts within border areas of the neighboring Oromia, Benishangul, Afar and Tigray regional states. They claim some parts of former Gojjam, Shoa, Wollo and Gondar provinces. The Amhara Regional State even quarrels with Sudan over territory, claiming the al-Fashaga area. Some scholars have decried it as “expansionist”.2 The strategy that leaders of the Amhara Regional State and other Amhara elites use is assimilationist as it categorizes people in the contested border areas as “Amhara”, even if they are ethnically not Amhara at all.

There’s a logical inconsistency in the Amhara elite agenda. Some of them claim territory on the basis that it is ancestral Amhara land, based on where princes in previous eras established their boundaries along defensible perimeters such as river valleys. Assimilationists claim territory on the basis that the people in those lands will in future become Amharas through assimilation. One argument is based on the past, the other on the future. They ignore the rationale behind the current regional delineation of the Federal Republic of Ethiopia, namely the cultural, and demographic criteria used for constitutionally approved delineation of ethnic federal states.

There’s another inconsistency too. While Amhara leaders are engaged in an expansive ethno-nationalism by establishing Amhara “reclaimer” committees, such as the Wolkait Amhara identity committee, they also advocate the reestablishment of a unitary Ethiopia in accordance with a pan-Ethiopianist ideology in which ethnic identity is not meaningful.

The justification for the inclusion of Wolkait and Raya under the administration of Tigray include the following facts:

NB. Error in the number of Tigrigna speakers of Ofla.

Furthermore the 1994 census5 report indicates that 96.5% of the inhabitants of western Tigray were ethnically Tigrayans while only 3% were Amhara,  which changed to 92.3% and 6.5% respectively in the 2007 census. The reduction in the Tigrayan composition and the increment in the percentage of the Amhara population might imply that there has been some influx of Amhara ethnics in these contested areas.

These recent data clearly indicate that settlement patterns, language, and identity factors have been considered when these areas were included under the administration of Tigray Region.

Amhara elites, nevertheless, try to justify their claim by magnifying the former feudal-physical boundaries and ignoring the criteria used for ethnic federalism.1 They usually mention some historical documents that describe physical attributes, such as the Tekeze river, as a reference point to locate where past rulers of Amhara and Tigray kingdoms established their boundaries, without reference to the communities inhabiting the lands. Those old feudal boundaries were not fixed either. Historical records indicate that some places were under the rule of Tigrayan princes before they were under Amhara overlords. One example, almost 200 years ago an account of Abyssinian kingdoms identified areas which were at that time under the rulers of Tigray, which are currently claimed by Amhara leaders.6

Though important to historians, the use of such archival evidence for solving the current problems of territorialism is unwise. Disputes over historical documents such as this can never fully be resolved. The point is, which communities have inhabited the area in recent times.

As the war between Tigray and the Federal Government of Ethiopia erupted, Amhara forces marched to “reclaim” areas in western and southern Tigray that had come within the boundaries of Tigray Regional State in 1991. Their “reclaim” meant that the people there are ethnically and historically Amhara, which contradicted the facts, and also claimed that the 1991 constitutional demarcation was an illegal annexation, that should be reversed by force of arms. Those forces committed war crimes and evicted thousands of Tigrayans, such that U.S. Secretary of State Antony Blinken described the situation as an the act ‘ethnic cleansing’.7

In the aftermath of the recapture of Mekelle by the Tigray Defense Force, the Amhara leaders have intensified their war rhetoric and are mobilizing thousands for war rather than considering dialogue as an option. They are explicitly determined to Amharanize Wolkait and Raya areas by force. The region is preparing to fight a destructive war with Tigray, ratcheting up the rhetoric of hatred.

Unconstitutional adjustment of territories by force should not be tolerated. It is reasonable for Tigray to demand that the situation be returned to the status quo ante before November 2020, at which point Tigray and Amhara should be open to resolve differences via dialogue. For peace to prevail, the questions need to be resolved in a constitutional manner.

The historical, cultural, and demographical facts prior to 1991 indicate that Wolkait and Raya have been inhabited and dominated by ethnic Tigrayans. Hence their inclusion in Tigray by taking settlement patterns, language, identity as criteria is justifiable. However, this does not mean that these areas do not also belong to other Ethiopians. Wolkait and Raya belongs not only to Tigrayans, but also to Amhara and Oromo and every citizen in the sovereign state of Ethiopia as long as Tigray is a part of the Ethiopian Federation. By the same token, Bahir Dar does not belong just to the Amharas, but also to the Tigrayans, Oromos, the Sidamas and so on as long as the current federal arrangement continues.

The Government of Tigray statement with preconditions for a ceasefire of July 4 indicates its willingness to solve differences of internal territorial disputes according to the rules and regulations specified in the constitution. If that is the case it would be wise for leaders of the Amhara regional states and elites not to beat the drum for a war to realize territorial reconfiguration by force.

3 Provisional Military Administrative Committee, Government of Ethiopia:  Map of the ethnic composition of Northern Ethiopia in 1978.

Dereje T Asefa (PhD in Risk Management) is a member of Union of Tigrayans in Norway (UTN) and an expert in Environmental and Social impact Assessment (ESIA), in Oslo, Norway.