Ethiopia: Definition and politics of ceasefire Not Impartial, Not Principled, Non-Starter: African Union Mediation in Ethiopia 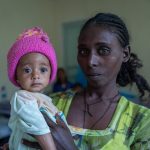 See No Evil: How the United Nations is Blind to the Famine in Tigray

For three months, international estimates of the number of people facing humanitarian emergency or famine in Tigray have not shifted. On July 2, the UN said that 400,000 people were in “famine-like conditions.” On August 26, the UN said the same thing. That’s not because things haven’t changed for the worse. Every indication is that food has got scarcer and people are starving.

The reason why the official numbers are unchanged is because the United Nations leadership has chosen not to follow commonsense and its own expert opinion that the food crisis must by now be at very high risk of major famine. They can be blind because the information blackout is so complete.

When the last great famine struck Ethiopia 37 years ago, a senior NGO official lamented “that rather curious phenomenon that people will not believe a famine until they see it.” It took a BBC film of mass starvation for embassies, the United Nations, and the general public to become aware of that famine.

…why is it that we need to see children dying of hunger before we believe that it is happening?

Earlier this week, Associated Press published the first pictures of the starving in Tigray in the famine of 2021. The pictures are all from Mekelle, many from Ayder Referral Hospital in the city, where Tigrayan doctors and aid workers are trying to save the lives of severely malnourished children without outside help.

The pictures should shock the conscience of the world. They should compel humanitarians to ask why it has taken so long for us to see these realities, and to demand that we know what is happening in remote rural areas where conditions are worse. And they should compel us to ask, once again, why is it that we need to see children dying of hunger before we believe that it is happening? Are the last thirty years of professional study and institutional commitment to create early warning and monitoring systems for food security crises all for naught?

Over the last few years there have been numerous high-level commitments to preventing food crises, especially when related to conflict. United Nations Security Council resolution 2417 of April 2018 specifically, in paragraph 12

Ten months after the first warnings of conflict-related food insecurity were sounded, this has not happened. Doubtless, the UN Secretary General would argue that any effort on his part to fulfil that obligation would have run into opposition from countries such as China and Russia. Doubtless there is truth in that. But is the job of the leader of the UN to pre-emptively give way to every self-interested political objection that he might anticipate, or to provide moral leadership, reminding member states of their solemn commitments undertaken?

A few weeks before the conflict erupted on November 3-4, the World Food Programme received the Nobel Peace Prize “for its efforts to combat hunger, for its contribution to bettering conditions for peace in conflict-affected areas and for acting as a driving force in efforts to prevent the use of hunger as a weapon of war and conflict.” The WFP’s actions in Tigray since that date have not fulfilled the promise indicated that perhaps premature award.

In March this year the Secretary General himself established a High-Level Task Force on Preventing Famine. This followed a Call to Action to Prevent Famine the previous month by the UN’s Food and Agriculture Organisation and the WFP, which included an appeal to ensure the commitment of all food security actors to support and strengthen scenario planning, independent analysis, real-time monitoring and the use of early warning mechanisms to track changes and anticipate crisis, to ensure the scaled-up action and the advocacy required to prevent a deteriorating situation.

This was followed by the G7 famine prevention and humanitarian crises compact of May 2021 which included explicit calls for collecting the data necessary for improved action, but also “we will not let lack of data be a barrier to timely action to save lives.”

From November 2020 to June 2021, the data and maps provided by the UN Office for the Coordination of Humanitarian Affairs show a steadily deteriorating situation, culminating in the estimate of 400,000 people being in “category 5” of the Integrated food security Phase Classification (IPC) system. Category 5 is “catastrophe” or, when certain criteria for the threshold of populations in specific areas are met, “famine.” Having that number of people in that condition is a famine under anything except the most hair-splitting technical definition. But the UN food security diagnosis and response system demands technical precision.

Hence the Famine Review Committee, an independent but UN-activated and coordinated body and the analysts-of-last-resort when the politics of famine take over was convened. The FRC issued a report with four scenarios in May 2021 based upon an analysis done at the request of the IPC Global Support Unit, an FAO body. The scenarios cover a period from June until the end of September, with projections into a second period after that. We are now at the end of period 1. The worst-case scenario is number 4, identified as:

This is the scenario we are currently in, with the sole difference that humanitarian access within Tigray has become much easier. This progress is offset by the blockade that prevents aid getting into Tigray. The UN estimates that approximately 100 trucks of relief supplies are needed each day. In the last 90 days, 482 trucks have been permitted to travel, along with a limited supply of assistance by air. This total is less than 6 percent of assessed need.

According to the FRC, unless there is new data demonstrating otherwise, the risk of famine during July-September is “medium to high” rising to “high” for October onwards. Under the less pessimistic scenario 3, Tigray would still be at high risk of famine in the coming three months.

In any other emergency, a report such as this would set the alarm bells ringing and lead to not only intensified humanitarian action but also intensified information gathering so that the agencies knew what to supply, where and to whom. And indeed a whole page of recommendations in the FRC report is devoted to data gathering and analysis. Among other things, the FRC also called for weekly monitoring, regular analysis updates, and another IPC within assessment within three months. In short, the world’s leading food emergency experts said that Tigray needed especially close monitoring.

Meanwhile the FAO and WFP’s August-November 2021 “Hunger Hotspots Analysis” highlights Ethiopia as one of two countries (with Madagascar) at greatest famine risk globally. The report calls for: “Support a full food security and nutrition survey in all areas of Tigray, especially among IDPs.”

None of the promised UN action has happened. There are no new surveys, no data, no pictures.

Why have the United Nations and its specialized agencies not collected the data? On June 28, the Tigray Defense Forces defeated the Ethiopian army and expelled it from most of Tigray. This was followed by the withdrawal of the Eritrean Defense Forces. All of the major towns and roads, with the exception of western Tigray, came under the control of the TDF. Roadblocks vanished. The soldiers who had been obstructing access, stealing food, and killing, raping, and intimidating Tigrayan civilians ran away. A few days later, the UNOCHA update noted that most of Tigray had become accessible for humanitarians. To be precise, once a team had arrived in Mekelle it could travel freely and safely to the great majority of places and conduct activities, such as distributing assistance, conducting surveys and collecting information.

The UNOCHA humanitarian access map is unique. It shows no difficulty of access within Tigray, but also that the region is ringed by areas in which access is impeded or impossible. In short, the problem for the humanitarians was getting into Tigray in the first place. The Ethiopian government has systematically obstructed this access.

This prohibition of data and images keeps the starvation in Tigray away from the headlines, just as the Ethiopian government intends.

This week’s AP article contains information, known to every humanitarian worker and UN official in Ethiopia, but not hitherto made public:

“humanitarian workers boarding rare flights to the region have been given an unusual list of items they cannot bring: Dental flossers. Can openers. Multivitamins. Medicines, even personal ones. The list, obtained by the AP, also banned means of documenting the crisis, including hard drives and flash drives. Photos and video from Tigray have disappeared from social media since June as aid workers and others, facing intense searches by authorities, fear being caught with them on their devices.”

This prohibition of data and images keeps the starvation in Tigray away from the headlines, just as the Ethiopian government intends.

There has been no public protest from the UN about its inability to conduct the required information gathering.

Commonsense tells us that a region in which food supplies and other objects indispensable for the survival of the civilian population have been systematically destroyed, leaving 400,000 in “catastrophe” status and more than 5 million dependent on food aid, where no harvest can be gathered and neither commercial nor humanitarian food is allowed in, would be reduced to starvation. The FRC report puts that commonsense on an expert footing.

If the necessary data are not collected on a timely basis across the stricken communities, it is possible for localized famines to strike and then pass unnoticed—passing because the hungry people die and because the survivors move away before they can be enumerated. Which means that the data proving the famine lie in those graves.

Prime Minister Abiy Ahmed has insisted that there is no hunger in Tigray. His advisor, Deacon Daniel Kibret has said that future researchers studying the TPLF “shouldn’t find anything about them, except after digging the ground.”

Speaking at the G7 roundtable in the UK on June 10, U.S. Special Envoy Jeff Feltman warned, we “should not wait to count the graves” before declaring the crisis in Tigray what it is: a famine. That was a warning.

But the Ethiopian government strategy works: the UN appears to operate on the principle that what cannot be seen and cannot be counted can be ignored safely. Addis Ababa has successfully intimidated the UN from making the now-inevitable call that the situation in Tigray represents “famine”—a designation that will hang around the neck of the Ethiopian Government as a badge of eternal shame.

Unless the UN starts to reveal what it knows, then by its silence it is contributing to the death by starvation of tens of thousands of people, most of them children, in Tigray. It too will be eternally shamed.