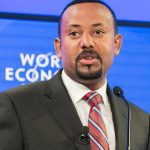 Feast and Famine in Ethiopia

Today, Ethiopia is a land marked by the starkest contrast: feast and famine.

In Addis Ababa, Prime Minister Abiy Ahmed is holding a lavish celebration to inaugurate his new government, on a scale not seen since the coronation of Emperor Haile Selassie almost one hundred years ago. There are vast crowds, parades, state banquets, and soaring speeches about Ethiopia’s proud independence.

In Tigray, children are starving to death in a man-made famine. Clinics and hospitals, stripped bare of even basic medicines, are filled with their faint, pitiful cries. The UN published some of its most disturbing statistics ever: almost four out of five pregnant or nursing mothers were acutely malnourished.

Heads of state and other international dignitaries arrived for the ceremonies at Addis Ababa’s Bole Airport over the weekend. If Abiy had his way, they would have passed by senior United Nations aid officials, on their way out. Seven humanitarian professionals were given 72 hours to leave on Thursday. The UN challenged the legality of the order so the deadline expired on Sunday with their position unclear. The official rationale for their expulsions is that they were “meddling in the internal affairs of the nation”, but it is no coincidence that the decision was announced just two days after the head of the UN Office for the Coordination of Humanitarian Affairs, Martin Griffiths, expressed his view that the famine “is man-made, [and] can be remedied by the act of government.” Three months ago, the UN-authorized Famine Review Committee assessed the evidence for food security in Tigray, and concluded that without a huge aid effort and an end to the fighting, massive famine was all-but-inevitable by the end of September. In June, about 400,000 people were in “famine-like conditions”—and that number was certain to grow. In the last three months, less than 10 percent of the aid supplies needed for Tigray have reached the region, feeding just 126,000 people. “The lack of food will mean that people will start to die,” Griffiths said.

The UN Secretary General, Antonio Guterres, said he was “shocked” by the expulsions. But  he should not have been surprised. Abiy has made clear his intent to starve Tigray into submission—or worse—for many months. It has also been clear that he is following Eritrean President Isaias Afewerki’s absolutist playbook, demanding that the UN be subservient or leave. It took willful optimism on Guterres’s part to continue to express any confidence that the Ethiopian leader would relent and allow aid convoys to move, if the UN continued to try gentle persuasion rather than public pressure.

Concern over armed conflict and food security was the rationale for United Nations Security Council resolution 2417, which among other things reaffirmed that “using starvation of civilians as a method of warfare may constitute a war crime.” But international norms have not deterred the Ethiopian government and its Eritrean ally from committing the widest range of starvation crimes: causing famine and blocking relief.

The slow and painful deaths children and their mothers does not appear to disturb Abiy. Rather, he claims to be leading his country to fulfil its historical destiny of greatness. Abiy also claims an electoral mandate based on winning 95 percent of the seats in last May’s election—a margin of victory that trumpets its hollowness.

Abiy is hoping that the display of popular enthusiasm for his leadership will persuade his visitors—and the world—that he indeed has the mandate to rule a reborn Ethiopia and remold it according to his vision.

Ethiopian rulers have a history of putting on carnivals while their people starve.

In 1973, while the Emperor Haile Selassie celebrated his eightieth birthday with an opulent party, peasants were dying of hunger in Wollo province. The imperial feudal system contributed to the famine and the Lion of Judah, King of Kings, Elect of God, refused to acknowledge it—though he tried to shift the blame to his subordinates for covering it up. Haile Selassie paid the price: the legitimacy of the Solomonic Dynasty wasted away and was overthrown the following year.

In 1984, the military regime of Colonel Mengistu Haile Mariam covered up the famine raging in Wollo and Tigray so as not to spoil the tenth anniversary celebrations of the revolution, which included a military parade in Revolution Square of newly-acquired Soviet weaponry. Mengistu’s government notoriously stated that “food is a major weapon” against insurgents in Tigray and Eritrea and restricted and manipulated humanitarian aid. Its efforts to deny aid to the famished directly led to a massive cross-border relief operation into the rebel-held areas. Mengistu decried that operation as a violation of Ethiopian sovereignty, but it came about precisely because of his own abuses that discredited the notion of untrammeled sovereignty, in favor of “sovereignty as responsibility” and the subsequent doctrine of the responsibility to protect.

Abiy’s sumptuous replica coronation cannot bring him the legitimacy he craves. Only stopping the war, ending the atrocities, freeing the opposition and feeding the hungry can deliver him that. If Abiy continues to spend his country’s scarce resources on fighting a war, it is not only Tigray that will face food crisis: scarcities will mount throughout the country, and hunger will even visit the capital Addis Ababa. This will be the sovereignty of the famished, jingoism with an empty stomach.

The link between war and hunger runs both ways. This was one of the fears expressed by the UN Security Council when it adopted resolution 2417 in May 2018: “Recognising the need to break the vicious cycle between armed conflict and food insecurity.”

As Ethiopia slides deeper into food insecurity it will become a more unstable and dangerous country. Humanitarian failure is already escalating the war in a direct fashion. The Tigrayan Defense Forces have taken the offensive, sending units beyond the boundaries of their region, saying they are determined to break the starvation siege by any means necessary. If the international community doesn’t bring aid to end famine in Tigray, Ethiopia and the whole Horn of Africa will face a widening war.

Guterres has protested the expulsions of his staff and demanded that Ethiopia allow them to continue their activities. He has pointed out that the formula of “persona non grata” does not apply to the UN and has asked for evidence for their alleged transgressions. But the Secretary General didn’t get the backing of the UN Security Council, which could not agree even on a timid statement at its meeting on Friday. Most likely, leaders didn’t want to spoil Abiy’s party or have their envoys feel awkward at the banquets tonight.

Such acceptance of Ethiopia’s fig-leaf of national sovereignty is not only morally wrong but politically dangerous too. The hunger plan of Abiy and Isaias doesn’t strengthen Ethiopia’s sovereignty or legitimize its ruler. On the contrary, while hunger kills Ethiopians, a monumental famine will likely kill Ethiopia.