What now for the Somali Region in Ethiopia? Don’t Be Afraid to Stand Against Genocide 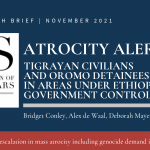 This alert was published by the International Association of Genocide Scholars (IAGS). The views expressed herein are the authors’ alone and do not represent the views of IAGS as an organization.

The war between the Ethiopian government, its allied militias, and the Eritrean military against Tigrayan armed forces is now entering a new, extremely dangerous phase that presents a high risk of mass atrocity. As Tigrayan forces approach Ethiopia’s capital city of Addis Ababa, the Ethiopian government has begun taking action that raises alarms about potential mass atrocities in and around the city. Specifically, the Ethiopian government has escalated hate speech against Tigrayans, mobilized neighborhood militias to fight the war, and arbitrarily arrested at least 30,000 Tigrayan civilians in Addis Ababa. These civilians—in addition to Tigrayan soldiers held in detention centers since the war began in November 2020, imprisoned Oromo political leaders, and Oromo civilians who refuse to join militias —are all at heightened risk of atrocities. Additionally, there are reports of ongoing massacres of Tigrayans who live in Western Tigray, which is still under government control. We call for the United Nations, the African Union, and all states that are parties to the 1948 Convention on the Prevention and Punishment of the Crime of Genocide to fulfill their obligation to act now by:

The risk of a major escalation in ethnically targeted mass atrocities in Ethiopia is extremely high. This is due to developments in the current armed conflict that present the serious likelihood of defeat for the government of Prime Minister Abiy Ahmed. Research across numerous cases has found that threats to a government, including but not limited to battlefield losses, is a common trigger for mass atrocities. This possible trigger, as well as the presence of other risk factors of atrocity crimes, suggests that at least tens of thousands of civilians are at risk. On November 4, 2020, at a time of escalating tension and reciprocal threats, Tigrayan forces attacked Ethiopian military bases. The government of Ethiopia responded by launching a military offensive in alliance with neighboring Eritrea and militia groups recruited amongst ethnic Amhara. Serious human rights abuses have been committed by all sides over the past year of this armed conflict, but there is a clear and overwhelming difference in the scale and the systematic nature of abuses perpetrated by government-aligned forces against Tigrayan civilians. Specifically, government-aligned forces have perpetrated rape, massacre, forced displacement, and wanton destruction across the areas the Ethiopian government has controlled. Since the conflict began and with increasing animus, Prime Minister Abiy Ahmed and his allies have used their control over national media and a network of vocal advocates on social media to broadcast hate speech, including highly-charged negative ethnic stereotyping referring to the Tigrayan rebels as “daylight hyenas,” “cancer,” “weeds” to be uprooted, and “rats.”

Today, the Ethiopian military is facing defeat by Tigrayan forces and allied Oromo armed groups. International envoys are attempting last-ditch efforts to secure a ceasefire but with little realistic chance of success. As Tigrayan and Oromo forces approach the capital, the Prime Minister and his allies are escalating hate speech, portraying the war as an existential crisis. Prime Minister Abiy himself has left Addis Ababa for the frontline to direct the fighting himself, saying “We would rather die to save Ethiopia than outlive Ethiopia.” The government is also mobilizing and arming the general citizenry, empowering them to use violence. Independent voices, including those calling for peace, have been silenced by official diktat.

In the remaining areas it controls, the government has recently undertaken several actions that give credence to an extremely serious risk of mass atrocities for several segments of the Ethiopian population. These groups include the following: Tigrayan civilians arrested by the government in recent weeks; former Tigrayan soldiers in detention centers under government control; imprisoned Oromo political leaders; Oromo civilians who refuse to join militias; and Tigrayans in Western Tigray that has been annexed to Amhara region, which is controlled by Amhara militias and Eritrean army forces. Eritrean army forces.

In Addis Ababa and other major towns, government authorities have interned more than 30,000 Tigrayan civilians. Widespread arrests escalated in November. The Tigrayan civilians are kept in overcrowded, unsanitary, makeshift detention centers, each of which holds an estimated 300 to 3,000 people. Among the detention sites that have been corroborated by multiple sources are: emptied stores, manufacturing buildings, schools, and local-level police stations. Detained people are being fed primarily only when their families can deliver food to them.

Additionally, the government holds at least 15,000 former soldiers of Tigrayan ethnicity in detention centers around the country. Most of this group were detained a year ago, when the war began, and they remain at risk today.

The Ethiopian government has also targeted Oromo leaders and civilians. This crackdown began before the war when Oromo groups protested the killing of a popular singer and Prime Minister Abiy’s abandonment of the democratic movement that had helped sweep him to power in 2018. These arrests are now escalating. The government holds scores of political prisoners who are ethnic Oromos, including the leaders of the democracy movement, in Kality Prison in Addis Ababa. The administration of the prison is reportedly being transferred to the intelligence services. Reports are also emerging from rural areas of the government detaining and torturing Oromo civilians who refuse to fight on its side.

Mass atrocities may be underway already in Western Tigray, notably in the towns of Humera and Adebay—the latest round in a recurrent pattern witnessed over the last year. Eyewitnesses who have fled to neighboring Sudan have reported that Tigrayans are being rounded up for deportation, internment, and death in these towns. Over the last three weeks, there have been reliable reports of more than 700 killings and more than 40,000 people being held in internment camps, where men have been separated from women and children.

The Tigrayan Defense Forces and Oromo Liberation Army are also responsible for significant violations of international humanitarian law, with every alleged atrocity vividly reported on state media to amplify fears. The spokesman for the Tigray People’s Liberation Front repeatedly uses language that further inflames deeply-held fears among non-Tigrayans that his party intends to rule the country with arrogant contempt for its adversaries.

Taken together, these factors present compelling evidence that mass atrocities, and possibly genocide, are ongoing or are at extreme risk of occuring.

A lack of access to the war zones and detention centers and other locations in which violations may be taking place is currently preventing a more conclusive assessment of events, but the available information is deeply alarming. The violence is occurring in the context of an escalating civil war which the government presents as an existential threat. The authorities are aggressively arming militia and vigilante groups. Official media is escalating hate speech and has stopped all independent reporting. What is more, the government has increased detentions, torture, massacres, and other violence against groups that are clearly being targeted along ethnic lines.

International attention is currently dominated by efforts to evacuate non-Ethiopians from the capital. We cannot forget the most vulnerable Ethiopian civilians during this crisis moment. We urge the Secretary General of the United Nations, the Chairperson of the African Union Commission, and leaders of all states parties to the Genocide Convention to speak out clearly, in unity, and with utmost urgency to demand that the political and military leadership of Ethiopia live up to its obligations to protect all civilians under its control from crimes against humanity, genocide, and war crimes. Ethiopia was the first state to ratify the Genocide Convention in July 1949, and it bears a unique responsibility to fufill its obligation to prevent and punish the crime of genocide.