Don’t Be Afraid to Stand Against Genocide Ending solitary isolation in Massachusetts? 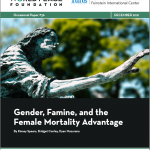 We are pleased to announce a new occasional paper, published jointly with the Feinstein International Center, “Gender, Famine and Mortality,” by Kinsey Spears, Bridget Conley, and Dyan Mazurana.

During times of famine, sex, gender and age differences matter. These factors impact who dies, who lives, and how people suffer; they shape lives and livelihoods before, during and after crises. But precisely how and why these factors intersect with famine conditions is an issue of much debate. This Occasional Paper investigates the evidence and explanations for sex, gender and age differences across 25 famines.

Globally, across their lifespan, women and girls experience hunger—chronically and endemically — more than men and boys. Multiple factors shape this reality: laws and practices that discriminate against females, patriarchal norms that value males over females, lower pay for female labor, fewer property rights for females, biological factors that increase the impacts of hunger (e.g., menstruation, pregnancy, childbirth and lactation), and females’ reduced access to educational, financial, political and social resources. This paper explores how and why famine intersects with these gendered disadvantages and advantages.

It analyzes the cause of death, biological factors, health outcomes for famine survivors, in situ coping strategies, and migration patterns. Additionally, the authors address the gendered nature of coping strategies exposes men, women, boys, and girls to serious, and at times different, risks and harms. They document and analyze the potential long-term gender and age health and socio-cultural risks associated with exposure to mass starvation. The paper concludes by addressing these issues and their implications for protection and accountability.

Overview of the Paper

Introduction to Sex, Gender and Famine: The impact of gender and age on famine, however, remains understudied. An important gendered finding is that many cases reveal a female mortality advantage (FMA) during famine. Kate Macintyre surveyed the existing literature on famine. Relevant to this topic she found that while gender analyses are infrequently applied to demographic analyses, in most cases there is FMA. We revisited Macintyre’s article to determine what we know, and what we still need to know, about sex, gender, age and famine mortality.

Sex Gender Age and Surviving Famine: The gravity of famine is often measured by its mortality rate. Yet the enormity of the negative physical and mental health, social, educational and economic costs of famine on survivors, their children and grandchildren make clear that a focus on mortality alone misrepresents the true toll of famine. Indeed, the effects of surviving famine last well beyond the famine’s end and vary for different ages, sexes and genders. We analyze long-term health effects.

Towards Greater Gender Awareness in Protection and Accountability: We draw seven conclusions from our analysis of the existing data on sex, gender, age and famine.