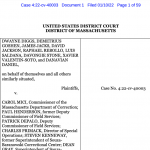 On January 10, 2022, the Boston Globe published a story on its homepage: “Federal lawsuit accuses state officials of retaliatory violence.” It drew on stunning evidence from a newly filed Federal case against the Massachusetts Department of Correction (DOC). The case argues that in early 2020, prison officials responded to an attack against several guards at Souza Baranowski Correctional Center (SBCC) in Shirley, MA, by perpetrating a campaign of violence against incarcerated men and which especially targeted African-American and Hispanic men.

The allegations include systematic physical and psychological abuse against incarcerated people who were not involved in the initial assault. Retaliatory attacks began, the plaintiffs state, immediately in the wake of the attack against guards on January 10, 2020 and the last incident occurred on February 6, 2020. The DOC claims that they had evidence that there were additional assaults being planned, but this has not been made public and would not, in any case, justify the brutal violations of incarcerated peoples’ human rights, and the abandonment of their own policies governing actions against incarcerated people. Several incarcerated men were hospitalized as a result of the violence, which appeared to have been authorized at the highest levels of the prison administration and the DOC.

Within hours, the story about the new case faded from the newspaper’s homepage – public interest, measured in clicks, was apparently elsewhere.

The Globe story was far from the first time that the campaign had reached public notice. In 2020, the DOC released video of the initial attack against the guards the same day it happened, and MassLive posted it on YouTube.

Several actions and media coverage then focused on how the prison denied incarcerated men access to their attorneys. State Representatives Jamie Eldridge and Lindsay Sabadosa were among five elected leaders who visited the prison in early February to follow up on allegations of abuses and to protest restrictions on attorney access that lasted for approximately 17 days. At the time, their visit garnered some media attention. Several lawyers also filed a legal case protesting the denial of access. Called to testify in the case, SBCC Superintendent at the time, Steven Kenneway, defended the prison staff and referred to 23 men at the prison as “enemy combatants” – indicating a desire to apply the blurry code of conduct and laws governing suspects in the war on terror to incarcerated citizens of Massachusetts. Kenneway, it is worth noting, was also a commander of the intelligence unit that worked in Abu Ghraib prison in Iraq during the period when rampant abuse and torture of Iraqi prisoners took place.[i] After two days of hearings, on February 28, 2020, Judge Cannone ruled in favor of the plaintiffs, stating, “the restrictions…represent an exaggerated response…” (24).

Denial of access to attorneys was just the tip of the iceberg; even more stunning was the abuse underway at SBCC while attorneys were denied access to their clients. But, in March 2020, all headlines turned to the one story that would dominate life: the COVID pandemic.

It took months before the continuing fall-out from the violence at SBCC would again gain notice. Among the new outlets for this story was this blog. On October 13, 2020, we published an interview with Massachusetts-based defense attorney Patty DeJuneas about abuses that one of her clients suffered during a two-week period in January 2020 and subsequent retaliation against him when he attempted to pursue a grievance for this treatment. A year later, the Boston Globe Spotlight Team published an in-depth article, “The Taking of Cell 15,” about the violent campaign at SBCC.

But none of these stories matches the depth of detail found in the Class Action Complaint filed in Federal Court on January 10, 2022. The case was filed on behalf of a group of incarcerated African-American and Latinx men, aged 24 to 57: Dwayne Diggs, Demetrius Goshen, James Jacks, David Jackson, Raphael Rebollo, Luis Saldana, Davongie Stone, Xavier Valentin-Soto, and Danavian Daniel by a team of lawyers from Prisoners Legal Services and the law firm Hogan Lovells US, LLP. While these men are named as plaintiffs – a brave act considering the key issue is how DOC retaliates against people under its control – the suit describes a pattern of human rights abuses that impacted more than 100 men.

The allegations of violence are appalling:

“…extreme, malicious, and cruel methods of force designed not to restore order, but to inflict pain, fear, and trauma. This unconstitutional brutality included beating and kicking prisoners; gouging eyes, grabbing testicles; smashing faces into the ground or wall; deploying Taser guns, pepper ball guns, and other chemical agents; ordering K9s to menace and bite prisoners; and excessively tightening handcuffs and forcing prisoners’ arms into unnatural and painful positions, among other positional torture tactics.”

Officers targeted Black and Latinx prisoners for especially brutal and degrading treatment, such as yanking and ripping out dreadlocks and braids and shouting racist comments and slurs as the officers assaulted them. Some officers wore a white supremacist logo on their helmets.

Officers subjected prisoners to other dehumanizing, humiliating, and punitive actions, including being strip searched in view of numerous other prisoners and staff; being led barefoot through toilet water and human waste; having personal property destroyed; and being denied medical and mental health care”

Many of the men were brutally extracted from their cells. Dogs were used to terrify men: injuries included puncture wounds and torn flesh (Para. 72). Chemical agents, including tear gas, were launched into tiny cells (Para. 71). Then men were brought to a hallway on the second floor, where they were forced, hands cuffed behind their backs and shackles on their ankles to kneels in a stress position for several hours. If they tried to shift their weight back unto their feet, rest their head on the wall to relieve some of the pressure, or turn their head to look down the hall, officers responded with violence: “officers smashed their heads against the wall, applied a pain compliance hold, yanked them up by the wrist restraints behind their backs, or took them to a different area to be beaten” (Para. 66). Officers threatened men if they moved that the dogs would bite them or they would be shot: “The officers said they could do whatever they wanted because the cameras had been turned off and there were ‘no more rules’” (Para. 66).

The DOC and prison leadership knew of and approved the actions, which continued over days and weeks – at times becoming direct witnesses to it. Throughout and ignoring established protocols, the officers systematically failed to video record their actions (Para. 79).

The plaintiffs describe sadistic and traumatizing assaults. Each one has a terrifying story to tell.

Below, I provide excerpts from the allegations of abuse against one man, Dwayne Diggs. He was stripped naked, cuffed in excessively tight restraints such that he lost feeling in his hands, had all of his meager belongings confiscated and destroyed, and was forced to stand in a corner of the gym for an hour at gunpoint. Then he was returned to his cell.  That was when another assault occurred:

“The officers handcuffed Mr. Diggs behind his back and held a pepper ball gun to his head. While Mr. Diggs was on his knees, restrained and defenseless in his cell, at least three officers punched and kicked him repeatedly. Throughout the day, Defendant Birri and other officers in this tactical team used degrading language and racial slurs against Mr. Diggs, calling him “c**t” and “n****r” repeatedly. The tactical team again took Mr. Diggs, clad only in his underclothes, out of his cell.

This time, they paraded him past Defendants Kenneway [Superintendent of SBCC at the time] and Mici [Carol Mici, Commissioner of the DOC] who stood in a nearby entryway. While Mr. Diggs yelled to Defendant Kenneway, the tactical team responded by slamming Mr. Diggs against the wall.”

Neither Kenneway nor Mici expressed disapproval, let alone took action to stop the violence. And in the days and weeks following the assaults, the plaintiffs argue, there was a concerted conspiracy to cover-up evidence (Paras. 155 – 159).

The plaintiffs and their legal team charge several serious crimes: cruel and unusual punishment (violation of the 8th Amendment), conspiracy to commit the violations, failure to intervene, violation of equal protection (14th Amendment) for the racist nature of the targeting, and the intentional infliction of emotional distress.

The Massachusetts public, one would think, does not condone torture. Yet, when its prisons are places where acts of violence, humiliation and domination appear to be sanctioned by the highest authorities, the public seems not to mind much. It does not seem to care that less than 50 miles from the “city on the hill” is a closed “town” of some 700 people who, apparently, can be tortured by state officials without consequence.

Authoritarianism is not always an entire governance structure, sometimes it is a semi-hidden, micro-system to which the larger public is willing to turn a blind eye. Always, it is characterized by one set of people having absolute authority to do as they please to another set of people. Where I live, we call this place “prison” and Souza-Baranowski Correctional Center is its most atrocious example. Perhaps public interest will be aroused as the case moves forward – for now, though, the shocking allegations seem to have passed by largely in silence.

[i] Abu Ghraib prison was under the overall command of Brigadier General Janis Karpinski during the period of the torture scandal. The majority of those charged with perpetrating abuses were enlisted soldiers from the 372nd Military Police Company. At one point in the investigation of abuses expanded from the military police units to the 325th Military Intelligence Battalion headquartered in East Windsor, CT. The Battalion included two companies, Bravo Company, based in Waterbury, CT, and Alpha Company, based in Ft. Devens, MA. Capt. Stephen Kenneway was commander of the Ft. Devens unit. He toured the prison at the time and claimed to have seen “nothing but professional interrogations.” Nonetheless, two men from the 325th Battalion admitted to participating in the torture: Former Spc. Roman Krol and Spc. Armin Cruz. And as part of testimony taken for the Fay Report, at least one solider from the 325th Battalion reported evidence of torture, seeing prisoners naked and beaten, and noted that training was inadequate. A third soldier from the 325th unit, Israel Rivera, also admitted to witnessing abuses, however, he was not charged and later testified against others. Later efforts connected abuses to interrogators who were contractors, employed by CACI International, and translators provided by the Titan Corporation.