We Need to Talk about World Peace Who arms War? 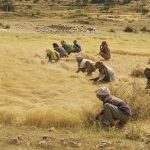 In 1971, UNHCR published a poster with the banner, “Einstein was a refugee.” It wanted to remind Europeans and Americans that refugees brought more than “a bundle of belongings” to their new country. It also drew attention to what was lost when a government turned against its own people: priceless knowledge could be destroyed forever, accomplished people driven from their country and denied the chance to utilize their talents for the public good. So too in Tigray today. While the (minimal) news coverage understandably focuses on the immediate human toll and the frightening prospects of intensified war, famine and state collapse, there are other less visible, but no less irreparable harms inflicted. This blog post is a paper by leading Tigrayan agricultural scientists, documenting how decades of priceless research have been wantonly destroyed. As an educational foundation dedicated to world peace, we publish it to draw academic attention to a neglected kind of starvation crime, and to appeal for support for Tigrayan scientists and scholars.

Economic and social development crucially depends on technological advancement.[1] Technological progress is an important factor to improve productivity and achieve efficiency in the production and exchange of goods and services. The role of technological progress is even more crucial in the development and transformation of the agriculture sector in developing countries where productivity is very low, poverty is widespread and food insecurity is rampant. Compared with other sectors, growth in the agricultural sector has a higher effect in reducing poverty and improving food security, essentially because poverty is primarily a rural phenomenon in these countries.[2]

Agriculture research is the major source of new and improved agricultural technologies and practices. Agricultural research is also one of the major sources of policy, organizational and institutional recommendations to improve the performance of the sector.[3] A widely accepted objective for agricultural development in Africa is to achieve sustainable intensification with the adoption of new technologies that use improved inputs (such as improved seeds and inorganic fertilizers) to increase land and labor productivity.[4]

To support the regional conservation-based agricultural development policy, the Tigray region established the Tigray Agricultural Research Institute (TARI) in 1999 to help in the generation and promotion of new and improved agricultural technologies and practices to develop the agriculture sector. However, TARI has been one of the victims of the genocidal war waged by the Ethiopian government on Tigray. As part of the strategy of starving Tigray into submission, the Ethiopian government, in collaboration with its allies, did all it could to destroy the agriculture and food system of the region, in which TARI has become one major victim. A team of TARI researchers conducted a regional survey to assess and document the nature, extent, and value of the damage on the organizational, infrastructural and research activities of TARI. This article presents a summary of the findings of this study.

No Mercy Even for a Research Institute

Starvation crimes are usually characterized by their deliberate destruction of the agriculture and food system of a given society.[5] Consistent with this general truth, the genocidal trio of the Ethiopian National Defense Forces (ENDF), the Eritrean Defense Forces (EDF) and the Amhara regional forces, during their occupation of the Tigray region, had unleashed institutional and infrastructural destructions on TARI. These forces inflicted significant damage on the headquarters of TARI, its research centers, and research stations and experimental sites. Research scientists and their support staff were killed in the process. The damage assessment study has revealed that an estimated total of US$ 75.5 million worth of damage has been sustained by TARI. Offices, genetic resources conservation sites, laboratories and field equipment, vehicles and farm machinery, IT equipment and data storage centers, residential buildings, animal barns, apiary sites and research experiments were targeted for destruction, looting and pillaging.  All research programs, projects, and experiments, including 39 PhD theses research projects, and 48 MSs theses works have been destroyed or suspended. Research data that were accumulated over the more than two decades of research activities have been lost. Invaluable crop genetic resources, which are beyond monetary value, that were stored for conservation are lost.  This damage came at a time when TARI had started to make significant contributions to the development of agriculture in Tigray. Below we briefly show the development of TARI and its contributions.

The Birth and success of TARI

Organized agricultural research in Tigray sponsored by a Tigray-based research body started in 1972 when the Mekelle Research Center (MRC) was established as part of the then Ethiopian Institute of Agricultural Research (IAR). A UN-FAO mission team, which was sent to assess the drought of 1972, recommended the establishment of MRC, clearly demonstrating the long-term vision of the team for a fundamental solution to the recurrent food shortage problem in the region. Initially MRC was mandated to focus on dryland crop variety development, but later its mandate was expanded to include research on natural resource management to attend to the severe land degradation widely prevalent in the region. The center was initially supported by an FAO multidisciplinary team of experts.

The Damages by the Trio

At the headquarters of TARI in Mekelle, which also hosts the Mekelle Research Center and the Honeybee Research Center, laboratory equipment, animal barns and sheds, apiary sites, poultry farms, greenhouses, metrological stations, dip and pivot irrigation systems were deliberately and completely destroyed. The headquarters building sustained significant damage and required massive repairs to make it functional. The Humera research center was completely destroyed and looted. Similarly, the Humera Begait Animal research center was completely destroyed and looted, including the several hundred of selected Begait cattle, sheep and goats which were kept for genetic improvement research purposes. The Abergele Research Center, which focused more on livestock research, had its barns, laboratories, integrated poultry-fish research experimental sites near the Tekeze river, were completely destroyed and looted. The Axum, Shire-Maitsebri research centers lost all their research facilities, including barns, poultry farms, apiary sites, and laboratories. The damage on research infrastructure is roughly estimated at more than US$D 42 million.

Vehicles and farm machinery were perhaps easier targets because they could easily be driven away or transported for use in other places. TARI lost 17 field vehicles (more than half of what it had), a bus, seven motorbikes, twenty tractors with their full accessories, two pivot irrigation generators, three large electric generators, and seven large size water pump generators. The damage and loss of vehicles, machinery and accessories is valued at more than US$ 7.5 million.

Biodiversity conservation research arboretums at Humera, Mai-Tsebri and Abergele centers were completely destroyed. Several planned and ongoing research projects of the Socioeconomics and Extension Research directorate, and the Agricultural Mechanization and Rural Energy Research directorate had to be terminated or suspended. While it is impossible to value the loss of genetic resources accurately, the loss due to the destruction of research sites and suspension of the research activities is estimated at about US$ 7.5 million.

In addition to the various damages that have been valued, there are many other kinds of losses that have been sustained, which do not easily lend themselves to valuation. The suspension and termination of research activities is a case in point. The morale of research scientists and support staff is another. Although the resilience of the people of Tigray lays a solid foundation to make up for the loses sustained by TARI, it definitely will take time to put TARI back om its feet.

The deliberate damage by the trio on the research infrastructure, facilities and research activities of TARI means its research activities will be affected for years to come, and its contributions to the development of the region’s agriculture compromised. The technology generation effort of the institute will be halted or, at the minimum, delayed by several years. Significant investment funds will be needed to rehabilitate the headquarters and the research centers. Laboratories will need to be re-equipped, refurbished, and rehabilitated. Research sites will need to be reorganized. Efforts to conserve genetic resources will have to start anew. The human capacity development efforts of research staff will need to re-ignited. The stolen institute vehicles and machinery will need to be replaced by new ones.

[3] Pardey, P.G. and J.M Alston. 2014. “Investments in and the Economic Returns to Agricultural and Food R&D Worldwide.” Encyclopedia of Agriculture and Food Systems, 2014