In Russia as in Israel, buying weapons is just as harmful as selling them Weaponized storytelling à la française: Demystifying France’s narratives around its arms export policies 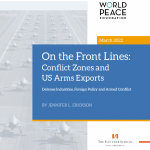 On the Front Lines: Conflict Zones and US Arms Exports

The US export control system was tasked in the 1970s with restraining arms supplies to regions of conflict and instability, while also accounting for US economic interests and national security needs. Today, the United States continues to be the largest arms supplier in the world, with a global customer base. What has been less clear – and increasingly the topic of political debate – is whether its export control system meaningfully restrains arms supplies to conflict zones.

The first section of this report examines US domestic arms export law and policy. The centerpiece of the US arms export control system is the 1976 Arms Export Control Act (AECA), which gives the president authority over arms exports and imports. The AECA directs export decisions to take the outbreak or escalation of conflict into account. However, conflict does not trigger an obligation of license denial. The AECA also positions Congress as a check on executive decision-making. In practice, Congressional oversight has been weak to non-existent. The executive branch can therefore shape arms transfers around its current policy priorities.

The second section provides an overview of US international obligations. While the United States is legally bound to implement mandatory United Nations arms embargoes and to act in a manner consistent with international law, it faces relatively few arms-export specific multilateral obligations. US presidential administrations therefore have considerable legal authority over their conventional arms export decision-making, as well as considerable flexibility in their interpretation of US and international arms export rules and whether they choose to privilege arms export promotion or restraint in the face of conflict.

Finally, this report examines US arms supply and restraint to recent and contemporary conflicts in Libya, Nigeria, South Sudan, Syria, and Yemen. It identifies different political and economic patterns in supplies to state and non-state actors. US arms trade relationships with other governments can be long-standing and often perceived as strategically valuable. Conflict does little to alter existing intergovernmental arms trade relationships, even when recipients’ policies and practices do not serve US interests. In contrast, there is unlikely to be an established pre-conflict arms trade between supplier states and armed rebel groups. Instead, the United States may initiate or facilitate arms supplies – small arms especially – as a form of political and military support during conflict. This occurs despite the risk that small arms are frequently diverted to illicit markets or to groups opposed to the United States.

US export rules should be revised to require substantive risk analyses and an explicit presumption of denial in cases of recipients’ engagement in genocide, war crimes, and crimes against humanity. At present, the rules merely “consider” recipient conflict and instability. However, presidential administrations and Congress will face more pressure to make careful and responsible arms export decisions with regard to conflict zones when US export rules articulate more meaningful constraints.