On the Front Lines: Conflict Zones and US Arms Exports Reflections on French arms trade to conflict: an interview with Emma Soubrier 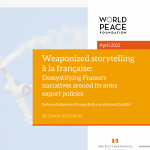 The World Peace Foundation is pleased to announce the publication of “Weaponized storytelling à la française: Demystifying France’s narratives around its arms export policies” by Emma Soubrier (April 1, 2022). This is the fourth report from or program, “Defense industries, Foreign Policy and Armed Conflict,” sponsored in part by the Carnegie Corporation of New York. Access the Full report, Executive Summary (text below) and an Introductory video in French or English.

From the Executive Summary:

Globally, the number of armed conflicts has steadily increased since 2011, many of them in the Middle East and involving some of the world’s largest arms importers, such as Saudi Arabia and the UAE. This multiplication of conflicts exposes the inconsistencies in the arms export control regimes of the world’s largest arms exporters, including France. Exploring five conflict case studies (Russia/Ukraine 2014-2015, Libya, Syria, Yemen, Philippines), this report highlights discrepancies between France’s narrative about its arms export controls and its export practices.

France advertises that its arms exports are done with absolute respect for its international commitments and considerations for conflict situations. It notably applies the European Union (EU) Council Common Position that instructs that Member States shall deny an export license if this would provoke or prolong intrastate or interstate armed conflict (criteria 3 and 4). However, the report shows that France has exported weapons to conflict parties on numerous occasions – and that the disconnect between the French narrative and its arms export policy does not stop there.

Through the five conflict case studies, the report explores other arguments that make up this storytelling à la française. Two of its pillars are the idea that French export control processes are already “strict, transparent and responsible” enough as they are, and the proposition that weapons sales are an intrinsically essential support to the country’s strategic autonomy and foreign policy interests. This latter priority include the crucial need to be a reliable long-term supplier and to sustain strategic partnerships often associated with such arms trade.

The report posits that these arguments have been at best incomplete, and at worst erroneous. Furthermore, they preclude any fruitful conversation on how to course correct. Demystifying them and conducting a sober assessment of their validity is critical because the evolving dynamics of armed conflict around the world heighten the need for genuine accountability in the global arms trade. Crucially, if left unchecked, these dynamics also precisely undermine France’s strategic autonomy and its foreign policy interests, notably because of the growing reverse influence of client states and the long-term destabilization linked to arms (re)transfers to non-state actors.

Drawing on documentary sources and interviews, the report lays the groundwork for a renewed debate around arms sales in France. It aims to generate discussions about how the export control regime could be revised to align with strategic goals associated with manufacturing and exporting weapons, without jeopardizing compliance with international commitments and the upholding of international security.

Learn more about the report and the research program, Defense industries, Foreign Policy and Armed Conflict,” on our website.