Reflections on French arms trade to conflict: an interview with Emma Soubrier Testifying at the ICC 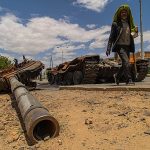 A Quarrel in a Faraway Country

The invading army insisted on referring to the war as a “special military operation” to “liberate” the people from their elected leaders. When asked for humanitarian corridors, it offered routes leading to areas under its control while actively disrupting alternatives.

Numbers favor the invading army—armed personnel, weapons stockpiles and geographic size. But victory did not come “within days” as it had proclaimed. Forty-eight days into the war Ukraine’s capital did not fall under the invading army. Yet the war leader tells his people that the operation is on course and nothing is going awry. Official media faithfully follow his line: others are forced to close.

The same script applies to the story of the Tigray war – taking place four thousand kilometers away in Africa – launched by Ethiopian and Eritrean armies in November 2020.

But the war in Ukraine and Tigrai are not the same

There are of course many differences between the two wars. Western powers exposed Russian mobilization and the complicity of neighboring Belarus ahead of time by releasing satellite images and declassifying intelligence analyses. To the contrary, the US was silent about Ethiopian and Eritrean joint preparations and troop deployments ahead of the Tigray war, which is now a public knowledge. In fact, two weeks into the war, the Assistant Secretary for African Affairs, Tibory Nagy, in a press conference downplayed the humanitarian disaster from the war and denied the presence of the Eritreans. It was only at the end of December Reuters reported about the presence of Eritrean forces in the war citing anonymous western diplomats.

The Ukrainian defense line has been reinforced with weapons from NATO countries and they are armed with Turkish Byraktar TB2 drones, which are supremely effective against tanks and other vehicles. By contrast, it is Ethiopia that has been shopping for these weapons from any country that will sell, including those same drones from Turkey, the UAE, Iran and China which have rained fire on Tigraian cities and defense lines. Outgunned, the Tigraians decided to withdraw from their cities to spare them from complete destruction.

The starkest difference between the two wars, however, in the reaction of the international community.

For fifty days without fail, the Russian war against Ukraine has been the top news story of major international outlets. Every media house runs multiple accounts of the war, the resistance, the atrocities, the humanitarian crisis, and the stories of victims and survivors.

The last international journalist permitted into Tigray to file a report was in June last year. For more than nine months Tigray has been under a total media blackout.

But enough is known. Multiple video footages of Ethiopian soldiers executing Tigraian civilians have been verified and disseminated by international media outlets. International journalists have refuted claims by the Ethiopian government that pictures of child victims of bombing raids are “actors”. It has been a year since an internal report of the State Department describing the situation in Western Tigrai as “an apparent campaign to force out the ethnic Tigraian population under the cover of war” had been reported by the a report of the US government. Just last week Amnesty International and Human Rights Watch documented that this has not stopped, and predictably the regime’s apologists have said it is fake news.

Within a week of Russian forces crossing the Ukrainian border, the UN Security Council (UNSC) met three times, while the UN General Assembly held a rare urgent session, to discuss the Ukraine war. The UN Human Rights Council convened to deliberate on possible rights violations of the days-old conflict. The body then expelled Russia from membership of the Council. The Internal Court of Justice (ICJ) was asked to review the matter. The Prosecutor of the International Criminal Court (ICC) launched investigation. The Secretary General of UN was swift expressing outrage about civilian safety.

The UN has been telling the Tigraians that the UNSC was impeded by procedural difficulties or the objections of Russia and China from putting Tigrai on a formal agenda. The ICJ and ICC have said and done nothing while millions of Tigraians were denied humanitarian assistance and access to basic services for almost two years. Eritrea remains a member of the UN Human Rights Council—a doublethink for which no words can do justice.

Tigrai could have been put on the agenda of the UNSC by the UN Secretary General. In fact he is obliged to swiftly inform the Council about a war that entails widespread food insecurity under resolution 2417 on armed conflict and hunger. Putting the Tigrai war on the agenda, accompanied by a draft resolution—or even a presidential statement—would have had forced member states take a public position on the matter. Ireland, which is a non-permanent member for 2021-22, repeatedly tried to do this. Nonetheless, neither the UN nor the “P3” of the U.S., Britain and France, supported this.

Around the world, people from countries such as Myanmar, Syria and Yemen are asking why their plight did not generate as swift reaction as did Ukraine. The Tigraians ask the same question.

This is not a contest. Ukrainian cities should be protected. Civilians must be rescued. The resistance forces should be assisted. The aggression of Putin should be stopped and his accomplices should be named, shamed and punished.

Tigrai is not asking to be on a par with Ukraine. It is asking a little humanity.  A few sanctions targeting the key officials perpetrating violence and their partners, an air bridge for humanitarian assistance and a no-fly zone protecting the skies of Tigrai from aerial attacks. Western nations’ expression of “deep concerns” and its flurry of congratulatory tweets when a few metric tons of medicine trickle through is not helping much. Twenty trucks of food is not enough for a single breakfast in Tigray, and that is all that have got through this year.

A year ago Tigraians were hopeful that principles and promises from the western nations were meaningful. Today, we have learned a painful truth.

The prevailing attitude on both shores of Atlantic Ocean recalls the infamous remark of British PM Chamberlain in 1938 trivializing Hitler’s annexation of Czechoslovakian territory as “a quarrel in a faraway country between people of whom we know nothing.”

Today Ukraine is not treated as “a faraway” land, but Tigrai is.

The international response to Ukraine has reminded us that democratic nations can respond swiftly and effectively to aggressive war and their governments do have the tools to act against war crimes. Tigraians are hopeful that this response sets the standard for dealing with bellicose autocrats and medieval warfare tactics around the world. We hope we are not just a “faraway place” where international norms do not reach.

Daniel Berhane is a blogger currently residing in Mekelle, the capital of the besieged region of Tigrai. This article draws on his upcoming book on the Tigrai war.