Sudan’s Path of Hunger ‘Tigray’s Wounded Agriculture and a Second Year of Famine: An Urgent Call for Action’ 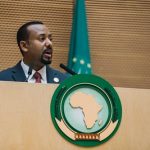 Does Abiy Ahmed have the skills needed to make peace? In this post I won’t examine his record in office but his capacity to understand peacemaking, based on his academic writing.

Abiy Ahmed was awarded a PhD from the Institute of Peace and Security Studies at Addis Ababa University in 2017. What does this tell us about Abiy and his vision for peace in Ethiopia?

Abiy’s books on Medemer have come in for criticism for being superficial. Many have given him the benefit of the doubt because he holds a PhD, and a doctoral dissertation is a serious academic endeavor, and Addis Ababa’s IPSS was a reputable institution.

I invite readers to examine Abiy’s thesis and make their own assessment. It’s available to read here. It is dated November 2016. For me, it raises important questions.

Pictures of Abiy’s PhD examination and celebration can be found here.

I was involved in the IPSS from its early days as a visiting faculty member. The World Peace Foundation enjoyed a partnership agreement with the Institute. I played a role in the establishment of the Tana High Level Forum on peace and security in Africa, created by the IPSS leadership in 2012, and served on its advisory board. I ended my association with the IPSS in 2015 when its academic independence was compromised by political interference and discontinued my role in the Tana Forum the following year.

I recall the excitement at the IPSS when the PhD program was first launched, and one of the tukuls (round huts) in the Institute’s grounds was fitted out for the PhD students’ workstations. I contributed my comments to the coursework requirements and dissertation criteria for the doctorate. In my 2015 address to the incoming cohort of IPSS research fellows and PhD students, I stressed that analytical reflection on a candidate’s professional experience in peace and security should be given equal weight alongside more conventional forms of scholarship.

I never met Abiy on my visits to the IPSS and indeed he didn’t make much of an appearance at the lectures and seminars or show up in the ‘PhD tukul’. In fact, the first I learned of Abiy’s research was in May 2017 when his dissertation defense was announced. As I knew his supervisor Prof. Amr Abdalla, I was keen to know what he had produced.

The buzz around the Institute was that a senior member of the Oromo People’s Democratic Organization (OPDO) was getting his PhD and so the staff and students should show up. The pictures of the event show a formidable line-up of Abiy’s peer group behind the candidate, including General Abadula Gemede, Workineh Gebeyehu and Shimelis Abdisa—all senior OPDO figures—as well as, I’m told, some of his friends from the security and intelligence.

Abiy duly passed his examination and was awarded his PhD.

He went from admission to submission in record time: a mere 26 months. To accomplish that requires scholar capable of working a miracle. But this thesis is no miracle.

The title is ‘Social Capital and Its Role in Traditional Conflict Resolution in Ethiopia: The Case of Jimma Zone.’

It is in this dissertation that Abiy presents his concept of social capital, which in turn is central to the two books published under his name, Medemer and The Path of Medemer. So we should be able to delve into the thesis to find the intellectual substance behind his popular books.

As well as the thesis itself we can watch a video presentation of his thesis proposal (dated September 2015), and read an article he contributed to the Life and Peace Institute’s journal, Horn of Africa Bulletin, entitled ‘Countering Violent Extremism Through Social Capital: Anecdote from Jimma, Ethiopia.’

What can we learn from these about Abiy’s theory and way of thinking?

Like many researchers, his starting point is a vivid story. This appears on pages 128-9 of the thesis, where he describes the polarized and hostile environment prevailing in the aftermath of a violent clash in Jimma. He writes:

Moreover, the animosity between Christians and Muslims that prevailed in the area was a glaring fact that made the need to devise a sustainable resolution quite an apparent one. The need for someone to step in and assume the responsibility of spearheading the way forward was dire. It was at this time that Kesis Tagay and Sheikh Abdulhamid decided to use their longtime friendship to help bring harmony in the area. According to their account, they agreed on the need to promote the interaction between members of the Muslim and Christian communities. They were convinced. That inter-religious interaction was the key to break the animosity and overcome the deep hatred the community members reflected on each other. The first thing they did could simply considered as a routine and normal but proved to be a critical gesture of the possibility of peaceful Muslim-Christian interaction. According to Kesis Tagay,

‘We decided to ride on the back of Sheikh Abdulhamid’s motorbike together. We went around the quarters of Agaro town every day making sure that as much people as possible watched us. At first, the reaction we observed from the public was perplexity and astonishment. People were asking how we could do this after all the members of the communities went through.’

This story of inter-faith friendship is also the substance of the paper in the Horn of Africa Bulletin, which the editors correctly entitled ‘An Anecdote.’

An academic reviewer would regard this as a beginning—only. A nice story and perhaps enough for an undergraduate paper. The anecdote seems to imply that Abiy sees social capital as interpersonal relations that bridge a divide, and that the way to resolve conflict is to have more of these friendships. In Abiy’s account there wasn’t much dialogue or debate, just friendship and interaction. The idea that this is peacemaking is obviously not a serious academic hypothesis. But it gives us an insight into the Ethiopian PM’s mindset.

I invite academic reviews of Abiy’s thesis. My own view is that the writer hasn’t taken the time or expended the intellectual effort to understand the core concepts of social capital or the vast literature on armed conflict and its resolution. The thesis makes no attempt to engage with the literature on identity, nationalism and conflict. It’s a version of the kesis-sheikh motorbike ride, a quick buzz around the neighborhood to show the author’s face.

Abiy also introduces the concept of ‘synergy’ in his video proposal (see 20.06), placing it within an approach to social capital, that combines ‘top-down’ and ‘bottom-up.’ The language here is a mix of development jargon and self-help business manual speak.

Abiy’s comparisons, including Cambodia and Rwanda, are frankly superficial. There could be value in the view that the Rwanda genocide was the outcome of bonding social capital being perverted in the cause of further conflict (see 6.09). Hutu extremists did indeed seek to create solidarity among the killers, aiming to change their group’s collective identity in the process. But Abiy doesn’t explore this. Instead, he goes on to say, ‘Both Hutu and Tutsi appreciate their group’s value while they lose tolerance of different group which led them to a very devastating conflict in that nation.’ This doesn’t mean anything at all.

The literature review and theoretical development sections of a dissertation should be akin to a reflective dialogue with the leading authorities in the field. Abiy’s chapters are more like a friendly exchange of pleasantries before moving on, an exercise in ticking boxes.

There’s another angle to the ‘Anecdote’ article. This is the agenda of countering violent extremism, by which Abiy seems to mean jihadism imported from Arab countries. In this focus, and also in the conceptualization of social capital as interpersonal relations across an identity divide, we can see clearly the influence of his PhD supervisor, Amr Abdalla—a lawyer turned peace advocate, and an enthusiastic proponent of peacemaking based on transforming the individual person’s outlook.

Amr is an Egyptian who was a state prosecutor responsible for investigating militants. He became convinced that the best approach to eradicating extremism was through religious doctrinal revisions, namely persuading young jihadists to recognize that Islam advocates tolerance and love. Introducing a manual for peacemaking, he writes, ‘The theme of “Islam started with a love story” underlies this entire manual.’ Amr played a leading role in the 2015 Tana Forum, which had the theme ‘Secularism and Politicized Faith,’ where he pressed this approach: ‘By renouncing violence and adhering to the principles of non-violent co-existence, the Doctrine Revisions may further strengthen African models of secularism while preserving the spiritual and religious modes of lives.’

This is very limited. It focuses on individual attitudinal change, not structural change, and chimes with a religious philosophy that sees peace as the work of charismatic individuals. It’s the Muslim version of a Pentecostalist religious sensibility, which sees only the individual person and the creator, dissolving all political, economic and social structures in between.

The final, methodological section of Abiy’s proposal is both very ambitious and very vague. He proposes a survey-based approach, aggregating data from structured interviews to draw conclusions about social capital and how it may be changing. He lays out a plan for interviewing that would be extremely time-consuming to undertake, and even more laborious to analyze.

The date on the video is September 2015. The date when he submitted his thesis is November 2016.

I have come across no evidence that Abiy violated any of the procedures of Addis Ababa University. Standard procedures involve ensuring that the candidate conducted the fieldwork (and supervised any enumerators) and oversaw the data analysis, as well as checking the text for plagiarism. Like any PhD candidate, he will have signed an avowal that it is original research and that he is the exclusive author of the thesis.

Nonetheless, I fail to see how it would be possible to finalize the research plan, undertake the fieldwork, analyze the data, and write it up in fourteen months. Especially if the candidate were also very busy with the demands of a political office.

It would be understandable if Abiy’s examiners felt intimidated by the array of senior OPDO figures and security officers sitting behind the candidate during his examination and decided to treat him gently. But it would be disturbing if the man who claims the credit for this dissertation actually believed that it is a respectable piece of scholarship. And more worrying still, if he saw it as the intellectual basis for making peace in Ethiopia.

Ethiopians might be forgiven for thinking that peace talks and national dialogue in their country add up to no more being taken for a bumpy ride on the back of a motorbike around a small town, with the rider giving a blessing, waving and moving on.