‘Tigray’s Wounded Agriculture and a Second Year of Famine: An Urgent Call for Action’ Digital feast and famine: Digital technologies and humanitarian law in food security, starvation and famine risk 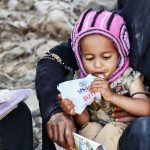 How Not to End Mass Starvation

The United Nations has announced a plan to alleviate world hunger and prevent famine. If the steps are implemented they may ease global food prices. But they won’t stop today’s famines, most of which are deliberately inflicted in the course of war.

From historic lows five years ago, the numbers of people around the world facing hunger have been steeply climbing.  Droughts and floods made worse by climate crisis are partly to blame. So too massive impoverishment caused by Covid-19. Today the most urgent issue is the disruption to the world’s supplies of wheat and cooking oil caused by Russia’s invasion of Ukraine and an imminent shortage of fertilizers as two of world’s three biggest producers—Russia and Belarus—suffer sanctions.

With rising fuel and food costs, the World Food Programme’s operating costs have risen more than 40 percent over the last year. With the sole exception of Ukraine, all its appeals are seriously under-funded.

World leaders met in New York last week to consider emergency action to patch up the world’s fragile world food system. Guterres identified ‘five urgent steps to solve the short-term crisis and prevent long-term catastrophe.’ Steps one to four were to do with increasing the supply of food and fertilizers, and improving and financing social protection systems. He continued, ‘Fifth, humanitarian operations must be fully funded to prevent famine and reduce hunger.’

All are important. But there was a glaring omission. Having observed that the ‘frightening figures’ for food crisis ‘are inextricably linked with conflict’, Guterres had nothing to say about starvation crimes.

According to the UN, there are nine situations of medium or high risk of famine in 2022. Two are in Asia: Afghanistan and Yemen. Seven are in Africa: Ethiopia, South Sudan, Somalia, Nigeria, the Democratic Republic of Congo, Madagascar and the West African Sahel. In almost all the immediate reason for mass hunger is armed conflict. Only in Madagascar and some Sahelian countries is there peace. In many—notoriously Ethiopia’s Tigray region, in South Sudan and in Yemen—starvation is a deliberate war strategy.

To put it baldly, having more and cheaper food won’t do anything when war leaders are destroying food stocks, preventing farmers from planting, and blocking life-saving aid.

This isn’t new. The starvation siege is a war tactic as old as the Roman war on Carthage. But in recent years many countries have said it’s intolerable.

When he addressed UN Security Council on May 18, Guterres gave a nod to resolution 2417—but only in vague terms. He said it was important to end Ukraine’s war. He didn’t invoke the resolution to call out the perpetrators of starvation crimes.

Over the last four years, the Security Council should have discussed a dozen or more countries where war was threatening food crisis. But although the reporting guidelines set up by resolution 2417 have been doing the rounds in committees—with Britain claiming to champion of the issue—there’s been no formal debate, still less any action. Ireland lobbied hard for the man-made famine in the Tigray region of Ethiopia to be discussed at the Security Council, but couldn’t get enough support to get a statement, let alone a resolution.

With its veto, Russia can block any resolution it doesn’t like. But it cannot stop the Secretary General, or members of the Council, from taking a stand on principle and law. In 2019, the states that are party to the Rome Statute of the International Criminal Court passed an amendment that expressly prohibited the war crime of starvation in non-international armed conflicts. The following year the World Food Programme won the Nobel Peace Prize for these efforts.

Russia voted for resolution 2417, though its ambassador said that hunger should really be a matter for agricultural and welfare policy and wasn’t a threat to peace and security. Sadly, the Russian doctrine that food and famine are matters for social and economic policy alone, seems to be winning the day.

Guterres’s timid silence last week on starvation crimes isn’t just an omission, it’s a cover up. By implying that man-made famines will be prevented by economic policies and administrative measures, he is diverting attention from starvation crimes—and allowing the men who perpetrate these crimes to rest easy, knowing they won’t be called to account.

The UN’s five steps would help millions of poor and hungry people, but let’s not pretend they will stop today’s famines.