Addressing Narratives Normalizing Weaponized Sexual Violence: The Case of Tigray What You Can Do to Help Decarcerate Women and Girls in Massachusetts 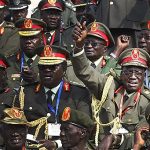 Can political finance explain the different development stories in Ethiopia and Sudan?

Ethiopia and Sudan share a common border, the Blue Nile, and political and economic challenges ranging from separatism to chronic food insecurity. Both states nearly collapsed at the cusp of the 1990s. Yet they are rarely compared in academic or policy literature — despite a thought-provoking contrast in their developmental trajectories. In the policymakers’ caricature, Ethiopia became a model for an African developmental state while Sudan was reduced to a rentier kleptocracy which experienced intractable, overlapping, crises.

It is well-known that political leaders in Addis Ababa and Khartoum adopted very different political and economic policies. Ethiopians forged what Stefan Dercon calls the ‘development bargain’ — the commitment by the political elite to delivering economic development. Sudanese did not. The nature of the political settlement (the distribution or balance of power between elites) in the two countries played a role in defining their respective developmental paths. But why did such different political settlements emerge in the two countries?

In a forthcoming paper, we argue that ‘political finance’ (PF) is a key explanatory variable. PF refers to the discretionary cash available to a politician, or the politician’s ability to give, deprive or take away material rewards. It is prominent in a political marketplace. PF is not the same as the official budget, or state finance and is distinct from the broader political economy (PE). PF refers to the financial resources used for the day-to-day conduct of politics, while PE encompasses the broader relationship between political institutions, the political environment, and the economic system.

The paper draws two tentative conclusions from a historical analysis of the relationship between PF and political settlements in the two countries (see the timeline in Figure 1). These are outlined below and can be thought of as hypotheses — to be tested and refined using other cases.

Figure 1: A timeline of key events/periods in Sudan and Ethiopia

First, the nature of political finance – that is, what form it takes, how concentrated it is in the hands of politicians, how easy it is to divert for political purposes, where it comes from — has been a key determinant of the political settlement in both Ethiopia and Sudan, always mediated by violence or coercion. In both countries, PF influenced the way in which violence and war – and by extension the state – were organized. This, in turn, shaped the political settlement among elites. Political competition also influenced how and why political actors sought PF, how much money was needed, and from who they sought finance.

Compare the trajectory of Sudan and Ethiopia in the 1970s and the 1980s. In the 1970’s, Sudan’s political economy was based on agrarian capitalism, borrowing for developmental projects, Islamic finance, and remittances from migrant workers in Gulf countries. President Jaafar Nimeiri did not have exclusive control over any of these sources of money, and only some of the borrowing was easily diverted for political purposes by him. As a result, Nimeiri was only one of several players in the political arena, competing with others to distribute largesse in the form of patronage.

By the late 1970s, Sudan’s debt-fuelled economic boom had ended, and macro-economic crisis was deepening. What followed was extraordinary austerity, where the state withdrew from multiple facets of public life. Most crucially, control over violence was privatized, deregulated, and decentralized, especially in peripheral regions, where militia proliferated. A decade on, the principal means of material reward available to the bankrupt Sudanese state was granting license to pillage, so that militia looted, burned and killed their way through swathes of southern Sudan. The armed opposition took much the same form. In the words of its founder John Garang, the Sudan People’s Liberation Army was ‘a mob’ which he spent years trying to reform.

In Ethiopia, on the other hand, foreign military patronage delivered material support which sustained the Dergue military regime through state crisis. After overthrowing the imperial government in 1974, Colonel Mengistu Hailemariam and his junta ruthlessly centralized political power and eviscerated the prior feudal and mercantile classes along with civilian opposition. Over time, the Dergue’s command economy and experiments in socialist engineering proved economically disastrous. In the absence of substantial domestic sources of revenue, external military and military support from the Soviet bloc was essential to state survival. That support allowed the Dergue to create a massive military-party apparatus and assemble the largest conventional army in sub-Saharan Africa during a period of deepening economic crisis. The rebel movements which emerged in Ethiopia and Eritrea – the Tigray People’s Liberation Front, and the Eritrean People’s Liberation Front, also mirrored the state-form. They ultimately overthrew the Dergue in 1991.

These differences in the organization of the state and violence shaped the developmental trajectories of Ethiopia and Sudan over the following decades.

Second, political leaders always seek to exert control over and centralise the sources of political finance – whether to simply stay in power, or to pursue developmental or ideological projects or both. Where politicians have been able to do so and are able to operate according to a relatively long-time horizon with a developmental mindset, sustained economic growth has been the result. Political settlements – no matter how unstable — create institutional configurations in states which are difficult to alter in the short term. This can sustain growth episodes through periods of domestic and global turbulence. However, short spurts of economic growth may also occur due to political economic changes unrelated to the changes in the political settlement – for instance, due to a boom in primary commodity exports such as oil.  Institutional stickiness also means that these changes in the political economy do not substantially reconfigure the rules of politics.

Through the 1990s and 2000s, the rules of politics in Sudan and Ethiopia stayed largely the same, even as their political economies were transformed. In Sudan, the rules of transactional politics were well established by this time – shaped by the experience of extended austerity in the 1980s. The oil boom simply resulted in a grander scale of bribery and patronage. Centralized flows of PF in the form of oil rents strengthened those who controlled the state-form. After the Comprehensive Peace Agreement was signed in 2005, the SPLM in southern Sudan took control of oil revenues and was able to outspend al-Bashir, creating a vast patronage mechanism centred on the army. The changes in PF reconfigured elite dynamics and elite positioning and power, but the rules of the political game remained the same.

In Ethiopia, 1991 marked a regime rupture, with an end to the civil war, the creation of a federal system, and a focus on economic development. But the state remained bureaucratic-authoritarian and there was no substantial political competition. The EPRDF leadership channelled PF through state and party structures, restricting parallel sources of PF. After a closely contested election in 2005, the EPRDF decided that its political legitimacy depended on delivering basic services and rapid economic development. This development strategy was financed through the generating ‘rents’ from state control over strategic sectors of the economy. At the same time, increasing amounts of external financial support were mobilised in the form of official development assistance, concessional loans, and debt (especially Chinese investment). Politically, the ‘developmental bargain’ was delivered through a centralized and authoritarian political system where the organs of the party were fused, by design, with the state bureaucracy. The nature of the elite settlement and the centralization and bureaucratization of political power allowed for PF to be centralised and yoked to the project of building a ‘developmental state’. For fifteen years after 2004, Ethiopia’s economy was the fastest-growing in the world — though questions remain about whether growth was equitable. And rather than regulating PF, the EPRDF tried to stamp it out altogether – with the consequence that when the post-EPRDF leadership liberalized the political arena, it became a free-for-all without commonly accepted rules for political competition.

If these hypotheses are correct, scholars and policymakers studying/working on war and development in poorly institutionalized countries need to be more attentive to how politics are financed, and the ways in which finance shapes the organization of violence, and political settlements. The futures of both Ethiopia and Sudan will almost certainly be shaped by who pays for politics.

This article was produced as part of the Peace and Conflict Resolution Evidence Platform (PeaceRep), funded by UK Aid from the UK Foreign, Commonwealth & Development Office (FCDO) for the benefit of developing countries. PeaceRep is a seven-year research consortium led by the University of Edinburgh Law School.