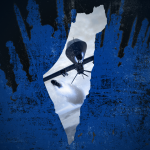 Drones in the Formation, Development, and Militarization of Israel

Israel has only recently acknowledged that it uses drones to carry out strikes, despite the fact that its Artillery Corps unit 5252 has operated attack drones for more than two decades. Israel’s extensive history of drone development and deployment has assisted in the state’s ability to maintain political, economic, and military hegemony in the region. Israel utilized drones as early as 1971, and they quickly became a staple of Israeli war-making and state-making. Arms, especially drones, are a key driver of the state’s economy. They also help forge strategic partnerships through trade that continues to increase Israel’s global power and influence. Drones are not simply weaponry, they have played a key role in Israel’s formation, development, and militarization.

Israeli Drones and the Arms Trade

According to New America, Israel has exported drones to at least 56 countries, despite the restrictions placed on Israeli drone manufacturers to openly advertise their technology. In 2021, drones made up 9 percent of Israel’s record-breaking $11.3 billion in arms exports, resulting in at least $1 billion in sales. Israel has not disclosed how many attack drones it has nor has the state provided a full list of how many drones it has exported. However, as revealed in “Business As Usual: How major weapons exporters arm the world’s conflicts,” by Sam Perlo-Freeman (World Peace Foundation, 2021), Israeli arms exports follow a troubling pattern. Perlo-Freeman found that for some of the world’s top exporters, such as Israel, Russia, France, Spain, and the Netherlands, conflict appears to be associated with a higher probability of major conventional arms exports. For the other exporters, it made no significant difference either way. From 2009 to 2018, Israel supplied arms, including drones, to active participants in conflicts in Afghanistan, Ethiopia, India, Libya, Myanmar, Nigeria, Somalia, Turkey –and the list goes on and on.

The “tools of occupation,” or the military weapons and tactics Israel deploys on the Palestinian population, are the material form of what Benjamin Netanyahu, Israel’s former Prime Minister facing felony corruption charges, called the state’s “policy towards the Arab world.” Which is why Israel differs from other top exporters in that it has only recently begun to normalize relations with Arab or Muslim states. Since the Abraham Accords were signed in September 2020, Israel has set a new record for its volume of military and security exports, an increase of $2.7 billion.

Today’s patterns of drone usage were honed in earlier operations in Egypt, Lebanon, and Palestine.

Israel’s Evolving Use of Drones

One of Israel’s first known usage of drones happened during the War of Attrition. After Israel captured the Sinai Peninsula during the Six-Day War in 1967, Egypt and Israel began to engage in the war. Egypt utilized anti-aircraft systems, which resulted in the deaths of several Israeli soldiers. Shortly after, Israel began to explore new surveillance options that would eliminate the risk to their forces, which led to Israel secretly buying twelve Firebees from the United States in 1970. In 1971, Israel employed the Firebees, usually used for night reconnaissance, at Refidim Airbase 90 km from the Suez Canal. Abraham Karem, a former aeronautical engineer for Israel Aerospace Industries (IAI) who moved to the United States to develop the Predator drone, eventually modified the Firebees into decoys, which would mislead anti-aircraft defense systems. The Firebee decoys were deployed to effectively evade 32 Egyptian missiles during the 1973 October War. After the October War, the Israeli government continued focusing on drone development, seeking to create a drone that would be able to provide real-time surveillance.

In 1981, IAI developed the first Israeli-made drone, the IAI Scout, which was used for surveillance during Israeli military operations in Lebanon in 1982. In 1983, Thomas Friedman reported, “Israel has been using drones to test the radar frequencies and reactions of Syrian surface-to-air missile batteries and to provide televised aerial reconnaissance of Syrian positions.” In 1992, a Scout drone was used to pinpoint the location of the leader of Hezbollah, Sheik Abbas al-Musawi, who was then killed by Israeli helicopter gunships. Israel’s use of drones against Hezbollah continued during “Operation Accountability” in 1993 as “Israeli forces conducted 27 drone flights over Lebanon concurrently with a number of air strikes against militant organisations.” Israeli drone technology continued to evolve, ultimately leading to the use of armed drones in the Gaza Strip.

The drone operations in Palestine differ substantially from those conducted in Egypt and Lebanon. While Israel has implemented similar strategies against all three territories, the state’s deployment of drones in the illegally occupied territories differs in that drones are used to control, contain, and separate the Palestinian population. In 2000, the Israeli Air Force admitted to using drones to gather intelligence and determine the coordinates of “terrorist targets.” In 2002, intelligence obtained with drones was used to direct armed helicopters to kill Palestinians in Jenin.

Two years later, following in the footsteps of the US, who had begun to use armed drones in Afghanistan, Israel completed its first drone operated targeted assassinations in the Gaza Strip. The precise starting point for Israel’s use of drones to assassinate people in Gaza is contested, but at least by 2004 this practice was documented by Israeli journalists. According to the Jerusalem Post, on October 26, 2004, “Israel has been deploying ‘killer’ pilotless aircraft in its battle against Palestinian terrorists in the Gaza Strip and used one Sunday to kill two militants.” However, the Palestinian Authority claimed that Israel had been using drones to assassinate Hamas leaders for “some time.”

Israeli use of drones is crucial in managing Gaza as what Lisa Bhungalia, a political geographer specializing in race, violence, and empire, describes as a “hostile entity.” She notes that “…this territory and the population therein into a post-9/11 Manichean theatre comprised of humanity fighting the mujahideen, the besieged versus the barbaric: Gaza (as Hamas) is situated on one side of this coin, and Israel, on the other.” For instance, in 2014, the Israeli Air Force carried out two strikes against “Hamas” at a beach in Gaza, even though there were no members of Hamas reported in the vicinity. In fact, the state killed four children playing near a container. This geopolitical narration is still in effect as Israel’s use of armed drones in the Gaza Strip continues to dramatically increase, violating international humanitarian law and the law of armed conflict.

Not only does this framework allow Israel to conduct targeted attacks on whomever the state considers a legitimate target, but it also allows Israel to restrict Palestinian mobility. Walid Dawoud, a Palestinian living under the Israeli blockade in Gaza, said, “These drones – they don’t always know… At night, if I hear one, I’ll cancel my plans to see friends. It’s easy – if one is above me, I won’t go out.” The presence of drones alone influences the movement of Palestinian people, and their fears are warranted. Drones enable a change in how the geography of the crisis is managed. In other words, the hostile entity narration that the Israeli state created for Palestinians blurs the line between civilian and combatant, placing all Palestinians into the category of those deemed worthy of death. In doing so, Palestinians are exposed to more arbitrary violence.

Regardless of whose drones are flying over a conflict zone, Israeli arms are often viewed by potential buyers as the most effective because of the regularity and high visibility of their use against Palestinians. Israel’s “combat proven,” “battle-hardened” drones are not the only thing exported, their logics of violence are exported as well. For example, the widespread use of drones in the Ukrainian war have showcased their capacities and increased the market globally. IAI, Israel’s largest aerospace and defense company, is reporting “the most profitable period in the history of the aerospace industry: net profit jumped by 54% to approximately $202 million.” After having experienced a bit of a hiatus on mega deals, IAI recently signed two agreements (that included drones) worth a combined value of approximately $1 billion with the Israeli Ministry of Defense and a “foreign country.” IAI is not the only Israeli arms company that has reported an increase in sales, Elbit Systems, who supplies over 85% of Israel’s drone fleet, and Rafael Advanced Defense Systems have also disclosed increases.

In conclusion, understanding the use of drones in the formation, development, and militarization of Israel is important for three reasons: 1) Israel’s “success” with drone sales today is the result of experimentation and evolution in how the country has used this technology to advance political, economic, and military hegemony in the region. 2) The ways in which arms, specifically drones, have been used to secure and sustain strategic partnerships, allowing Israel to reap the many benefits of being a top exporter. And, 3) the exportation of the logics of violence. Increasing reliance on drones is not limited to Israel, but its long duration of using drones and the myriad roles this weapon plays in Israeli hands makes the Israeli case instructive. State militaries, and the industry that supplies them, claim that drones are a more humane weapon, but the reality on the ground tells a different tale. Drones blur the lines between civilian and combatant, allowing military forces to manage populations through surveillance and control via the threat or actualization of violence, and fuel new arms races. Israel’s history also instructs us that we will see yet more uses of this deadly weapon. For this reason, the use of drone technology must be heavily and consistently critiqued, regardless of which state deploys it.

B. Arneson is the Director for WPF’s Global Arms and Corruption Program. She also is a Research Coordinator for the Corruption Tracker, an up-to-date, online database of all cases and robust allegations of corruption in the global arms trade. She is also the Founder of Paperbacks for Perpetrators, a project that provides books to individuals who are incarcerated in the US.