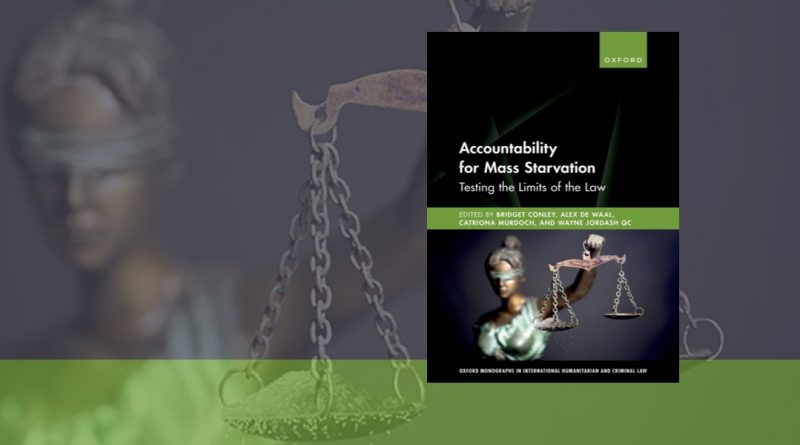 Famine is an age-old scourge that almost disappeared in our lifetime. Between 2000 and 2011 there were no famines and deaths in humanitarian emergencies were much reduced. The humanitarian agenda was ascendant. Then, in 2017, the United Nations identified four situations that threatened famine or breached that threshold in north-eastern Nigeria, Somalia, South Sudan, and Yemen. Today, this list is longer. Each of these famines is the result of military actions and exclusionary, authoritarian politics conducted without regard to the wellbeing or even the survival of people.

Testing the Limits of the Law

Violations of international law including blockading ports, attacks on health facilities, violence against humanitarian workers, and obstruction of relief aid are carried out with renewed impunity. Yet there is an array of legal offenses, ranging from war crimes and crimes against humanity to genocide, available to a prosecutor to hold individuals to account for the deliberate starvation of civilians. However, there has been a dearth of investigations and accountability for those violating international law.

The reasons for this neglect and the gaps between the black-letter law and practice are explored in this timely volume. It provides a comprehensive overview of the key themes and cases required to catalyze a new approach to understanding the law as it relates to starvation. It also illustrates the complications of historical and ongoing situations where starvation is used as a weapon of war, and provides expert analysis on defining starvation, early warning systems, gender and mass starvation, the use of sanctions, journalistic reporting, and memorialization of famine.

Bridget Conley is Research Director of the World Peace Foundation (WPF) and Associate Research Professor at The Fletcher School, Tufts University. Her work focuses on mass atrocities and genocide, memory and violence, and how museums can engage on human rights issues. She previously worked at the U.S. Holocaust Memorial Museum, leading the Museum’s research and projects on contemporary threats of genocide.

Alex de Waal is Executive Director of the World Peace Foundation, and Research Professor at the Fletcher School, Tufts University. He has worked on the Horn of Africa and humanitarian issues since the 1980s as a researcher and practitioner, focusing on famine and humanitarian crises, including the African Union High-Level Panel on Sudan and South Sudan.

Catriona Murdoch is a Partner at Global Rights Compliance (GRC) with expertise on the crime of starvation and accountability for atrocity crimes. At GRC, she manages the strategy to advance accountability for the crime of starvation. In this role, she leads large grant programmes in support of the agenda and provides legal advice to States, UN bodies, and CSOs to assess the legality and accountability prospects of conflict-induced hunger. Separately, in support of GRC’s broader conflict work, Catriona provides advice on accountability strategies and works with CSOs to investigate and prosecute international crimes.