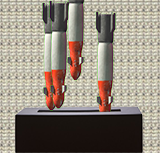 Talk of corruption in the global arms business conjures up salacious images of personal enrichment. But arms deals produce profits for multiple purposes, not least of which is to keep a political machine running. Greed as a motive for graft captures headlines more readily than ambition – if for no other reason that it is more relatable. Nonetheless, a failure to appreciate the importance of corruption in creating and maintaining political power can in turn lead to underestimating the impact of corruption within political systems.

This occasional paper examines the link between political finance and corruption in the arms trade. It draws on the World Peace Foundation’s Compendium of Arms Trade Corruption, a collection of 29 cases of corruption in the arms trade and the broader military sector from around the world, each containing a standard set of summary information along with a narrative description. The arms trade has many features that make it highly susceptible to corruption. This paper makes the case that it also has four key features that tie it particularly closely to political competition and political finance. First, the arms trade can involve extremely large contracts from which corrupt politicians, even with only light skimming, can obtain a large absolute sum of funding for political finance. Second, the secrecy and sensitivity of decision-making on arms trade policies and the complexity — real or artificial — of the technical arrangements of a deal provide opportunities to mask embezzlement, kickbacks, tender manipulation, or other forms of corruption. Third, in countries where access to arms is itself an integral component of political power, the success of an arms deal can itself be a political factor. Most importantly, international arms deals are intrinsically connected to political power in both exporter and importer countries, giving politicians a direct role in decision-making, which can be leveraged to obtain corrupt political benefits.