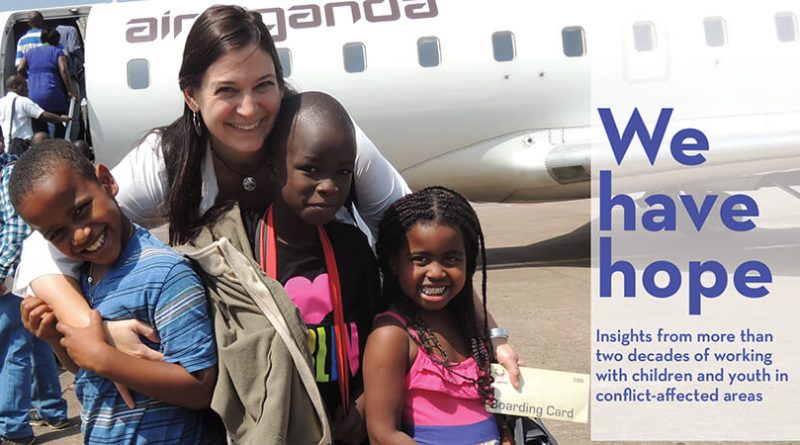 ‘We Have Hope’: Resilience Among Violence Affected Youth

WPF Senior Fellow, Dyan Mazurana, has written a manuscript, `We Have Hope’: Resilience Among Violence Affected Youth. It draws on Mazurana’s more than two decades of working with children and youth in conflict-affected areas. She invites readers to slip behind the statistics that often dominate our understanding of ‘children in conflict,’ and to hear what these young people have to say. Mazurana reveals the devastating challenges kids face, and how some of them, despite all odds, thrive. A book of enormous depth and empathy, it teaches readers that the first step to transformation is paying attention.

Overview | The Stories| About | Teaching |Publications

FACT: Most young people that survive war and violence go on to lead meaningful and relatively successful lives.

FACT: Media accounts, films and books are filled with real, heart-wrenching accounts of the horrors young people face in war.

How do we make sense of this seeming disconnect?

Taking a different approach to young people living in violence

Meeting truly complicated and inspiring young people in every armed conflict-affected location I have worked in over the last twenty years made me wonder what it is that makes some young people able to not only survive but to thrive in the face of such tremendous odds?  Is there something special about them?  Is it something about their environment? Or is it a particular combination of both?

Curious to know more, I looked at what the research on war-affected young people had to say.  Here’s what I found: the vast majority of research on war-affected young people has focused on the ones who are suffering and not functioning well.  Given the deprivations and horrors that many children and youth encounter during war, it’s hardly surprising that most research looks to understand how this harms them and identify what could be done in an attempt to protect them from the effects of war, or at least lessen the effects.

My book takes a very different approach to young people living in violence.  It is grounded in the belief that children’s and youth’s voices, perspectives, actions, and ideas are important and should be heard.  Their stories may surprise us, causing us to think and act differently.  Through their voices we learn about these young people, their families and friends, and the context in which they live and grow.  We hear what they prioritize and how they strategize to meet their priorities.  We discover what they actually do to try and protect themselves, their families and their communities from violence and harm.  We begin to understand what helps them to cope, mature and thrive.  We explore their goals, hopes, and plans for a better life.  We see their attempts, often against great odds, to create a better future.  In fact, as this book shows, these young people may be the very ones we turn to in order to understand and address some of the most serious problems besetting their countries and our world.

In this book the young people who are our guides are affected by violence and war from Afghanistan, Bosnia-Herzegovina, Brazil, Colombia, Ethiopia, Iraq, Nepal, Palestine, South Sudan, Uganda, the United Kingdom and Vietnam, among others.  Many of the stories I share, and the insights that I draw from them, I collected over two decades carrying out field research with young people living through armed conflict.  The young guides who lead and enlighten us through this book are not the ones we usually–or ever–hear or turn to for insight and solutions.  Yet their lived realities and insights are direct, piercing and, once you encounter them, unforgettable.

The Stories: An audio introduction

In the below audio clips, Dyana Mazurana provides a glimpse of some of the stories about children that compose this project.

Part 1: The heart and soul of this book

Dyan Mazurana has conducted research in war zones around the world. Everywhere, despite conditions of violence, poverty and enormous struggle, she met inspiring young people.

Image: A group of girls in Afghanistan (Dyan Mazurana, circa 2003)

Kushanu, an “untouchable” Dalit and a child soldier in Nepal, extends a mysterious invitation that allowed Dyan to witness his life-sustaining musical talent.

Ida, a former member of the Maoist insurgency in Nepal, tells Dyan that being a soldier gave her confidence — including the willpower to leave the group and pursue her education.

Dyan tells us how and why we need to move beyond labels and never dismiss those who have suffered as a ‘lost generation.’

Dyan Mazurana is a Research Professor at both the Fletcher School of Law and Diplomacy and the Friedman School of Nutrition at Tufts University, US and a Senior Fellow at the World Peace Foundation. Her work focuses on the impact of armed conflict on women and children, and she worked in Afghanistan, the Balkans, Nepal, and southern, west and east Africa. She has published six books and over 100 scholarly and policy articles, and international reports. She publishes in the top scholarly journals within the fields of political science, international relations, public health/general medicine, gender studies, and development, with top scholarly publishers in these same fields for my books and book chapters, including Cambridge University Press, Harvard University Press, Oxford University Press, and Polity Press.

She has authored eight high-level reports for the United Nations Secretary-General and the United-Nations Security Council. Her publications have been translated into over 30 languages and she regularly gives interviews to media, including Associated Press, Al Jazeera, BBC (television and radio), Canadian Broadcast Corporation, CNN, France Television, The Guardian, International Public Radio, Fox News, MSNBC, National Public Radio, The New York Times, Public Radio International, and Reuters, among others.

Mazurana utilized the scholarship she explored in writing `We Have Hope’ to create a new graduate course at Fletcher, “Children, Violence, Protection & Resilience.”  The course was first offered in Spring 2020.

Dyan Mazurana’s publications developed through her World Peace Foundation Fellowship use gender analysis to focus on the violence experienced by civilian populations, and the ways that perpetrators are motivated and they violence they inflict.  Her work then investigates how both victims and former perpetrators emerge from armed conflict and a range of challenges they face in the lives moving forward because of their wartime experiences.

For a full listing of Dr. Mazurana’s publications, beyond those related to her WPF fellowship, visit the Feinstein International Center.