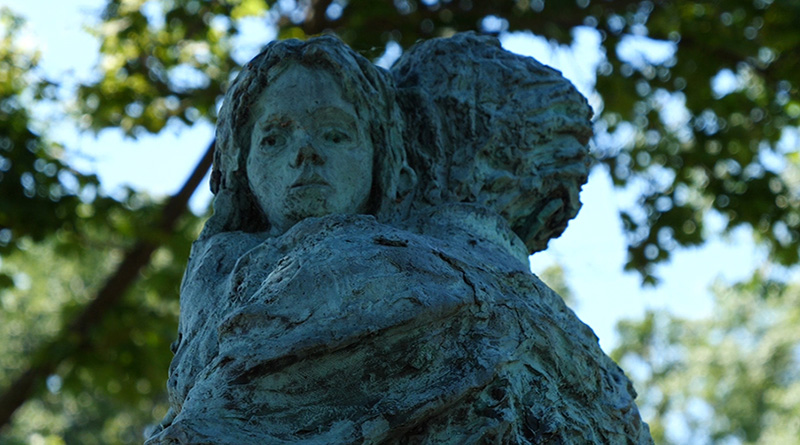 Alex de Waal’s, “Commemorating Starvation in the 21st Century”, Address given at Quinnipiac University on October 11, 2018

The first American memorial to the 1845-51 famine in Ireland, was designed by the sculptor Maurice Harron and erected on Cambridge Common in 1997. It shows two adults, each holding a child, parting from one another. The plinth has the words ‘Never again should a people starve in a world of plenty.’

Notice the importance of that indefinite article: ‘a people’.

On that word, hinges much. It signals famine as a collective, national experience, as opposed to hunger as a generic manifestation of poverty. In doing so it also identifies the community that has the authority to narrate its meaning today—a community brought together by common descent from the survivors of that famine.
The figures also indicate the importance of migration and parting—linking the experience of the Irish in Ireland, to the Irish in New England.
It intimates that the famine should be seen as a wrong inflicted, not just a wrong suffered. But the notion that the Irish not only starved, but that they were starved by others, is at best a faint suggestion, and one easily missed.

Memorials and commemorations identify an event, those who are affected by it and—by the process whereby they are designed and built—those who are entitled to define it. They open up the scope for reshaping the meaning of the event and its memory, for the future.

In this lecture, my main contention is that famine memorials have, up to now, focused on starvation in its intransitive sense—as an outcome or an experience. They have not explored how to commemorate starvation in its transitive sense, as something that people do to one another. A memorial or commemoration that tried to evoke starvation as an act—a criminal act no less—would of necessity relate not only to the victims and survivors, but also to the perpetrators, their accomplices, and bystanders. This is a demanding but necessary shift in purpose today, because famine is returning.