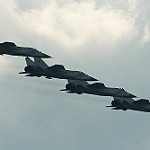 By Polina Beliakova and Sam Perlo-Freeman

Corruption in the Russian Defense Sector emerged out of research from our program on Corruption and the Global Arms Trade.  Click the link for the full report.

Today, Russia is the world’s fourth largest military spender and second largest arms exporter. Their arms industry is probably the third largest in the world, after the USA and China. The Russian arms industry, despite its current strength, must be viewed within the legacy of the USSR. The current Russian state inherited a significantly wounded, but still powerful system of arms production and export. However, along with an aging industrial infrastructure and global relations with importing countries, Russian leaders were endowed with an arms industry rife with corruption that pre-dated the fall of the USSR and metastasized in the chaotic years that followed. Today, corruption still constitutes a significant problem facing the Russian arms industry. This report discusses publicly available information on corruption in the Russian defense sector, especially the arms industry, identifying key cases of corruption that have become visible in recent years, in particular since 2008, when Russia’s current set of military reforms, and major rearmament drive, began.