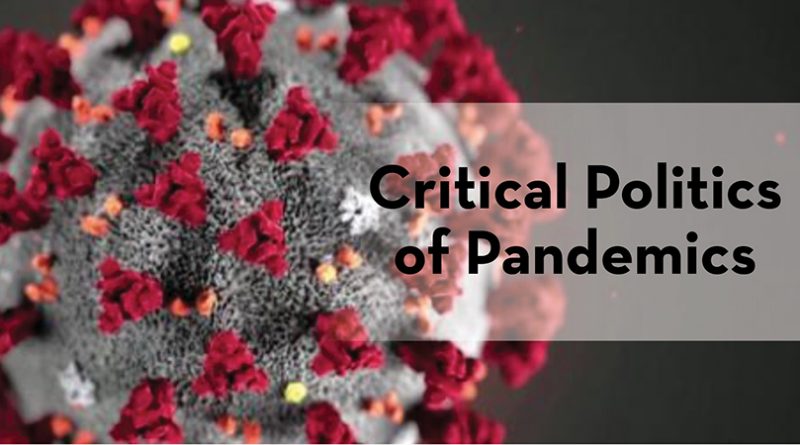 WPF is dedicated to critical political thinking during the COVID-19 emergency.

The most important moment to think critically is when there appears to be the best reason for acting without hesitation. At the moment of crisis shock, when the epidemic curve is at its steepest and when lives are in danger, when scientific experts insist that the evidence requires that we obey certain commands, and detestable politicians sow confusion for the most nefarious motives—that is the moment to think most carefully. At this moment in the COVID-19 pandemic, some things are clear: the rules of responsible hygiene and personal risk reduction should be followed. But we should scrutinize the motives, interests, assumptions, and tricks of language that accompany such commonsense moralities. Small, apparently imperceptible differences in how we set our compass today, can cause us to make landfall on a very different shore to that we had expected.

We welcome practical, political, sociological, philosophical, and artistic reflections and analyses of our current predicament.

Beginning in early April 2020, a group of Tufts University-affiliated volunteers began work with the World Peace Foundation to track COVID 19 in places of detention. The group includes graduate students from Fletcher and the Medical School, undergraduates, alumni and faculty. We are tracking information about the spread of the virus within prisons, jails, immigration detention centers, and juvenile facilities in the states of Massachusetts, New York, Michigan, Illinois, Louisiana, California, and Washington. While we focus on the United States, we also include some limited reporting on other countries.

This memo summarises some of what is known about epidemic disease and governance in Africa based on past experience, and poses questions concerning COVID-19. The principal research resources include the Commission on HIV/AIDS and Governance in Africa and the HIV/AIDS, Security and Governance Initiative. In this respect it supplements recent surveys on the issue by Crisis Group and the Carnegie Endowment. There have also been extremely alarmist predictions such as that reported from the Quai d’Orsay, that the epidemic will cause African states to collapse, necessitating international interventions

New technologies for remote programming have enabled aid agencies to reach crisis-affected populations, but at a cost: they rarely contribute to an understanding of the political and economic processes that result in some groups controlling resources and that make others vulnerable.  Remote working as the preferred aid option also changes how aid workers perceive realities on the ground, with the danger of losing sight of local knowledge, priorities and critiques.  Building on recent research on food assistance in Somalia and Sudan, this blog draws out three key lessons from experience of remote programming to address this issue.

At the helm of the WHO today, Tedros should not forget the philosophy of public health that brought him to who he is. The Ethiopian Ministry of Health under the EPRDF won international plaudits for its professionalism and efficiency: a model of a well-run bureaucracy that could deliver results far in excess of most of its peers across the developing the world. But those successes were built upon doctrines of community-based public health, forged in the hardships of war by a guerrilla front that knew its survival depended on the trust of the people, so that it had no alternative but to deliver on effective, community-based health.

There is a saying among epidemiologists: “If you’ve seen one pandemic, you’ve seen one pandemic.” Echoing this trade wisdom in an interview two weeks ago, Bruce Aylward, the assistant director of the World Health Organization (WHO), pointed out that each new pandemic follows its own logic, and those who rely on past experiences to draw conclusions for public health will make mistakes. With each new pandemic it is tempting to scour history books for parallels and lessons learned. But as many have stressed, the wisdom to be gained is often greatly exaggerated.

The largest population of detained people in the world resides in the United States. The geographic dispersion and variations of detention sites in the US work to hide the visibility of this population. If all these people lived in one place, let’s call it ‘Detentionville,’ it would form a city of around 2.3 million people, roughly the size of Houston, TX, Chicago, IL, or Paris, France. […] Whether the goal is to minimize coronavirus transmission across society, to protect detained people who are at heightened risk, or to improve the criminal justice system, we need to learn both to see the larger contours of Detentionville and the extreme variations within it. It is simultaneously national and local. While the affects of detention are not borne equally by all, the pandemic reveals that we all live near Detentionville.

Every epidemic is different; government responses are usually the same regardless. Many governments apply what they think are the “lessons learned” from a previous pandemic to a new pandemic. Experts on pandemics think this is an error. A global pandemic unfolds in different ways in different countries, but governments usually adopt a standardized set of interventions regardless of their differences. One doctrine is useful in all situations: “know your epidemic, act on its politics.” This was learned the hard way.

Don’t expect the coronavirus epidemic in the US to bring down President Trump
Alex de Waal, The Conversation on March 18, 2020

The Trump administration’s mishandling of the coronavirus crisis has been widely condemned by health experts. But if the administration’s bungling proves costly to Trump in the November election, it will be an exception to the historical rule that epidemics haven’t led to political unrest or governments being voted out of office.Some kinds of health crises do have political consequences: Hunger has toppled governments. From the French revolution to the Arab Spring, food shortages have routinely caused riots and occasionally sparked revolutions. In the case of starvation, political cause and personal result are intuitively clear to those suffering: My family has gone hungry because the government has failed to ensure there’s enough food.

Can There Be A Democratic Public Health? From HIV/AIDS to COVID-19
Alex de Waal, African Arguments, March 19, 2020

As we are re-learning with the coronavirus pandemic, the outbreak and global spread of a novel disease, which has neither vaccine nor proven cure, causes panic. More precisely, it causes political leaders and communities to resort to behaviours that intensify confusion and anxiety. Meanwhile, despite expert assurances to the contrary, public health ‘best practices’ are at best well-informed projections with the uncertainty factors on mute. At worst they can be superstitions.

Episode 16: Bracing for the Post-pandemic Storm

Alex de Waal joins Alan Boswell, Senior Analyst for South Sudan, to discuss the international system’s ability to respond to the new crisis in Africa and the value of community-led strategies to help blunt the impact.

A domestic turn: Interview with Adrienne Klein on COVID-19 in NYC

AIDS and Power: Why there is no political crisis, Zed Books, 2011