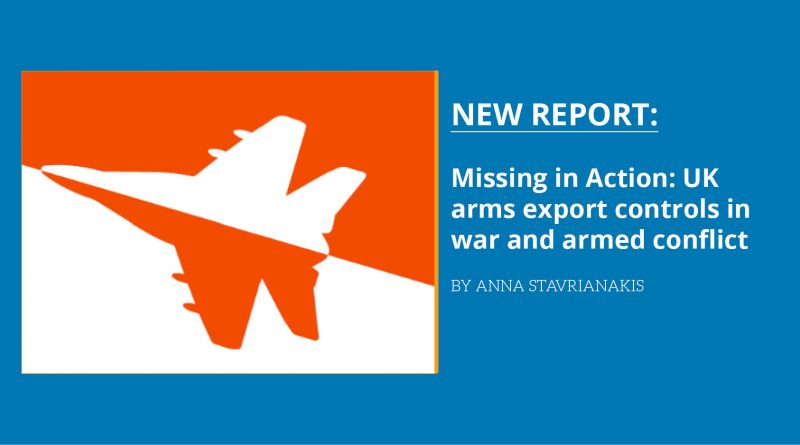 The Report finds that despite over twenty years of controls that include commitments not to aggravate conflict, adversely affect regional stability or contribute to violations of human rights or international humanitarian law, the outbreak of war or conflict has little or no restraining effect on UK arms exports, even where violations of human rights and humanitarian law are documented. The UK has participated in wars, transferred weapons to its allies and partners involved in those wars, and supplied weapons to states involved in wars, and continued to do so well after violations become known. Such exports are typical of UK export policy, not the exception to it. Exports to countries involved in war are among the UK’s largest and longest-standing arms customers.

Hosted by Campaign Against the Arms Trade (CAAT)

This report is part of the research program “Defense Industries, Foreign Policy and Armed Conflict” funded in part by the Carnegie Corporation of New York and is carried out in partnership with the OpenSecrets. It asks: why, despite robust regulation mechanisms in key exporting countries and international monitoring efforts, has the global arms trade proven remarkably resistant to effective controls – with direct enabling consequences on conflict situations?

The UK’s commitments to conflict prevention and the protection of human rights and international humanitarian law in its arms export controls are now over twenty years old. In this time, successive governments have routinely claimed that the UK has one of the most robust arms export control regimes in the world. Despite these obligations and the very public commitments to them, the outbreak of war or conflict has had little or no restraining effect on UK arms exports, even where violations of human rights and humanitarian law are documented.

To explore this disjuncture, this report examines UK export patterns in the last two decades and assesses four cases of arms exports to protagonists in wars that are illustrative of UK policy: to India and Pakistan in relation to Kashmir; to the Sri Lankan armed forces in the civil war; to Israel in relation to Occupied Palestinian Territory; and to the Saudi-led coalition in the war in Yemen.

The cases illustrate the ways in which arms export controls do not restrict transfers. Rather than being proactively engaged to prevent the harms set out in government policy, export controls are primarily mobilised by the state to manage controversy once criticism emerges from civil society and Parliament. Risk assessments not only fail to take past patterns into account or develop preventive orientations to likely future scenarios, but the control regime is routinely deployed as a means of deflecting calls for restraint. Overall, export controls serve a primarily legitimising function in an attempt to mollify parliamentary opposition, NGO and media criticism and domestic public opinion, and to signal good international citizenship in the face of ongoing exports to conflict zones in violation of international humanitarian and human rights law. The mantra that the UK has one of the most robust control regimes in the world is not a plausible description of the realities of UK export policy. Debate about arms export controls needs to be reframed as part of a wider conversation about the drivers and effects of UK foreign policy.

The misuse of UK-supplied weapons is a routine feature of wars involving UK customers. This includes weapons supplied before the advent of the licensing regime, prior to the outbreak of war and in between cycles of violence, as well as newer weapons, parts and components supplied during conflict. The UK supplies weapons to states involved in often decades-long conflicts (in which the British state has itself in many instances historically and currently been central) that experience cycles of violence. This is in addition to the UK’s own involvement in illegal wars using its own domestically produced and imported weapons.

Arms export licensing practice takes a very narrow interpretation of risk, operating as if neither the past nor the future exist. Risk assessments treat each round of violence as new and a blank slate. Ceasefires or other de-escalations are interpreted to mean that there is no clear risk of misuse, and thus no reason to deny licences, which allows recipients to replenish their armouries for use in later assaults and rounds of violence.

Self-serving reviews of licensing process (but not policy) take place when controversy is generated. These reviews are mobilised to validate government policy and facilitate ongoing exports rather than restrict them. Tokenistic refusals or revocations of licences occasionally take place at a late stage, but only when violence escalates to extreme levels and external pressure mounts.

The UK’s licensing criteria have politically and legally ambiguous effects, that ultimately serve to facilitate rather than restrict exports. On the one hand, the criteria allow critics to draw attention to the misuse of weapons, giving them a framework and a language with which to try to hold the government to account, including via legal challenges. On the other, the criteria are mobilised by government as a mantra to deflect criticism and to close down debate and scrutiny. The government points to the existence of regulations to argue that its policy is sound, regardless of the publicly available evidence to the contrary, and invokes the flexibility of case-by-case application of the criteria as a means to reject more substantive control measures.

The Committees on Arms Export Controls have played a politically fluctuating role in accountability. Scrutiny is a key responsibility of Parliament and can generate transparency and accountability for arms export decisions. Occasionally, the CAEC has generated robust criticism of government policy and practice. However, its energy, expertise and competence have varied over time. It suffers from structural limitations as a super-committee rather than a standing Select Committee: an indirect membership constituted via four component committees; cumbersome quoracy rules; and the lack of a dedicated staff or a paid Chair elected by all MPs. These weaknesses are a major obstacle to effective democratic scrutiny and control of arms exports.

There is a mutually supportive, entrenched and organic relationship between the UK state’s geopolitical ambitions and the interests of UK-based industry. There is a reciprocally convenient fiction of separation between the two, in which companies hide behind the policymaking and licensing role of the state, and the state refuses to comment on company practice under the guise of commercial confidentiality. The arms industry plays a crucial yet hidden role in ongoing state support for exports, but this support is not reducible to industry interests. Rather, the combination of industry influence and the state’s strategic and geopolitical interest in trying to remain a major military power generate a congruence of interests and assumptions about the benefits of arms exports.

What should be done?

The key issue is the absence of political will to address the economic, political and social costs of UK policy on arms sales.

Anna Stavrianakis is Professor in International Relations at the University of Sussex, UK. She is the author (most recently) of “Controlling weapons circulation in a postcolonial militarised world“, and “Legitimizing Liberal Militarism: Politics, law and war in the Arms Trade Treaty“, both of which analyse contemporary multilateral arms transfer regulation; and of “Playing with words while Yemen burns” and “When ‘anxious scrutiny’ of arms exports facilitates humanitarian disaster“, which focus on UK arms export policy. She has worked with NGOs and campaign groups, and conducted interviews and participant observation with state officials, for over 15 years; and also a regular contributor to national media, writing for The Independent and The Guardian in the UK and engaging with journalists at international outlets.

This report is part of the WPF research program, Defense industries, Foreign Policies and Armed Conflict, funded in part by the Carnegie Corporation of New York and carried out in partnership with the OpenSecrets. It asks: why, despite robust regulation mechanisms in key exporting countries and international monitoring efforts, has the global arms trade proven remarkably resistant to effective controls – with direct enabling consequences on conflict situations?