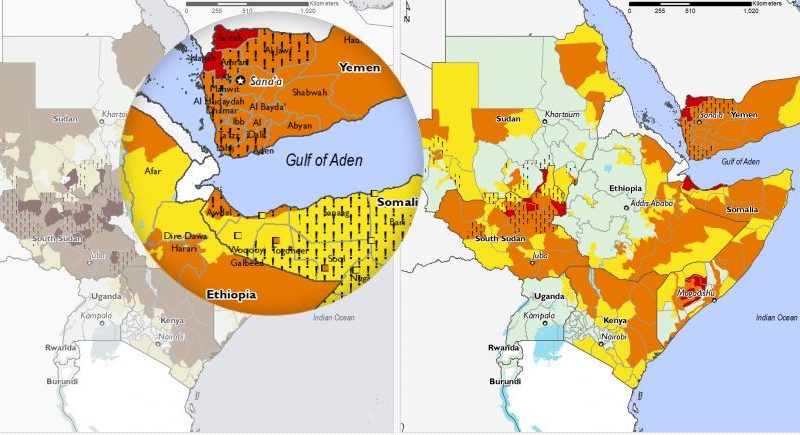 World Peace Foundation is pleased to announce the publication of a new Occasional Paper, “Famine Early Warning and Information Systems in Conflict Settings: Challenges for Humanitarian Metrics and Response,” by Dan Maxwell, the Henry J. Leir Professor in Food Security at the Friedman School of Nutrition, Science, and Policy.  The paper is part of the Conflict Research Programme, of which WPF is a partner. Below is the Introduction:

Famine early warning systems began with support from international donors in the aftermath of the Sahelian famine of the 1970s—though in some ways trace their origins back as far as the Indian Famine Codes of the nineteenth century. Attention to the growing number of people caught in crises characterized by extreme and often protracted levels of food insecurity, malnutrition, and mortality is increasing.  The information systems that track these conditions and inform humanitarian decision-making have expanded substantially in the past two decades and in many cases have reached a degree of unprecedented sophistication. Advances in remote sensing technology, cell phone utilization, and even artificial intelligence have all been incorporated into what used to be limited to tracking a handful of production, market, and rainfall indicators supplemented by methodologically diverse rapid assessments.

These systems—and the analytical outputs they produce—are intended to warn national authorities, donors, and humanitarian agencies about impending food security crises and also to enable the impartial allocation of humanitarian response resources in crises. Systems currently are split between (1) those that focus on providing timely information to decision-makers about the coming three to six months to enable timely mitigation and response measures (the actual early warning function) and (2) those that provide information about the severity of the crisis as it is occurring (the resource allocation function). Thus while only one function of these systems is really about “early warning” per se, they are often referred to generically as “early warning systems” (EWS).

These information systems are therefore important for producing empirical evidence that a famine is occurring, or has occurred, which will be important for any attempt to hold any parties to account for the existence of famine in the first place—which is critical to the question of “starvation crimes” as defined by de Waal.[1] However, while these systems can be predictive, and are the means of classifying the severity of crises, they are weak with regard to linking specific causes to the occurrence of famine or crises of lesser severity.[1] They are especially weak with regard to conflict analysis, or linking specific conflict acts to specific famine or crisis-related outcomes. And the analysis of the intent of conflict actors—which presumably would be critical to the prosecution of starvation crimes—is unheard of in either the analytical protocols or outputs of these systems. Causal analysis in EWS is slowly being improved but distinct risks are involved in taking on questions about intent.

These systems have become increasingly sophisticated in the past decade, but they still tend to be based on several assumptions that are important to understand. This paper briefly describes existing famine or food security early warning systems and outlines some of the assumptions on which they are based—both in theory and in practice. Then it gives four brief case studies of recent famine or “famine-like” events and pieces together the formal analysis process with an attempt to reconstruct events on the ground from a conflict analysis perspective—highlighting the extent to which the formal famine analysis did or did not deal with conflict analyses and the political kryptonite around the discussion of “intent.” It closes with a summary of gaps in the current system and an assessment of the risks of trying to address those gaps through famine EWS or alternative means.

[1] In fact, despite the fact that the word garners so much attention, the term “famine” may be counter-productive in a discussion about “starvation crimes” because famine, as it is currently defined, may be too restrictive a term. So the term needs to be understood broadly in this context, not just in the narrow technical definition. To put it bluntly, “starvation crimes” can occur even if there is no “famine” per se (by current definitions).