The global arms trade is suffused with corruption, imperils the vulnerable, and makes us all less safe. Yet arms merchants and their government supporters can turn to a set of time-honed and well-packaged arguments to justify the status quo. Through examining the myths that sustain the arms industry, a panel convened by the World Peace Foundation, moderated by Bridget Conley and including Paul Holden, Sam Perlo-Freeman, and Sarah Detzner debunked these myths while launching the book, “Indefensible: Seven Myths that Sustain the Global Arms Trade.” 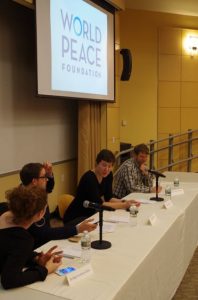 Paul Holden led the audience through the case of a South African arms deal, demonstrating how the myths of the arms trade, including how higher defense spending equals increased security and how national security requires blanket secrecy, support a system that makes countries less democratic and less secure. “There was a misguided belief that the arms deal would stimulate the economy,” Holden said, but the myth that arms industries create jobs was not realized in South Africa. Instead, Holden said, the money spent on the deal could have paid for HIV/AIDS treatment for all infected in South Africa for over thirty years, or how the same amount could have helped house every homeless person in the country by 2017. The South African deal, Holden argued, is not unique; it is a prime example of how arms deals work around the world. The real threats, he contends, such as crime, poverty, and unemployment, were made worse by the arms deal in South Africa. Using public funds to make major expenditures in the name of imagined threats is a trend all around the world.

Sarah Detzner built on Paul’s comments and demonstrated how corruption works its way into arms deals in the U.S. context, both explicitly and implicitly. She discussed the revolving door whereby government officials and members of the military may represent the government one day and then switch to corporate side, and end up negotiating a deal with someone who may well have previously been their subordinate within government. With the Trump administration promising to drastically increase defense spending, she stated, there will be many more opportunities for corruption creep and arms deals made in line with this troubling status quo. Detzner also highlighted an issue of time horizon that facilitates arms deals: many who make the deals benefit in the short-term and the negative impacts and costs aren’t experienced until much later, sometimes thirty years or more, which incentivizes agreements that aren’t always in the public interest.

What are some other factors that make the global arms trade so prone to corruption? Sam Perlo-Freeman said that both buyers and sellers play a role in perpetuating the secrecy surrounding the arms trade and its close relationship to military matters. “The veil of national security, that it’s special and sacred, applies in western countries, but also in countries ruled by the military,” Perlo-Freeman said. The incentives and particular way that corruption works is different in the United States versus elsewhere, he said, because the US government invests so much on military equipment, manufacturers produce high quality material and can often compete on price and quality in the global market. But European companies don’t have access to markets that are large enough to sustain the production of large weapons like planes and submarines. They have strong incentives to keep their industry afloat by selling these weapons abroad to countries, and are often willing to pay bribes to sweeten a deal. “Governments, if not actively complicit,” Perlo-Freeman said, “are at least willing to overlook the bribes.” The myth that countries must maintain a weapons arsenal to maintain national security closes this self-perpetuating circle, making bribes and corruption acceptable and ubiquitous.

All panelists expanded on the buyer-seller relationship. In what Holden called a “race to the bottom,” he noted that the unfortunate reality is that if countries can’t buy arms from one company, it’s very easy to find another willing seller. The issue of “blow-back” should also be at the forefront of sellers’ minds; while some arms deals might benefit those in power in the short-term, the timeline issue highlighted by Detzner also presents a challenge when selling arms to volatile or unstable political regimes. Those deals can create dangerous problems in the long-term if those arms fall into the control of enemies rather than allies, or if allies turn into enemies over time.

The US and UK are in privileged positions and can limit the ability of corrupt regimes to expand their bases by refusing to sell to particularly unsavory buyers. As purchasing weapons from the US and UK provides countries not only with arms, but also political relationships– a “global protection racket,” and buyers will continue to demand weapons developed in these countries, this position represents one inroad for active change to the status quo.

However, all panelists agreed that the sacred status of national security remains a challenge to possible change. Trying to create political space for enforcement officials to “fight back” and make offenses and corruption more punishable, will have to be done country by country and will the support of civil society in both producing and purchasing countries — a challenging, but necessary battle to combat corruption and impunity.

Holden closed the discussion on a hopeful note. “Regulatory changes can make a difference over time,” he said. Citing the work of Transparency International in India, he said that corruption has been reduced, and the cost of corruption has been made much higher. Perlo-Freeman also discussed the importance of Foreign Corruption Practices Act, and reminded the audience that the American public must remain vigilant and active with organizations that can enforce the FCPA’s principles regardless of the lax attitude of the Trump Administration towards this legislation. The power of the Internet, increased transparency, and books like “Indefensible” can expose these myths and help the pubic become more educated on such an important, and often opaque issue.