Alex de Waal opened the evening by welcoming Amb. Chergui to the podium, and congratulating him on the historic decision taken by African political leaders at the just concluded AU Summit to impose a sustainable mode of financing the core functions of the AU. WPF African Peace Missions program director, Mulugeta Gebrehiwot then presented Amb. Chergui with the Report. 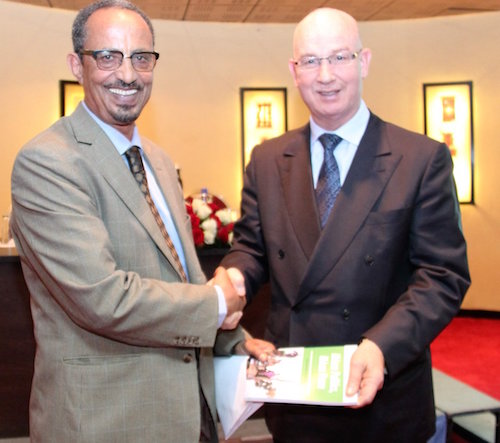 In his remarks, Amb Chergui thanked the WPF for the report and noted that it offered an opportunity to look at the broader picture beyond the day to day work of managing crises, to see that in many respects, the bug picture is encouraging. The African Union has made a major impact on the reduction in coup d’états and improving efforts to mediate conflicts. However, he also noted that conflicts are rising today in Africa, citing the pressing case of South Sudan as example.

Amb. Chergui was delighted that the Report offered such a comprehensive and detailed review of AU peace missions. Three key findings stood out to him. First, was the position of the AU at the center of peace and security efforts in Africa. Second, he noted the Report’s findings that women make an enormously positive impact on peace missions, as mediators and peacekeepers. He noted that female peacekeepers are important not only through their ability to engage with communities, but also their involvement in such peace missions correlates with reductions in sexual exploitation and other harms to women in the local community. Third, he welcomed and emphasized the particular role of a politics of peace in Africa.

Mulugeta Gebrehiwot outlined the core findings and recommendations of the Report. He noted that the report is the most extensive review of the African Union’s peace missions ever conducted. It is based on detailed case studies and cross-cutting research, and draws on consultations with leading experts, peacekeepers, and mediators. It covers African peace and security norms and mechanisms, including conflict prevention, conflict mediation, political missions and the spectrum of military peace operations. 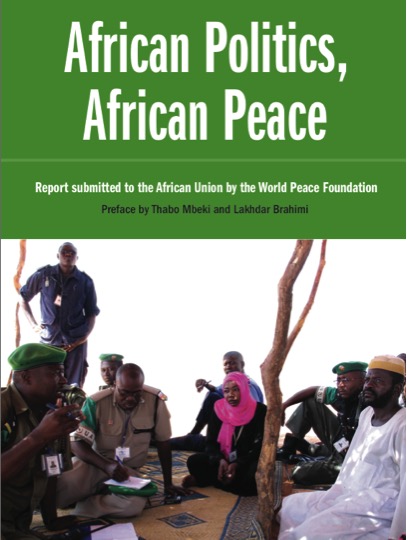 The research covered peace support operations (PSOs) include peacekeeping operations, stabilization/enforcement missions, mediation and political missions. It delved into case studies and cross cutting issues, such as trends in African conflicts; trends in African mediation; the process of mandating PSOs; prevention of mass atrocities and protection of civilians; gender issues as related to PSOs; and security sector reform. Further, it addressed key architectural issues: the African Peace and Security Architecture (APSA); the AU Peace and Security Council, and Unconstitutional Changes in Government; panels of experts; the African Standby Force and doctrinal issues. The report also made extensive use of consultations with African and international experts, force commanders and Troop Contributing Countries.

This research suggests that Africa is at a turning point. Significant progress has been made since the AU was founded in 2002, but there are troubling trends that require new focus. Conflict is again rising in Africa. In the decade after the African Union was founded in 2000, Africa’s concerted efforts helped reduce the level of armed conflict to an all-time low. But today conflicts are again increasing. The reasons include weak democracy, contested government transitions, inter-state contestation, and violent extremism. There is a risk of abandoning the very mechanisms, principles and practices that founded the AU and produced real gains for peace. Today’s emergent emphasis on hard-security approaches to peace and security challenges results in AU responses that are reactive to crisis situations, overly dependent on military interventions, and threaten to embroil the organization in unwinnable armed conflicts. Further, a predominantly militarized response to crises is financially unsustainable.

What is the answer?: The Primacy of the Political. The AU needs to focus its efforts in the areas where it has comparative strength.

The AU should more fully implement its principles and norms and practices of collective security unique to the continent if it wishes to retain ownership of Africa’s peacebuilding agenda.

The AU possesses unique peace making capacity; it should expand its investments in the area of conflict prevention and mediation. Cross-case research finds that African-led mediation with international support is the most effective form of peacemaking. AU mechanisms such as the Peace and Security Council and High-Level Panels are valuable mechanisms and should be invested in. When the AU engages with neighboring states, it has the ability to overcome divisions and rivalries among those states and instead promote common involvement in peace making. The AU should prioritize funding for its core activities and peace making efforts rather than expensive military operations, and should understand that there can be no ownership without financial responsibility.

The AU structures that form the APSA are working, but can be enhanced to better position the AU to engage with regional and international actors. Hence, it recommends an APSA Plus to include:

Gebrehiwot concluded with one of the Report’s key insights: as the AU develops more capacities, it should not lose sight of the fact that Africa’s proven advantage is in the politics of conflict prevention and mediation.

Solomon Dersso then discussed how this report differs from others, many of which focus on the instruments of peace and security. “African Politics, African Peace” dedicates considerable space to the primacy of the political as an expression of the underlying philosophy of African peace and security. This approach draws attention to the requirement that peace be sought clearly in relation to the fundamentals of a philosophy of peace that is cornerstone of the AU’s contributions.

At heart, he argued, the primacy of the political must be taken as an intellectual exercise: defining the problems correctly so that they can best be resolved. With this in mind, we can better understand the meaning of the phrase “African solutions to African problems”, which should not be taken as a promise that the AU would resolve all problems on the continent. Rather, Dersso continued, it represents an exercise in defining the nature of problems and articulating the norms and principles that guide policy responses. Foregrounding response within the political means the design and approach of all peacemaking efforts, even military interventions, are guided by this core philosophical approach to peace and security challenges.

The Report also details the achievements of the AU, as well as gaps. Among these gaps is the extra-African dimensions of some conflicts: the AU needs a “neighborhood policy” as well as policies internal to the African continent. Dersso emphasized the need for North Africa and the Horn Africa, in particular, to recommit to forging collective positions and protect the shared spaces where the AU’s interests engage with other regional actors, especially the Mediterranean and Red Sea-Gulf of Aden.