Below you can find data on the COVID-19 outbreak in Massachusetts detention facilities for the first three months of the COVID-19 epidemic: March, April, May 2020. These facilities include: two Federal Bureau of Prisons facilities (Devens in Ayer and Community Resources for Justice, Inc., a contracted residential re-entry center in Boston); sixteen facilities operated by the Massachusetts Department of Correction (DOC); County-level information about jails and ICE detainees; and youth in juvenile centers.

By May 31, 2020, 8 incarcerated people had died in state prisons, one in Essex County jail and 1 at the federal facility, FMC Devens, due to illness as result of COVID-19. Five people  died in MTC Bridgewater: on April 2nd, April 3rd, April 5th, April 14th, and 22nd. Three people  died at MCI Shirley: on April 16th, April 22nd and May 15th. A person in Essex County jail died on April 30. Darrell Underhill, who was incarcerated at FMC Devens, died on May 4.  While our study focuses on March – May 2020, we note that Robert Herndon, incarcerated at FMC Devens, died on June 2.

The first coronavirus case in detention was reported on March 20, 2020 at MTC-Bridgewater, when a prisoner tested positive. From March 20th – April 4th, information about COVID-19 in Massachusetts’ places of detention emerged through only a few sources, primarily journalists; the Federal Bureau of Prisons covers the facility at Devens. Sheriffs across the Commonwealth adopted very different approaches to public information about conditions in jails: Middlesex published regular updates on its website, whereas others that did not make any COVID-19 crisis announcements on their sites (including updates about ending visits, as in Bristol).

On March 24, 2020, the Massachusetts Association of Criminal Defense Lawyers, the Public Defender Agency of Massachusetts and the American Civil Liberties Union (ACLU) of Massachusetts filed an emergency petition asking the Massachusetts Supreme Judicial Court (SJC) to use its powers to reduce the number of people incarcerated in Massachusetts jails, prisons, and houses of corrections. Seven district attorneys filed opposition to the petition (including those from Plymouth, Norfolk, Cape and Islands, Essex, Hampden, and Bristol), while four supported it (Middlesex, Berkshire, Suffolk and Northwestern).

The SJC asked the DOC and Sheriffs to provide information about whether prisoners come within 6 feet of each other in spaces for sleeping, eating and recreation. Their responses:

The responses from 14 sheriffs varied. Many said that prisoners are not sleeping within 6 feet of each other — measuring based on a “head to toe” sleeping arrangement in which a prisoner on a top bunk sleeps facing one way while a prisoner on a bottom bunk sleeps facing the other direction. This arrangement is suggested in guidelines from the U.S. Centers for Disease Control and Prevention. Many said they are staggering meal and recreation times to promote social distancing.

The SJC decision was announced on April 3, 2020: it provided guidelines for releasing some prisoners who have not yet been convicted, and those who are being held for technical parole or probation violations. However, it did not impact those who had been sentenced. It also appointed Brien O’Connor, an attorney with Ropes and Gray, as a “special master,” an attorney who will work with both sides to expedite hearings. Sheriffs and the DOC were also mandated to file regular reports with the “special master” about COVID-19 in their facilities and regarding the number of prisoners released.

As a result of the above decision, the ACLU began receiving and publishing information from the Special Master related to testing, positive cases, releases for each county, and overall for the DOC. This information is available on their website and can be downloaded.

Starting on April 13th, the DOC began providing facility-level information on prisoners. Information about staff was added on April 15th. Neither prisoner nor staff deaths are included in the data provided through the Special Master.

The research provided below helps fill the gap in the early weeks of the outbreak, drawing on information available in the public sphere, which, we recognize, may be incomplete. The below charts provide an overview of publicly reported information about incarcerated people and staff testing positive from March 20 until April 13th and 14th (respectively), when facility-level data became available through the ACLU web portal.

The Federal facility, FMC Devens, is a combination of two facilities – FPC Devens (minimum security camp) and FMC Devens (low security prison and Federal Medical Center) – collectively the complex is referred to as FMC Devens and it has a total population of 1,011 incarcerated people.

As of April 23, 2020, the Federal Bureau of Prisons reported 1 incarcerated person had tested positive at FMC Devens. On May 7th, the BOP announced that Darrel Underhill, who was sentenced to 121 months in prison, died on May 4th.  Infections spiked in mid-May.

A second federal facility, the Community Resources for Justice, Inc., a contracted residential re-entry center in Boston reported 6 incarcerated people have tested positive, marking no change since mid-April (May 5, 2020). The Center has beds for 95 people (76 male and 19 female).

BOP does not provide any information about testing available.

The below charts document the early phase of the outbreak before the MA Supreme Judicial Court decision mandated the DOC and Sheriffs to produce regularly updated information (see above for more about when and how information became available). The latest updates can be found at the ACLU managed site: “Tracking COVID-19 in Massachusetts Prisons and Jails.”

The below charts are from the WPF/TUPIT team, and reflect the early period of the outbreak, largely before DOC provided facility-level information. This research relied on media reports covering the period between March 20th and April 13th. Later periods when DOC started providing information by facility is available here: “Tracking COVID-19 in Massachusetts Prisons and Jails.

On April 10, the Prisoners Legal Services of Massachusetts revealed that the infection rate is nearly 10 times that of the overall state prison population, with 17 prisoners, or 7.8 percent of the facility’s population, infected.

Starting in late April there was big increase in testing at these three facilities, followed by another surge in positive test results, charted below.

Over the course of several weeks in May, DOC began large-scale testing at additional facilities that had not reported significant outbreaks.  The below tables reflect numbers of incarcerated people and staff tested, as well as those whose tests were positive, between April and May, 2020, as reported through the SJC Special Master reports and presented by the ACLU COVID-19 data tracker.

The latest updates can be found at the ACLU managed site: “Tracking COVID-19 in Massachusetts Prisons and Jails.”

Massachusetts is divided into 14 counties, most of which have a jail or house of correction facility. ICE detainees are held at: Bristol County House, Plymouth County Correctional, Suffolk House, Franklin County House, Worcester House of Corrections, and Middleton House of Correction. Below is information related to the early phase of the outbreak, the latest updates can be found at the ACLU managed site: “Tracking COVID-19 in Massachusetts Prisons and Jails”.

On April 30, a prisoner from Essex County jail died of COVID-19 related illness.

The below data combines information revealed through media reporting and with that available through the ACLU tracker. Four hotspots emerged early on in: Middlesex, Essex, Hampshire, and Suffolk.

The below Table 1.1 details the when staff and detainees first reported as testing positive and updates the totals by May 4, 2020. 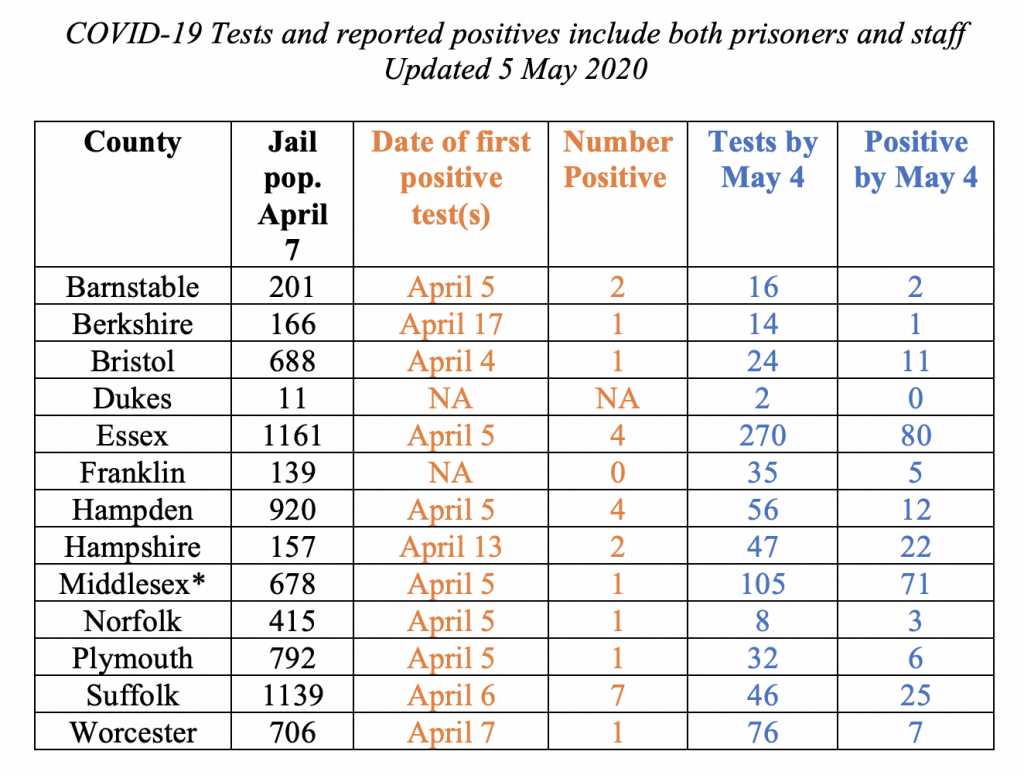 Starting on May 8th, some counties began providing facility-level information. The below graphs (1.7 and 1.8) present this data through June 8, 2020, and an overview of change over time at three hardest-hit facilities.

The MA Department of Youth Services (DYS) is not reporting within SJC decision mechanisms, but it provided information to our research team upon request. In their communication, the Department noted several actions they have undertaken, a full list of which can be found on their website.

Graph 1.9 reflects conditions on April 17, May 4, and June 1, 2020 (these are the dates when we requested and received updates from the Department).

Please note: The above is not a complete list of juvenile facilities int he state. If a county is not listed, it is because no positive tests were reported.

Student researchers affiliated with the Tufts University Prison Initiative at Tisch College who contributed to this report include: Roshni Babal, Caroline Blanton and Matthew Siegel.