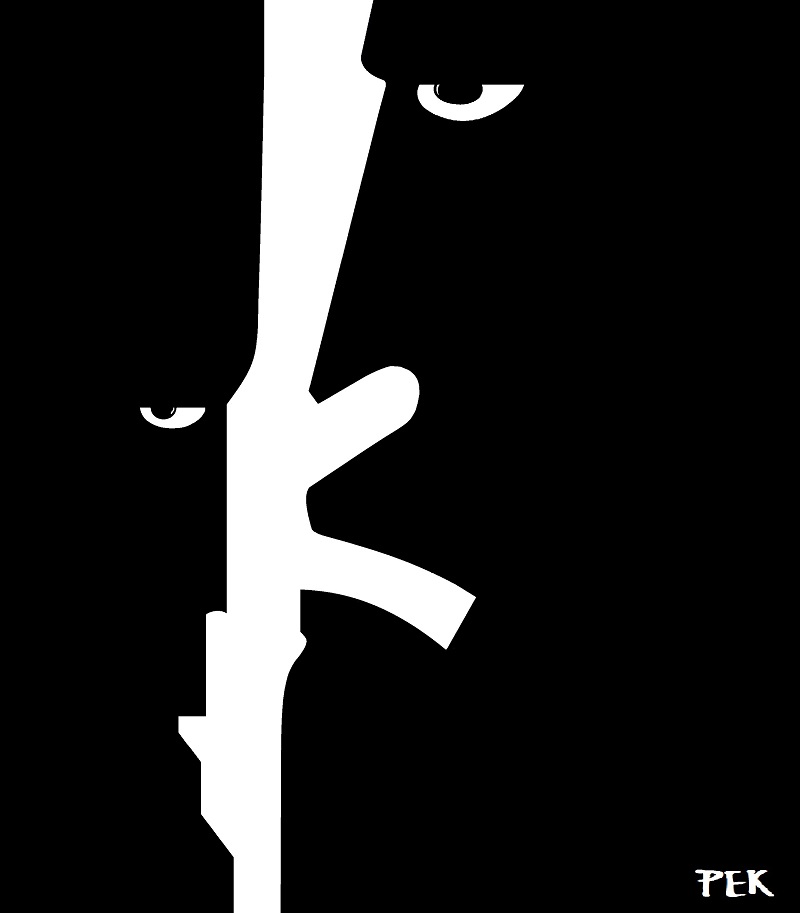 The decisions to build, sell or buy weapons systems often have little to do with defending the nation. Other factors at play include claims that weapons systems generate economic benefits (see Myth 4); and pure corruption—that is, the kickbacks and access to public funds are the rationale for the deal, and the weaponry is a ruse.

One example: Lockheed Martin’s new albatross, the F35 Join Strike Fighter aircraft which demonstrates how the U.S. military-industrial-congressional complex — as Eisenhower almost called it — is at its most inventive when finding new ways to waste ever more money.

The F-35 is the most expensive aircraft program in history, costing $1.5 trillion and rising, while suffering a stream of technical problems that have delayed it by years. Many commentators argue that it doesn’t even match the capabilities of other earlier, cheaper fighters. What it does do is provide vast revenues for the arms industry, and with production of the plane having a presence in every Congressional district, it is virtually guaranteed support regardless of its failings, as representatives vie to bring jobs and funding to their districts. It doesn’t create nearly as many jobs per $billion as other potential areas of spending, but if the jobs aren’t enough to keep Congress onside, the millions of dollars of campaign contributions by the big F-35 contractors to members of Congress generally is.

Very often, the motives for arms deals are even more blatant. Saudi princes were allegedly paid hundreds of millions in kickbacks in relation to the Al Yamamah series of arms purchases from BAE Systems coming from a UK-Saudi government deal. French warship and submarine maker DCN has sold ships of dubious quality and military value to Taiwan, Malaysia, Pakistan and Saudi Arabia among others in which key decision-makers have received massive bribes. Corruption can affect other areas of military spending as well; Iraq, Nigeria and South Sudan have all had problems with armies of ‘ghost soldiers’, whereby senior commanders received salaries on behalf of soldiers that did not exist. Such low-level forms of military corruption, including ghost soldiers, skimmed-off salaries, fake supply contracts, stolen equipment funds, illegal selling-off of military equipment for private gain, can have devastating effects on the effectiveness of armed forces, and can contribute to severe human rights abuses. Ukraine is estimated to have lost $32 billion worth of military assets in the 1990s through such theft. This and massive corruption in procurement left Ukrainian troops without basic equipment when fighting Russian-backed rebels in 2014.

With an estimated lifetime cost of $1.5trn to produce and maintain, the Lockheed Martin F-35 stealth fighter is the most expensive weapons program in history.[1] Moreover, every year that the F-35 has been in production the cost has gone up due to technical problems. For this enormous sum, the US will receive 2,457 stealth fighter-bombers for use by the Air Force, the Navy, and the Marine Corps.[2]

The problems with the F-35, however, are legion. Beyond spiraling costs, constant changes to requirements since the program’s beginning in the late 1980s have led to huge delays and technical problems. The demand for an ‘all-singing, all-dancing’ plane has sometimes led to contradictory requirements, resulting in a plane that arguably offers little if any improvement on existing models. The noted military commentator Winslow Wheeler, who has advised both Republican and Democratic senators, has summarized the performance thus:

‘A virtual flying piano, the F-35 lacks the F-16’s agility in the air-to-air mode and the F-15E’s range and payload in the bombing mode, and it can’t even begin to compare to the A-10 at low-altitude close air support for troops engaged in combat. Worse yet, it won’t be able to get into the air as often to perform any mission—or just as importantly, to train pilots—because its complexity prolongs maintenance and limits availability.’[3]

The F-35 has two things going for it: an enormous budget to lobby decision makers and a ready list of all the jobs that it has created. Lockheed Martin’s splashy website is quick to emphasize the latter, promising that the F-35 delivers ‘tens of thousands of high-paying, high quality jobs to American workers across the country’.[4] Below this is a useful map showing ‘how the F-35 contributes to your state’s economy’.[5] In total, Lockheed Martin claims that the F-35 program sustains 129,000 direct and indirect jobs across forty-five US states.[6]

But these figures may be a considerable over-estimate. According to leading commentator Bill Hartung, a figure in the region of 50,000 – 60,000 jobs is more plausible, based on standard accounting methods. And while Lockheed claims that forty-five states will receive economic benefits, the top five states will account for nearly 70% of all jobs sustained by the project. Eleven states will each house less than a dozen F-35 jobs.[7]

If these figures are less than impressive, have a look at Lockheed’s budget for influencing. According to David Axe, an investigative blogger, Lockheed Martin spends at least $15m a year on its lobbying efforts, and is able to direct considerable campaign contributions to decisive players.[8] Four of the most important F-35 contractors – Lockheed Martin, BAE Systems, Northrop Grumman and United Technologies – have made campaign contributions totaling $11.1m in 2011/2012 and 2013/2014.[9] Of these donations, a substantial portion were directed towards members of the F-35 caucus, a thirty-nine-member group within Congress that has long-supported the jet project. The biggest overall recipient of donations was the chair of the House Armed Services Committee, Representative Howard P. ‘Buck’ McKeon, who received $218,650.[10] The thirty-nine members of the F-35 caucus have received a combined total of $1.9m from F-35 contractors, including a number of smaller companies in the production line.[11]

Perhaps this is why the F-35, despite all of its problems, continues to receive massive budgetary support. Indeed, the Pentagon’s 2017 budget request includes $10.5bn just for the F-35 (equal to the annual budget of the Environmental Protection Agency). This amounts to 5.7% of the entire procurement and research and development budgets of the Pentagon, which total $184bn in Fiscal Year 2017.[12]

And all to buy a ‘virtual flying piano’.

The F35: Better Ways to Spend a Trillion Dollars was produced by the WPF in 2015 to highlight the numerous challenges and mismanagement of funds involved in the production of Lockheed Martin’s F35 fighter plane. Resources include background to the F35 and a video script with links to research that informs claims made in the video.

In 1993, the body of a naval officer washed ashore in the small town of Suao, on the eastern edge of the island of Taiwan. The resulting investigation led to the unraveling of a corruption scandal which continued for 19 years and resulted in hundreds of millions of dollars in restitution. Yin Ching-fen, the officer found at sea, was head of the Taiwanese (Republic of China’s) naval procurement directorate, and had been collecting evidence of irregularities in the purchase of six Lafayette-class frigates from France. According to that evidence, the French company which produced the Lafayette frigates had bribed Taiwanese Navy officials to set standards that benefitted their offering. While the navy initially cited drowning as his cause of death, an external coroner confirmed that he had been murdered.

The USD 2.8 billion Lafayette deal was signed in 1991 and was mired in controversy from the start. Taiwanese defense plans called for a force of small frigates, but a plan to purchases these from South Korea was dropped in favor of a package put together by DCNS, the French state-owned shipyard, and its partner, Thomson-CSF (later Thales), for the larger Lafayette. Originally, the ships were to be built in Taiwan by China Shipbuilding Corporation, but in March 1993 this policy was discarded in favor of a direct purchase from DCNS.

In the course of the investigation by prosecutors in France and Taiwan, both sides found reasons for alarm. Taiwanese complaints focused on the inadequacy of the vessels and the inflation of their cost relative to a similar package offered to Singapore. In France, the deal became entangled in the larger scandal over retro-commissions, kick-backs paid by arms sales clients used for funding political activities in France.

The 2000 presidential election brought to power President Chen Shui-bian, who had been a vocal critic of the Lafayette affair, and who tasked the Control Yuan, an official government accountability body, with investigating the case. This body severely criticized the navy over the way the deal was conducted and in March 2002 revealed that the price of the deal had been inflated from 10 billion Francs to 15 billion (USD 2 billion – although the contract was eventually USD 2.8 billion). Its final report into the deal, in May 2002, confirmed that commissions were paid and cast light on the nature and purposes of the corruption. The investigators found that Hau Pei-tsun, premier from 1990 to 1993, and senior naval officers had taken procurement decisions that conflicted with official naval plans and undermined the power of President Lee Teng-hui by keeping him out of the decision-making process. According to the report, navy leadership knew that the Lafayette conformed less well to requirements than the South Korean option, and consequently changed requirements to advantage the French option.

Former French Foreign Minister Roland Dumas eventually admitted in a book and TV interviews that the French government had, through the partially state-owned oil company Elf Aquitaine, paid USD 500 million in bribes to secure the frigate deal, of which USD 400 million went to KMT Chair James Soong (who likely acted as a conduit for the money to other bribe recipients), and USD 100 million to the Chinese government to sooth Chinese objections.

French investigations relating to the deal first began in the 1990s following the eruption of the Elf Aquitaine scandal in 1994.  Former Foreign Minister Roland Dumas was investigated in 1997 in relation to claims that he had received bribes from Elf in relation to the frigate deal to overcome his opposition to arms sales to Taiwan. Dumas was subsequently convicted in May 2002 for embezzlement from the public treasury, but acquitted on appeal in 2003. The French investigation into potential retro-commissions stemming from the Taiwanese deal was called off in 2008 after prosecutors failed to establish that bribes had been paid back into the French political system.

The International Court of Arbitration at the International Chamber of Commerce ruled in 2010 that Thomson CSF – now Thales – had breached an anti-corruption clause in its contract with Taiwan for the frigates. It was ordered to pay damages of EUR 630 million, equal to the amount of the bribes plus interest. Thales and the French government agreed to pay after the ruling was confirmed on appeal in 2011, with the amount split 72.5% from the French government on behalf of DCN, and 27.5% from Thales. Taiwan’s government instituted a further lawsuit in 2011 for USD 98 million against DCNS over additional alleged kickbacks.

The only person convicted in Taiwan over the deal was navy Captain Kuo Li-heng, who was convicted of receiving bribes from Andrew Wang. Six other senior naval officers were charged with corruption, but acquitted. Kuo’s brother was convicted on a money-laundering charge related to the corruption.

Taiwan is still trying to recover stolen assets in Swiss bank accounts linked to the deal, in particular in the accounts linked to the agent Andrew Wang, a representative of Thomson-CSF in Taiwan. A total of USD 730 million in accounts linked to Wang and Kuo has been frozen by the Swiss authorities. Wang fled Taiwan shortly after Yin’s death in 1993, and was indicted in absentia for the murder in 2000. He died in the UK in 2015, still a free man, aged 87.