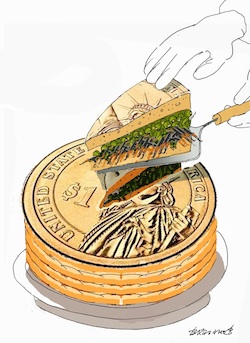 Corruption is a feature of the arms trade the world over, developed and developing countries alike. Former finance expert Joe Roeber, after studying vast numbers of documents, estimated in 2005 that around 40% of bribes paid in international trade deals worldwide were related to the arms trade. Several factors make the arms trade ‘hard-wired for corruption’, as Roeber put it: the huge value of the deals, offering personal enrichment for bribe-takers and make-or-break affairs for arms sellers; the technical complexity of deals, allowing bribe-payers to target just a few individuals who understand the process; and the veil of secrecy and impunity accorded to matters of national security, among others.

UK arms company BAE Systems devoted considerable effort to securing arms deals with the help of bribes over the years, with a shell-company, Red Diamond Trading, established in the British Virgin Islands tax haven to pay out vast commissions to middlemen in arms deals, who would in turn pay bribes to key decision-makers. Arms deals in which Red Diamond was involved, and where strong evidence of corruption emerged, include those with Saudi Arabia, South Africa, Tanzania, Austria, the Czech Republic and Hungary. Thus developed and developing producing and purchasing countries alike engaged in corrupt practices.

German engineering company Ferrostaal, with substantial involvement in the maritime arms industry, is also a serial briber. Internal documents leaked in 2010 showed suspect payments worth hundreds of millions of dollars made over the previous decade relating to deals the world over. Major arms sales in which corrupt payments were allegedly made include German submarine sales to Greece and Portugal.

The arms trade can also corrupt political systems and democratic practices. Of particular concern is the ‘revolving door’ that exists between the military and the arms industry, with senior military officers in the US and UK (among others) routinely taking positions in the industry on retirement, placing them in a strong position to influence decisions by their former employer. In turn, arms industry personnel are frequently seconded to defence ministries, and are included in key decision-making bodies on defence policy. Arms companies such as Lockeed Martin, Raytheon, Booz Allen Hamilton and SAIC are even involved in producing the US Presidential Daily Briefing!

BAE Systems is the third largest defense manufacturer in the world, with 40% of its turnover earned supplying the US defense establishment.[1] The company was investigated for nearly a decade, by the UK’s Serious Fraud Office (SFO) and the US Department of Justice, amongst others, for alleged widespread corruption in its sale of defense equipment to a range of countries including Saudi Arabia, the Czech Republic, Hungary, Tanzania and South Africa. In 2008, the Serious Fraud Office supplied an affidavit to South African authorities, which were also investigating BAE Systems for alleged bribery and corruption in the hugely controversial purchase of Gripen and Hawk jets. The affidavit, and the attached evidence that the SFO had uncovered, was eye-opening.

The SFO found a document from 1995 in which BAE outlined a series of strategies to make their use of ‘marketing advisers’ and ‘consultants’ more opaque—something the company needed to do, according to the document, because of increased attention being paid by the US Department of Justice to BAE’s ‘marketing activities’ in Chile, which had allegedly included payments to Chile’s notorious dictator Augusto Pinochet.[2] To do so, in 1998 BAE Systems formed a company named Red Diamond Trading in the British Virgin Islands, a well-known tax and secrecy haven. Red Diamond Trading, in turn, was operated by a company called Headquarters Marketing, the unit within BAE Systems that had been engaging in ‘marketing activities’ in Chile.[3] BAE would make payments via its online banking services in London to a raft of advisors—an almost industrialized system of securing influence. 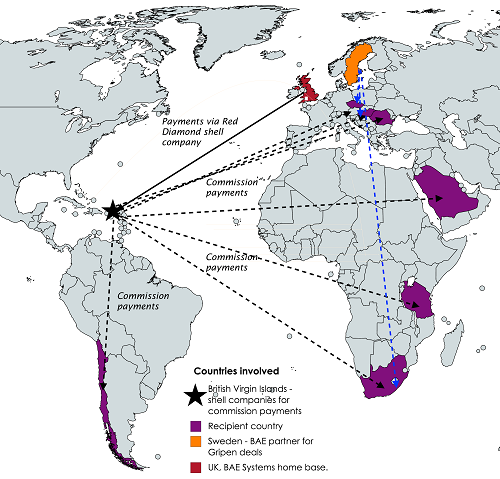 Through Red Diamond Trading, BAE Systems entered into contracts with ‘covert advisors’ (BAE Systems contracted with ‘overt advisors’ directly) whose identity was to remain secret. Gary Murphy, a senior investigator with the SFO, was clear why he believed this system had been established: ‘I suspect a primary reason behind the inception of Red Diamond was to ensure that corrupt payments could be made and that it would be more difficult for law enforcement agencies to penetrate the system.’[4]

BAE Systems made use of Red Diamond extensively. In the South African contract alone, SFO investigators tracked roughly £115m in payments to ‘covert advisors’either via Red Diamond or other offshore routes.[5] One of these ‘covert advisors’ was one Fana Hlongwane, who, at the time the purchase from BAE was being negotiated, served as the special advisor to the then minister of defense, Joe Modise. Modise, in turn, had been instrumental in getting BAE selected as the supplier for Hawk and Gripen aircraft, which he achieved, in the case of the Hawk, by going so far as to instruct evaluators to ignore the fact that they cost more than double the price of their nearest competitor. It later emerged that Modise had secured shares in a company that was due to receive considerable business through BAE’s promised offset program.

In 2010 and 2011, BAE Systems entered into plea bargain agreements with the US Department of Justice and US Department of State, respectively. In the DoJ plea bargain, BAE Systems agreed to a fine of up to $450m in return for being allowed to plead guilty to lesser charges. Nevertheless, the information that formed the basis for the settlement, known as a Statement of Offence, confirmed just how frequently

BAE Systems made use of the Red Diamond network.[6] BAE admitted that it paid, from 2001 onwards, £135m and $14m to ‘marketing advisors’ in a host of countries. Most importantly, BAE Systems confirmed that it ‘made payments to certain advisors through offshore shell companies even though in certain situations there was a high probability that part of the payments would be used in order to ensure BAES was favored in the foreign governments’ decisions regarding the sale of

defense articles’.[7] In its settlement with the Department of State, which included a fine of $79m, BAE admitted that it had made over 1,000 payments to ‘unauthorized brokers’, while retaining at least 300 brokers and advisors on its books from the late 1990s to 2007.[8]

[2] G. Murphy, Affidavit submitted as Annexure JDP-SW12 in the High Court of South Africa (Transvaal Provincial Division) in the matter of Ex Parte the National Director of Public Prosecutions (applicant) In Re: An Application for Issue of Search Warrants in Terms of Section 29(5) and 29(6) of the National Prosecuting Authority Act, No. 32 of 1998, as amended, 2008.

[8] “Proposed Charging Letter re: Investigation of BAE Systems plc Regarding Violations of the Arms Export Control Act and the International Traffic in Arms Regulations,” May 2011, accessed 30 May 2017, www.pmddtc.state.gov/compliance/consent_agreements/baes.html.