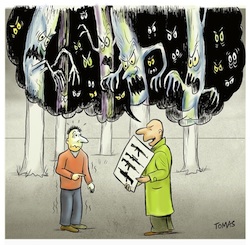 “The world is a more dangerous place than ever”.

This, or similar formulations, have been heard from the mouths of politicians, military figures, security pundits, and especially the arms industry, for a very long time. Surely now is not a good time to challenge the global arms business when we need to protect ourselves against the myriad threats we face?

Over the past few years, and especially with the calamitous events of 2016, the world has become more dangerous. But in fact, up to around 2011, the global trend in the number of armed conflicts and the number of people killed in armed conflicts had been falling steadily for decades. Despite a recent upturn, largely due to the war in Syria, the level is still well below that of the Cold War. Meanwhile the frequency of famines and mass atrocities remains at an all-time low.

Both for psychological and political reasons, we are prone to ‘threat inflation’. Fear of terrorism is high, but in fact a US resident is more likely to be killed by drowning in the bath than in a terrorist attack. Threat inflation is also frequently used for political ends – the perception of Iraq’s Saddam Hussein as an insane megalomaniac bent on killing Americans, in league with Al Qaeda, and possessing weapons of mass destruction was carefully cultivated by politicans, amplified by the media, and used to justify the disastrous invasion of Iraq. This picture was false on every count. Excessive reaction to perceived threats indeed tends to be self-fulfilling, creating a more dangerous world. The election of Donald Trump is a prime example.

It is indeed more necessary now than ever to challenge the fear-mongering that justifies the global arms business, massive militarization and securitization, and the resort to military force—by Russia, Saudi Arabia and many others as well as the US and its allies—that brings about so much destruction and perpetuates a cycle of instability, fear and violence.

A few years after the millennium, the world was at its most peaceable in recorded history. Nonetheless, a 2006 Gallup poll revealed that 76% of Americans believed that the world was, in that year, more dangerous than it had been any time in the recent past.

What might explain this? Some reasons lie in the psychology of threat perception. Threats that are new and unknown will figure more highly than those that are familiar – even if the latter are objectively greater. Threats that are incalculable or somehow alien will be seen as their worst possible manifestations. We are irrationally scared of sharks. Events that are on the TV news will be more salient than those lacking such attention.

Other reasons lie in the deliberate or casual misrepresentation by politicians. Playing to people’s fears – including exaggerating those fears – is the oldest trick in the politician’s playbook. This is where the arms business enters, as an accessory to this trick.

And there can be no doubt that the terrorist crime of 11 September 2001 generated deep fears among western (and especially American) publics. Not only were civilian airliners turned into weapons of conspicuous destruction, but the subsequent anthrax scare drew attention to the dangers of chemical and biological warfare agents in the hands of non-state actors bent solely on devastation. The fear that Iraqi dictator Saddam Hussein possessed nuclear weapons ready to launch on a hair trigger evoked still deeper fears. The ideologies of al-Qaida militants, and more recently Isis, are so alien and demonic that people are deeply afraid that the worst may transpire. 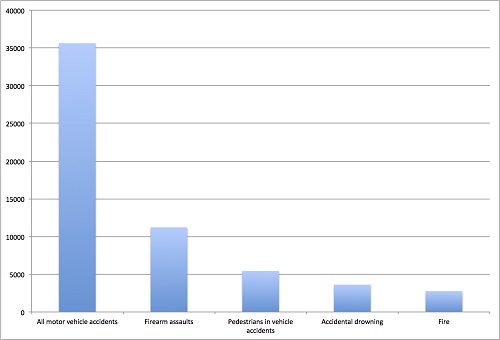 Fortunately, those fears are massively disproportionate to the actual threats. In 2013, for example, [a Gallup poll showed that] 11% of US citizens were very worried, and 29% somewhat worried, that someone in their family would be a victim of terrorism. But, that same year, the US government confirmed that only 16 American citizens (not including soldiers) had been killed as a result of terrorism worldwide. Over the period 1995-2015, including the 9/11 attacks, an average of 170 Americans were killed worldwide by terrorism every year. That’s well under half the number of people killed every year drowning in a bathtub, which was between 424 and 438 over 2009-11, and somewhat less than the numbers killed by being bitten, struck, crushed, stung or poisoned by an animal (a little over 200 per year). And even this may be an overestimate. In recent years (from 2006-15), the average number of Americans killed in terrorism worldwide was 18—less than the numbers killed in the US by lightning. Toddlers, using weapons found in their own homes, have killed more Americans than terrorists in recent years.[1] 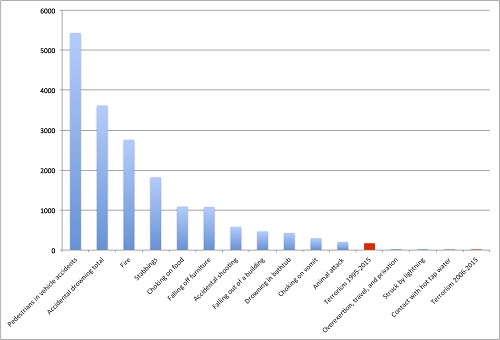 One thing that happened in the aftermath of the trauma of 9/11 was “threat inflation”: political leaders and pundits inflated the perils that America was facing. Threat inflation is remarkably easy to do. The difference between popular fears and realities is well known to domestic politicians and policemen. A 2011 Gallup poll found that 68% of Americans think crime is on the rise. In fact, between 1993 and 2012, the violent crime rate in the United States dropped by just under 50%.

Nowhere is threat inflation more pronounced than in relation to defence and security issues and the global arms industry. Many scholars point to how particular players – the defence industry, the military, like-minded leaders and a pliant commercial press – can collude to create magnified perceptions of threat to justify unpopular military endeavours, pursue particular foreign policy ideologies and divert massive financial resources to the industries and individuals who will be paid to defuse the threat.

During the early stages of the cold war, for example, American policymakers and military leaders loudly worried about first a “bomber gap” and then a “missile gap”, claiming that the USSR was massively outpacing US production of bombers and nuclear missiles. In reality, by September 1961, the USSR had only four ICBMs at its disposal compared to 100 for the US, “less than one half of one percent of the missiles expected by US intelligence”, as Stephen Van Evera points out. More recently, Saddam Hussein turned out not to possess weapons of mass destruction after all. Alleged threats from North Korea, Iran, and China, are likewise inflated, despite the US’s overwhelming military advantage, to keep the money rolling into the military and the arms industry.

The responses to these imaginary or exaggerated threats, ironically, tend in turn to increase the very threats they were supposed to prevent. The blowback from the 2003 invasion of Iraq is turning out to be extremely serious. Where do we see the most significant uptick in armed violence over the last decade? The places are almost all those affected by the Iraqi civil war and attendant militant extremism (Iraq itself, Syria), or by attempts to win the “war on terror” primarily by military means (Afghanistan, Somalia, Yemen), or the fallout of western military intervention (Libya and the Sahara). And Russian president Vladimir Putin explains and justifies his bellicose posture, including his actions in Ukraine and involvement in Syria, as no more than exercising the right of national security to override international norms, as the US invoked in Iraq.

Take the conflict that has almost single-handedly pushed up current conflict deaths to early 1990s levels – the devastating civil war in Syria. While the conflict in that country is driven by multiple factors, there is no doubt that the level of violence in that country is a direct result of decades of arms transfers to the region. The spectacular success of Isis in Syria and more widely has in large part been facilitated by the fact that they have been able to seize enormous quantities of arms, particularly in Iraq.

In short, almost everywhere we see a recently escalating conflict, the fingerprints of the global arms business and its political fellow travelers can be found, both in provoking conflict and in profiting from it. To repeat: we do not argue that these wars are deliberately engineered by arms manufacturers and traders. But the entanglement of the arms business in the political decisions generating today’s wars demands our scrutiny. We cannot take the claims of the defence and security lobbies at face value.