Mass Starvation: The History and Future of Famine

The world almost conquered famine. Until the 1980s, this scourge killed ten million people every decade, but by early 2000s mass starvation had all-but-disappeared. Today, famines are resurgent, driven by war, blockade, hostility to humanitarian principles, and a volatile global economy.

In Mass Starvation, world-renowned expert on humanitarian crisis and response Alex de Waal, provides an authoritative history of modern famines: their causes, dimensions, and why they ended. He analyzes starvation as a crime, and breaks new ground in examining forced starvation as an instrument of genocide and war. Refuting the enduring but erroneous view that attributes famine to overpopulation and natural disaster, he shows how political decision or political failing is an essential element in every famine, while the spread of democracy and human rights, and the ending of wars, were major factors in the near-ending of this devastating phenomenon.

Hard-hitting and deeply informed, Mass Starvation explains why man-made famine and the political decisions that could end it for good must once again become a top priority for the international community.

The global arms trade is suffused with corruption, imperils the vulnerable and makes us all less safe.  Yet arms merchants and their government supporters can turn to a set of time-honed and well-packaged arguments to justify the status quo. Each one of the claims is either deeply questionable or simply untrue. The arms business needs to be undressed. Then, we will find its claims are indefensible; nothing more than myths. The WPF’s Project Indefensible debunks the seven core myths that the arms industry uses to deflect criticism and explains what can be done. It includes an interactive website and book,Indefensible: Seven Myths that Sustain the Global Arms Trade. The project was sponsored by WPF, and the book’s author is Paul Holden, our colleague at Corruption Watch, along with collaborators Bridget Conley-Zilkic, Alex de Waal, Sarah Detzner, John Paul Dunne, Andrew Feinstein, William Hartung, Lora Lumpe, Nic Marsh, Sam Perlo-Freeman, Hennie Van Vuuren, and Leah Wawro.

Purchase as a Kindle ebook or paperback in the UK through Zed Books, or in the Unites States from University of Chicago Press.

Given the brutality of mass atrocities, it is no wonder that one question dominates research and policy: what can we, who are not at risk, do to prevent such violence and hasten endings? But this question skips a more fundamental question for understanding the trajectory of violence: how do mass atrocities actually end?

This volume presents an analysis of the processes, decisions, and factors that help bring about the end of mass atrocities. It includes qualitatively rich case studies from Burundi, Guatemala, Indonesia, Sudan, Bosnia, and Iraq, drawing patterns from wide-ranging data. As such, it offers a much needed correction to the popular “salvation narrative” framing mass atrocity in terms of good and evil. The nuanced, multidisciplinary approach followed here represents not only an essential tool for scholars, but also an important step forward in improving civilian protection.

The Real Politics of the Horn of Africa: Money, War and the Business of Power

Alex de Waal’s latest book (Polity Press, September 2015) draws on his thirty-year career in Sudan, Ethiopia, Eritrea and Somalia, including experience as a participant in high-level peace talks, to provide a unique and compelling account of how these countries leaders run their governments, conduct their business, fight their wars and, occasionally, make peace.

De Waal shows how leaders operate on a business model, securing funds for their political budgets which they use to rent the provisional allegiances of army officers, militia commanders, tribal chiefs and party officials at the going rate. This political marketplace is eroding the institutions of government and reversing statebuilding and it is fueled in large part by oil exports, aid funds and western military assistance for counter-terrorism and peacekeeping.

To see the book lecture at the Ginn Library, The Fletcher School, Tufts University, click here.

Conflicts in Africa, Asia and Latin America have become a common focus of advocacy by Western celebrities and NGOs. This provocative volume delves into the realities of these efforts, which have often involved compromising on integrity in pursuit of profile and influence.Examining the methods used by Western advocates, how they relate to campaigns in the countries concerned, and their impact, expert authors evaluate the successes and failures of past advocacy campaigns and offer constructive criticism of current efforts. Taking in a range of high-profile case studies, including campaigns for democracy in Burma and Latin America, for the rights of Palestinians in Gaza, and opposing the Lord’s Resistance Army in Uganda, the authors challenge the assumptions set forth by advocacy organizations.

Advocacy in Conflict was developed from the 2013 World Peace Foundation Student Seminar, Western Advocacy in Conflict: Methods, Impacts and Ethics, and is edited by Alex de Waal, with Jennifer Ambrose, Casey Hogle, Trisha Taneja and Keren Yohannes with contributions from many of the seminar participants. The seminar briefing full text available as a PDF download.

Listen to an interview “The Is Hell” conducted with Alex de Waal about the book.

Purchase in the UK through Zed Books  or in the USA through the University of Chicago Press. 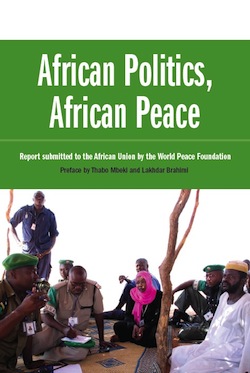 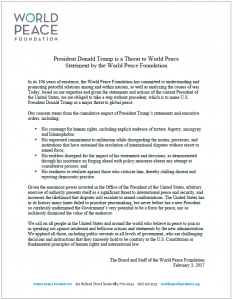 President Donald Trump is a Threat to World Peace

In its 106 years of existence, the World Peace Foundation has committed to understanding and
promoting peaceful relations among and within nations, as well as analyzing the causes of war.
Today, based on our expertise and given the statements and actions of the current President of
the United States, we are obliged to take a step without precedent, which is to name U.S.
President Donald Trump as a major threat to global peace.

Read the full statement, which details our concerns.

Our Statement on Ending Famine

Famine is an age-old scourge that almost disappeared in our lifetime. On the basis of our relevant scholarly and professional expertise, we, members of the faculty, staff and students of Tufts University, make the following declaration about the grave public ill that is famine, and our responsibility, as a university, a nation, and members of the international community, to end famine once and for all.  We invite you to join us in signing a statement on ending famine, which was drafted by a group of Tufts faculty members from The Fletcher School of Law and Diplomacy, the Friedman School of Nutrition Science and Policy and the School of Arts and Sciences, Tufts University. 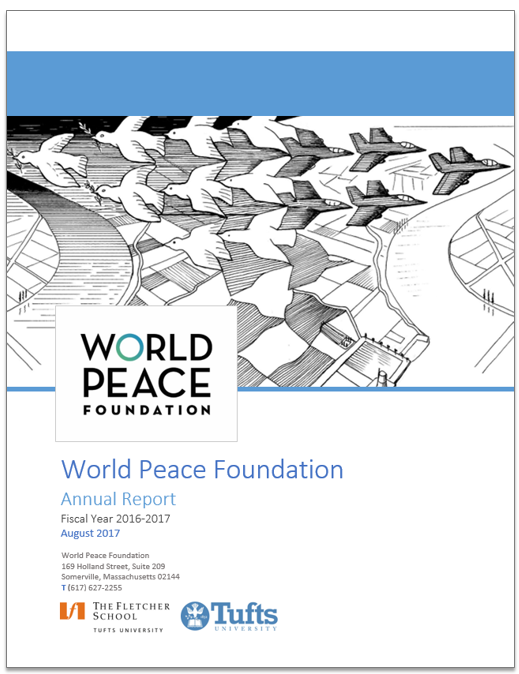 This has been a difficult year for world peace. While every recent year has faced serious setbacks in a general advance towards a less violent world, the last 12 months have marked a clear and significant shift towards a world order that is more bellicose, authoritarian and violently conflicted. This report begins with reflections on what this means for the WPF.

The purpose of the World Peace Foundation is ‘educating the people of all nations to a full knowledge of the waste and destructiveness of war and of preparation for war, its evil effects on present social conditions and on the well-being of future generations, and to promote international justice and the brotherhood of man, and generally by every practical means to promote peace and good will among all mankind.’

For publications by Dyan Mazurana as part of her WPF Fellowship, click here.