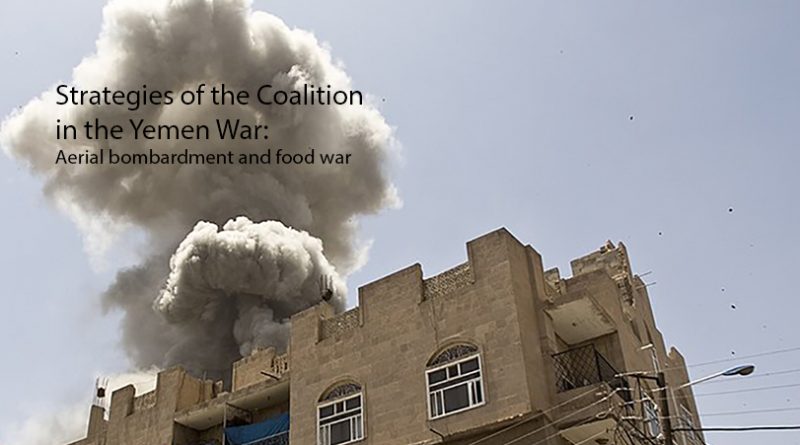 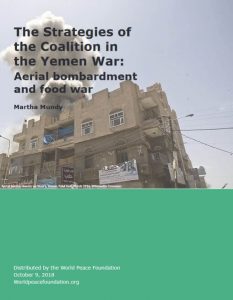 Martha Mundy’s report, “Strategies of the Coalition in the Yemen War“ (October 9, 2018) is distributed by the World Peace Foundation. The Report offers unique data and graphics documenting:

“This report gives an overview not available elsewhere of the impact of the Coalition bombing campaign on food production and distribution in rural Yemen and on fishing along the Red Sea coast. The timing of its release appears opportune. Press coverage of this forgotten war has increased; there is some diplomatic and political movement; and the report on human rights violations during the Yemen war, prepared under the aegis of the Group of Eminent Experts, has been submitted to the UN Human Rights Council in Geneva. Warnings of the risk of mass starvation echo ever more shrilly… It is high time that citizens, parliamentarians and civil organisations to do all they can to end a conflict now well into its fourth year. […]

If one places the damage to the resources of food producers (farmers, herders, and fishers) alongside the targeting of food processing, storage and transport in urban areas and the wider economic war, there is strong evidence that Coalition strategy has aimed to destroy food production and distribution in the areas under the control of Sanʿaʾ. As described above, from the autumn of 2016, economic war has compounded physical destruction to create a mass failure in basic livelihoods.

Deliberate destruction of family farming and artisanal fishing is a war crime. Yemen, Saudi Arabia, the UAE, the United Kingdom and France are signatories to the 1977 Protocol I additional to the Geneva Conventions, which gives the fullest statement in International Humanitarian Law on the protection of objects indispensable to the survival of the civilian population.”

A call to action:

“If the Coalition war in Yemen is not to mark the erasure of legal referent in war, other forces and institutions will need to call into question the blanket ‘legitimacy’ accorded the Coalition to date by the world’s highest legal body, the UN Security Council. If UN Security Council resolution 2417 (24 May 2018), condemning starvation of civilians in wartime, is to be meaningful, then it is necessary for the UNSC and its member states to halt such crimes in Yemen, to investigate them, and to call to account those responsible for perpetrating them.”

Maps and Figures from Strategies of the Coalition War in Yemen

Maps and Figures created by Martha Mundy and available in her report, “The Strategies of the Coalition in the Yemen War: Aerial bombardment and food war.” Distributed by the World Peace Foundation, October 2018.

New Report Documents “Strategies of the Coalition in the Yemen War”

Boston, MA – October 9, 2018 – The World Peace Foundation at The Fletcher School (Tufts University) has published a report by Professor Martha Mundy, “The Strategies of the Coalition in the Yemen War,” that provides comprehensive analysis of patterns of targeting civilian, agricultural and fishing sites by the Saudi Arabia-led coalition in the on-going Yemen war. The Coalition is backing the internationally recognized government of Abd-Rabbuh Mansour Hadi, in the war against the “Houthi rebels” – the “Salvation/Rescue Government” of Ansarallah and its allies based in Sana’a. The war has brought Yemen to the brink of famine, with an estimated 22 million people in need of food aid.

The report presents data collected by several organizations within Yemen: the civil society organization, the Yemen Data Project, Ministry of Agriculture and Irrigation (MAI), and the Ministry of Fish Wealth (MFW). Together, the data detail the overall levels of targeting civilian, military and unknown sites (2015 – 2018); the systematic targeting of agricultural areas including the character of the site, and the frequency and timeline of targeting (2015 – 2016). The Report also documents the killing of fishermen along the Yemeni Red Sea coast, destruction of boats and infrastructure required to support small-scale fishing (2015 – 2017) that otherwise could provide life-saving food for a civilian population on the brink of famine.

“The increased risk of famine globally today, after decades of decline, is a result of the pursuit of military objectives and political priorities without any regard to human suffering,” said Alex de Waal, Executive Director of the World Peace Foundation. “Today, starvation is being inflicted on people in South Sudan, northern Nigeria, Syria, and Yemen . Yemen poses a particularly acute challenge for the United States and United Kingdom, who are key allies of Saudi Arabia, which leads the Coalition, and supporters of a war effort that systematically and repeatedly flouts international law, destroys the national economy and devastates the civilian population.”

“If one places the damage to the resources of food producers (farmers, herders, and fishers) alongside the targeting of food processing, storage and transport in urban areas and the wider economic war,” Martha Mundy explains, “there is strong evidence that Coalition strategy has aimed to destroy food production and distribution in the areas under the control of Sanaʿaʾ.”

The timing of the Report’s release is opportune. Press coverage of this neglected war has recently increased; there is some diplomatic and political movement; and the report on human rights violations during the Yemen war, prepared under the aegis of the Group of Eminent Experts, has been submitted to the UN Human Rights Council in Geneva. Further, in May 2018, the United Nations Security Council affirmed that “starvation of civilians as a method of warfare may constitute a war crime” (UNSC Res. 2417).

This seminal report advances the World Peace Foundation’s mission to educate the world about the waste and destructiveness of war and to promote international peace.

Established by the publisher Edwin Ginn in 1910, the World Peace Foundation aims to “educate the people of all nations to a full knowledge of the waste and destructiveness of war and of preparation for war, its evil effects on present social conditions and on the wellbeing of future generations, and to promote international justice and the brotherhood of man, and generally by every practical means to promote peace and goodwill among all mankind.” As of 2011, the WPF is solely affiliated with Tufts University’s The Fletcher School.

Martha Mundy is Professor Emeritus of Anthropology at the London School of Economics and a founding member of the Thimar research collective (www.athimar.org ). She has carried out field and archival research in Yemen, Jordan, Syria and Lebanon and written on issues in the anthropology of law, the comparative sociology of agrarian systems, and the anthropology of kinship and family.

Alex de Waal
Alex de Waal is Executive Director of the World Peace Foundation and a Research Professor at The Fletcher School. Considered one of the foremost experts on famine, his scholarship and practice has also probed humanitarian crisis and response, human rights, the Horn of Africa, HIV/AIDS and governance in Africa, and conflict and peacebuilding. Professor de Waal received a D.Phil. from Oxford for his thesis on the 1984-1985 Darfur famine in Sudan. He worked for several Africa-focused human rights organizations, focusing on the Horn of Africa, and especially on avenues to peaceful resolution of the second Sudanese Civil War. He also researched the intersection of HIV/AIDS, poverty and governance, and initiated the Commission on HIV/AIDS and Governance in Africa. De Waal was a fellow at the Global Equity Initiative at Harvard (2004-2006), and Program Director at the Social Science Research Council. He was a member of the African Union mediation team for Darfur (2005-2006) and senior adviser to the African Union High-Level Implementation Panel for Sudan (2009-2012). He was on the list of Foreign Policy’s 100 most influential public intellectuals in 2008 and Atlantic Monthly’s 27 “brave thinkers” in 2009.