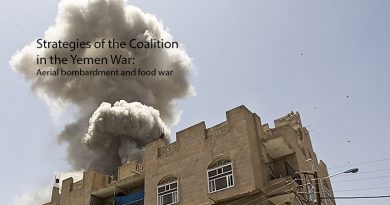 Discussing the impact of the Coalition bombing campaign on food production and distribution in Yemen.

“The Return of Famine?” Conference at Tufts University on May 4, 2018 The Crisis in Yemen: introduction by Greg Gottlieb,

Last week, a bombing raid in Yemen by the Saudi-led coalition seeking to restore the government of President Abd Rabbuh Mansur Hadi, struck a funeral, killing 140 civilians. This is the latest in a series of outrages, well-documented by Amnesty International, Human Rights Watch, the United Nations and others, whereby Saudi and allied forces have struck hospitals, schools, market-places and other civilian targets. Saudi-led bombing is believed to be responsible for the majority of civilian deaths in Yemen’s bloody civil war.

Only a few weeks after news broke that the Pentagon lost track of $500 million in arms transfers to Yemen,