In response to concerns about COVID-19, as of March 10, 2020, Tufts University has made significant, immediate changes to campus life, as a preventative measure. All WPF events scheduled for the remainder of the Spring semester 2020 have been canceled. 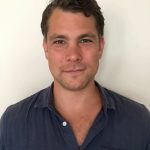 Elliott Prasse-Freeman is Assistant Professor in the Department of Sociology/Anthropology at the National University of Singapore. He received his doctorate in anthropology from Yale University. He is working on a book focusing on Burmese subaltern political thought as adduced from an extended ethnography of activism and contentious politics in the country’s semi-authoritarian setting. Dr Prasse-Freeman is also currently studying Rohingya political subjectivity amidst dislocation and mass violence.

This lecture examines the physical and symbolic violence waged by the Myanmar state on the Rohingya people, exploring in particular the effects of that violence on the (re)production of Rohingya identity. It analyzes the violence as foregrounding the ethnic identity and use of the ethnonym Rohingya, increasing the intensity of some people’s affiliations to it while driving away others, even as the name’s importance makes its content and contours an object of contention and cooptation. I identify internal cleavages in Rohingya identification emerging along four specific axes: First, elites appealing to the narrow, racialized demands of the exclusionary Myanmar state are engaging in a project of strategic essentialism that, when combined with average Rohingyas’ nostalgic imaginaries of life before the military-state’s assaults, constructs a reified Rohingya that does not reflect the various modes of differentiation – particularly along lines of geographic origin, class, and religiosity – that have long existed for Rohingya in Myanmar. Second, the narrowing of Rohingya-ness is absorbed and reproduced by humanitarian institutions’ knowledge machines. Third, variations in Rohingya expression have been accentuated by repeated dispossessions endured by groups of Rohingya over the past four decades, leading to further differentiation in the identity. Fourth, and perhaps most importantly, both those expelled from Myanmar and those under assault within the country have faced the challenges of securing their individual/family survival while also preserving their collective ethno-cultural identity; identification with the Rohingya ethnonym varies to the extent that individuals have different perceptions regarding how such identification may either protect or imperil them. Taken together, Rohingya identity hence often becomes an impossible object as the very same violent crucible in which Rohingya have been forged is also that which extrudes them. They are simultaneously interpellated as Rohingya by the violence that denies that name and even compels them to reject it. Through multi-sited ethnography in Cox’s Bazaar, Mae Sot and Bangkok, Kuala Lumpur, and Yangon, as well as on various Rohingya social media spaces, to inquire into the consequences for the Rohingya identity, the political movements around it, and for various individuals – often in radically different class and spatial positions – who may, under certain circumstances, call themselves Rohingya.

Rehumanizing the Dead of Anthropology: Museums and Societies after Colonialism, with Ciraj Rassool

Human Remains from African  Societies are found in a number of museum collections in Europe and South Africa.  Ciraj Rassool, Professor of History at the University of the Western Cape in South Africa, will address what it means for all these societies to do the work of human remains restitution and reburial, and how this contributes to rethinking the museum after colonialism.  A leading voice in museum and heritage studies, and memory politics and visual history, his publications include, Skeletons in the Cupboard: South African Museums and the Trade in Human Remains, 1907-1917 and The Politics of Heritage in Africa: Economies, Histories and Infrastructures.

The Norris and Margery Bendetson EPIIC International Symposium, presented by The Institute of Global Leadership

The international symposium is an annual public forum designed and enacted by EPIIC students. It features international practitioners, academics, public intellectuals, activists and journalists who come to Tufts each year for three days of discussion and debate in panels and small-group discussions determined by students in the EPIIC course. Students who conduct research projects also have the opportunity to present alongside the invited experts. 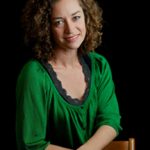 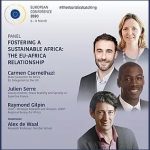 The Conference will take place at both the Harvard Kennedy School of Government (6 & 7 March) and Harvard Graduate School of Design (8 March).

The European Conference is an annual conference on European and Transatlantic Affairs convened by students from the Harvard Kennedy School of Government, Harvard Business School, MIT Sloan School of Management and the Fletcher School of Law and Diplomacy at Tufts University. 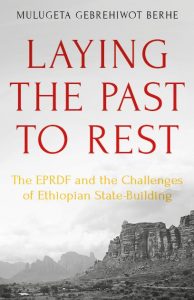 Laying the past to rest: Challenges of the TPLF/EPRDF state building project

The Tigray People’s Liberation Front (TPLF), founded as a small guerrilla movement in 1974, became the leading party in the Ethiopian People’s Revolutionary Democratic Front (EPRDF). After decades of civil war, the EPRDF defeated the government in 1991, and has been the dominant party in Ethiopia ever since. Its political agenda of federalism, revolutionary democracy and a developmental state has been unique and controversial.

Drawing on his own experience as a senior member of the TPLF/EPRDF leadership, and his unparalleled access to internal documentation, Mulugeta Gebrehiwot Berhe identifies the organisational, political and sociocultural factors that contributed to victory in the revolutionary war, particularly the Front’s capacity for intellectual leadership. Charting its challenges and limitations, he analyses how the EPRDF managed the complex transition from a liberation movement into an established government. Finally, he evaluates the fate of the organisation’s revolutionary goals over its subsequent quarter-century in power, assessing the strengths and weaknesses the party has bequeathed to the country.

Laying the Past to Rest is a comprehensive and balanced analysis of the genesis, successes and failings of the EPRDF’s state-building project in contemporary Ethiopia, from a uniquely authoritative observer. 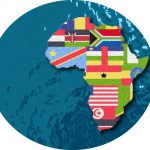 The panel will examine new data that show that most conflict in Africa is internationalized and not solely internal. This establishes a new paradigm that places the inter-state and transnational elements of African conflict firmly at the center of explanations. The paradigm shift has far-reaching implications for how we study African conflicts, and the kinds of interventions necessary to reduce them.

OxFID 2020: Beyond Pledges in partnership with UNDP & NYT
Hosted by Oxford Forum for International Development

Executive Director Alex de Waal will be speaking on the panel, “Global Responses to Genocide”.

The need to protect people from acts of genocide, war crimes, crimes against humanity and ethnic cleansing is a global responsibility. This panel will look at what can be done before such atrocities are carried out so that states can focus on prevention rather than response, examining international inactivity, proactivity and reactivity in response to atrocities. Where the principle of ‘responsibility to protect’ confers no legal obligation, it has succeeded in creating an emerging norm that acknowledges a political commitment to a collective approach to preventing atrocities.

The effectiveness of the ‘responsibility to protect’ principle risks being undermined by apathy and the controversy of its perception as effectively enabling state intervention ‘by the back door’. Could an alternative approach, focused on and wider stakeholder engagement, garner international support and re-energize a failing norm? How can world powers be proactive, rather than reactive, in the fight against ethnic cleansing? How can we balance a proactive approach alongside state autonomy?

Starvation as a Crime in Armed Conflict

Starvation is a time-tested method of war and genocide throughout history. The current scale of suffering and death as a result of the use of starvation is unprecedented in modern history, with a number of present conflicts embroiled in acute food insecurity that has threatened famine. Yet recognition of the deliberate nature of famine, attribution of fault and accountability has remained, until recently, elusive.

Keynote speech by Prof. Alex De Waal,  Famine: How it can still be Eliminated through Political Action

Mrs. Catriona Murdoch, Starvation and the Pursuit of Accountability

Why Judgments Are Not History: the limitations of courtroom contributions to the historical record in Africa

A central claim of international criminal prosecutions is that they contribute to fact-finding and establishing a historical record. But do they? In this presentation Dr. Thijs Bouwknegt addresses the process of legal-historical truth finding, the use of witness testimonies as historical sources, and the legacies of international trials in the wake of the civil war in Sierra Leone (1991-2002), the genocide in Rwanda (1994), and contested leadership change in Côte d’Ivoire (2010 -2011). He raises important questions about the discrepancies between prosecutorial and historical endeavors.

Thijs Bouwknegt is a researcher and lecturer at the Netherlands Institute for Holocaust and Genocide Studies (NIOD). He specialises in transitional justice, international criminal justice, mass violence in Africa and comparative genocide studies. 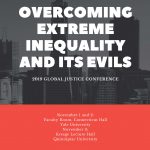 Overcoming Extreme Inequality and its Evils 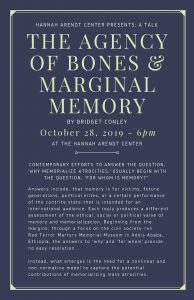 Agency of Bones Marginal Memory
a talk with Bridget Conley 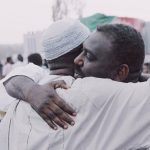 Prospects for Democracy in Sudan

The panel will discuss the dynamics of the 2019 Sudanese revolution, characterised by both non-violent civic mobilisation and the fast-evolving transnational and mercenarised political marketplace. 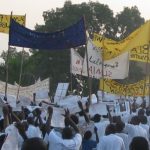 The panel will discuss the efforts of civil society actors campaigning for systematic change despite being a part of a system that profits from their oppression. 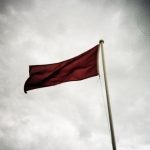 Why is corruption so prevalent in the international arms trade? And what are the key warning signs or “Red Flags” that an arms deal might be corrupt? Dr. Samuel Perlo-Freeman, Program Director of the World Peace Foundation program on Global Arms Business and Corruption presents his latest report for World Peace Foundation, “Red flags and Red Diamonds – the warning signs and political drivers of arms trade corruption”, which discusses some of the key red flags relating to the buyer, the seller, and the details of the deal itself; but also challenges the discourse of corruption “risk” or “vulnerability”, which often seems to present corruption as a pitfall into which companies and governments may accidentally stumble. On the contrary, it is often an active choice by both arms companies and recipient governments, and in “Red Flags and Red Diamonds”, Perlo-Freeman analyses the political and economic drivers that make this a choice they are all too often willing to make. 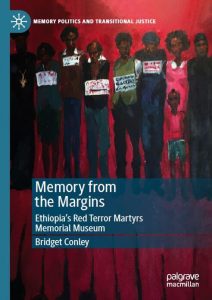 This book asks the question: what is the role of memory during a political transition? Drawing on Ethiopian history, transitional justice, and scholarly fields concerned with memory, museums and trauma, the author reveals a complex picture of global, transnational, national and local forces as they converge in the story of the creation and continued life of one modest museum in the Ethiopian capital, Addis Ababa—the Red Terror Martyrs Memorial Museum. It is a study from multiple margins: neither the case of Ethiopia nor memorialization is central to transitional justice discourse, and within Ethiopia, the history of the Red Terror is sidelined in contemporary politics. From these nested margins, traumatic memory emerges as an ambiguous social and political force. The contributions, meaning and limitations of memory emerge at the point of discrete interactions between memory advocates, survivor-docents and visitors. Memory from the margins is revealed as powerful for how it disrupts, not builds, new forms of community.

14th Conference of the International Association of Genocide Scholars