Maglev trains use magnetism to levitate above the tracks on which they travel. They are faster, more efficient, and more environmentally friendly than modern wheeled trains. It may be that one day soon, maglev technology will be commonplace throughout the world. This article reviews the history of these trains, how they work, as well as their benefits and drawbacks. It also discusses the importance of electrical engineering in developing maglev, and how electrical engineers can make this technology the next transportation revolution.

Imagine a train without wheels. Instead of rolling along the track, it quietly floats above and glides smoothly from origin to destination without ever touching a rail. This may sound like science fiction, but instances of this technology already exist in a number of places in the world. They are known as maglev trains (derived from the term magnetic levitation). These futuristic locomotives offer many new and exciting possibilities for travel. They have the potential for being faster, safer, and more energy efficient than conventional transportation systems. Although such trains are few and far between as of now, they are a hotbed of research in the electrical engineering community. As a result, maglev may be commonplace sooner than you’d think.

The fundamental ideas behind maglev technology can be traced back to the early 20th century. Much work went into laying the groundwork for these trains, including the development of electric motors and research in magnetism. A few scientists, namely Robert Goddard and Emile Bachelet, even dared to propose a vehicle that would float using magnets (Yadav, 2013).  In 1934, a German man by the name of Hermann Kemper was given a patent for the first concept of a magnetic, levitating train (Yadav, 2013). It wasn’t until the 1960s that the idea really began to manifest. At this time, Germany and Japan began researching the potential of maglev. During the 70s and 80s, both countries made great progress in developing these trains. Germany built and tested a string of prototype maglev systems and called their design the TransRapid (Figure 1). The trains achieved speeds of over 250 mph (402 kph) on the test track (Luu, 2005). Japan also tested two series of their own designs, called the ML-500 and later the MLU. Their trains were able to exceed 300 mph (483 kph) (Luu, 2005). 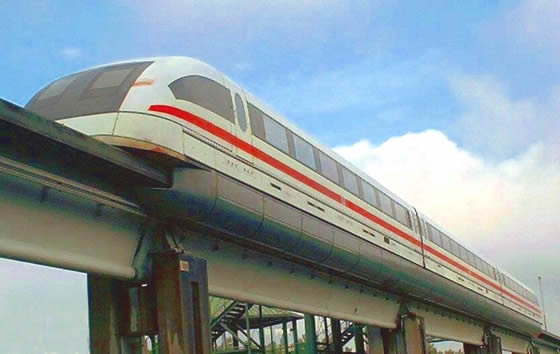 Japan continued development of its maglev technology into the 90s and beyond. They tested a new series, called the MLX, which broke 350 mph (563 kph) in 2003 (Yadav, 2013). No commercial lines have been established in the country, but they are still carrying out research. In Germany, a commercial TransRapid line connecting Berlin and Hamburg was proposed in 1992. However, in 2000, the government shut down the project (Luu, 2005). Not all was lost, though, as the Chinese took notice and commissioned the Germans to build a TransRapid train in Shanghai. The Shanghai Maglev (Figure 2), which resulted from this venture, is now the only high-speed maglev train in commercial use. It carries passengers a distance of 19 miles (30km) in 8 minutes, reaching a top speed of over 250 mph (431 kph) (Coates, 2004). Thus China has quickly become a large player in the worldwide maglev market. The country plans to continue development of its maglev infrastructure. 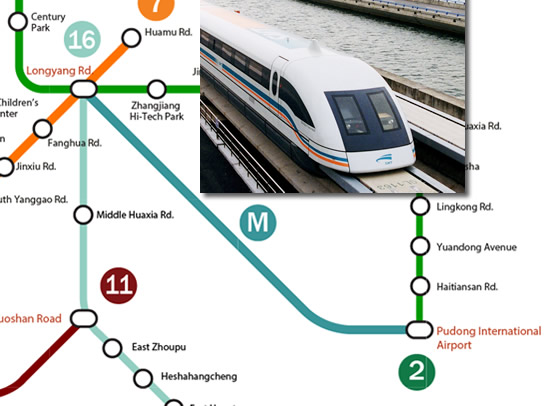 How Does it Work?

Maglev trains do not have wheels or rails. As shown in Figure 3, they have guideways, and they float down these guideways without ever touching them.

Comparison of Wheel-Rail versus Guideways. Source: Author, derived from Lee (2006).

There are three essential parts to achieving maglev functionality: levitation, propulsion and guidance (as seen below).

Levitation is the ability for the train to stay suspended above the track. There are two important types of levitation technology: 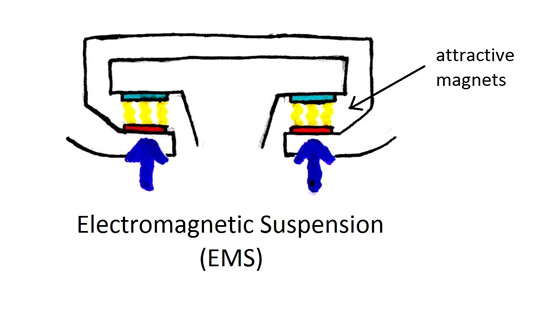 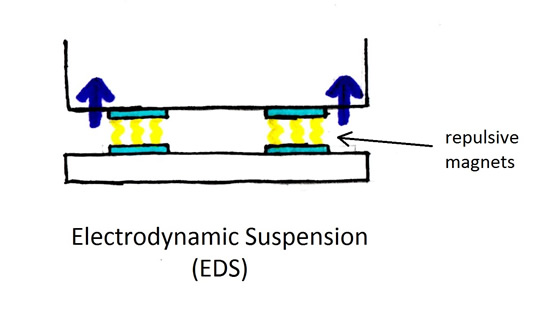 Propulsion is the force that drives the train forward. Maglev uses an electric linear motor to achieve propulsion. A normal electric rotary motor uses magnetism to create torque and spin an axle. It has a stationary piece, the stator, which surrounds a rotating piece, the rotor. The stator is used to generate a rotating magnetic field. This field induces a rotational force on the rotor, which causes it to spin. A linear motor is simply an unrolled version of this (see Figure 7). The stator is laid flat and the rotor rests above it. Instead of a rotating magnetic field, the stator generates a field that travels down its length. Similarly, instead of a rotating force, the rotor experiences a linear force that pulls it down the stator. Thus, an electric linear motor directly produces motion in a straight line. However, this motor can only produce a force while the rotor is above the stator. Once the rotor has reached the end, it stops moving.

When describing a linear motor, the standard is to use the term “primary” instead of “stator,” and “secondary” instead of “rotor.” In maglev trains, the secondary is attached to the bottom of the train cars, and the primary is in the guideway. So a magnetic field is sent down the guideway and it pulls the train along after it. In a way then, the entire length of a maglev track can be considered to be part of the train’s motor. The system that has been described so far is a Linear Induction Motor (LIM). It is so called because the magnetic field in the primary induces a magnetic field in the secondary. It is the interaction between the original field and the induced field that causes the secondary to be pulled along. However, in this configuration, the secondary always lags somewhat behind the moving field in the primary. This lag is a source of energy and speed loss. In a Linear Synchronous Motor (LSM), the lag is removed by attaching permanent magnets to the secondary. Because the secondary is now producing its own stationary magnetic field, it travels down the primary in sync with the moving field—hence the name for this variant of motor (Gieras, 2011). Because LSMs are faster and more efficient, they are the motor of choice in high-speed maglev trains (Lee, 2006).

Guidance is what keeps the train centered over the guideway. For high-speed maglev, repulsive magnetic forces are used to achieve this (Figure 8). In the TransRapid, there are two electromagnetic rails placed on the train facing either side of the guideway. These rails keep the train from moving too far off course (Lee, 2006). In the MLX, guidance is coupled with the levitation system. The levitation rails on either side of the train are connected to each other. Through this connection, when the train moves closer to one side a restoring force is induced which pushes it back towards the center. Thus the MLX is both levitated and guided at the same time (Lee, 2006).

Guidance system of Transrapid and MLX. Both use repulsive magnets. Source: Author, derived from Lee (2006).

The most obvious attraction of maglev trains is that they can travel faster than traditional rail trains. The only commercial high-speed maglev, the Shanghai Maglev, is now the fastest train in existence. It travels over 50 mph (80 kph) faster than the fastest high-speed wheel-rail (320-kph Hayabusa, 2013). And it is only the first. The lack of friction between the train and the guideway removes many limits that bound traditional trains. Maglev will only get faster from here (Luu, 2005). There are other, more subtle qualities that also make maglev attractive:

Although there are many upsides, there are still reasons why maglev trains are not being built everywhere. Perhaps the biggest reason is that maglev guideways are not compatible with existing rail infrastructure. Any organization attempting to implement a maglev system must start from scratch and build a completely new set of tracks. This involves a very high initial investment (Coates, 2004). Even though guideways cost less than rails over time (Powell, 2003), it is hard to justify spending so much upfront. Another problem is that maglev trains travel fast, but they might not travel quite fast enough. Countries with high-speed rails already in place don’t want to spend billions of dollars implementing a system that is only marginally better than the existing solution. The market for these trains just isn’t very large at the moment. It is hard to dispute that these trains are superior to standard ones. Regardless, more work needs to be done before it is worth implementing them worldwide.

The Future of Maglev

Maglev technology holds great promise for the future. It has the potential to be a cheaper, faster, safer, and greener form of transportation than we have today. And with the help of some electrical engineers, it will become all of these things. There are possible applications for this technology in anything from intercity public transportation to cross-country trips. There are even proposals to build long underground tubes, suck the air out of the tubes, and place maglev trains inside of them. In this setting there would be virtually no wind resistance, so a train could easily reach speeds exceeding the speed of sound (Thornton, 2007). While it may be a long time before this technology becomes prevalent, it is difficult to deny that it will at some point be prevalent. The advantages are too hard to ignore. As of now there is only one commercial maglev train in use, and it has already eclipsed everything that has come before it. How will this technology evolve and improve as we move into the future? Only time will tell. But it is highly plausible that we now stand at the precipice of a transportation revolution. I, for one, look forward to gliding across the countryside at 300 mph in a levitating box of magnets.