Computer Assisted Musical Performance (CAMP) is a project developed jointly for the Tufts University Department of Engineering and the New York-based design firm Local Projects. It was designed with one main goal in mind: to make playing music more accessible to people with no formal music background. We aimed to achieve this by creating a wireless network of simple and intuitive MIDI instruments (guitar/bass and drums), disguised as ordinary household objects, that a group of users could play simultaneously. The instruments interacted over a network utilizing Open Sound Control (OSC). As an example, the guitar was inspired from a broom. By linking an unexpected musical output to a familiar, mundane object like a broom, we hope users will walk away with a synesthetic experience that is both memorable and fun. As a result of playing these instruments, we also want users to get exposed to some aspects of playing music at a rudimentary level, including note selection, chord progressions, and tempo management. It is important to note that rather than attempting to mimic, say, a real guitar, these instruments are designed to give users basic control over their musical output. 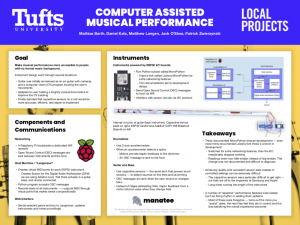