Why Walk When You Can Fly?

This project focuses on modifying a drone by adding features that allow it to deliver packages. The problem we are facing is that many students get locked out of there dorm by leaving their key or student IDs inside their room. The usual is for students to wait for Residential Assistant (RA) to arrive and open the door. This drone will save time and burden for students and RAs. Our initial goal was to deliver small amazon packages across campus to save the time students take to walk all the way to Mail Services, but due to the drone’s battery life and payload weight capacity the team had to rescope the goal and switch from mailing packages to delivering keys and IDs. Over the course of this project, the team worked on 2 drones: the Tello Edu and the AR Parrot 2.0.

The Tello Edu came with a built in SDK. This drone was used to understand how drones work and any problems they faced during flight. The Tello was able to be programmed to be autonomous but lacked any robust feedback features. This drone satisfied our minimal viable product. However, to carry heavier packages and have better autonomous capabilities, the AR Parrot 2.0 was used. The Parrot went under physical modifications. 3D printed leg extensions were attached to give room to secure a payload underneath. Also, the original plastic propellers were replaced with copper fiber propellers to improve the drone’s stability. An attached 3D printed container was designed to store the package and release it once the drone lands. ROS packages were used to add automatization and navigation capabilities to the drone.

The ROS-Indigo distribution of ROS being used is what we are running our PTAM/SLAM algorithms on. This operating system environment provides the working ecosystem where the ardrone_autonomy node and the tum_ardrone node communicate with each other and also share data between each other. A third node (mustard_drone) was created to house the algorithms, navigation metrics and pre-defined flight plans that are needed. Parallel Tracking and Mapping (PTAM) focuses on helping the drone localize where it is in space as well as figure out where it should be relative to the commands it has been given (hover, pitch/roll/yaw, etc.). Simultaneous localization and Mapping (SLAM) is a node of functions dependent on PTAM, but also helps the drone conduct itself along a predefined flight plan in order to estimate where the drone should be in near real-time. 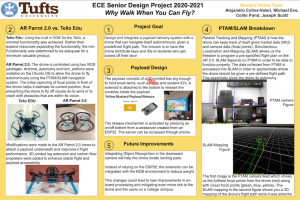