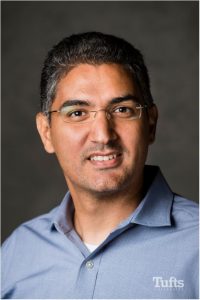 Khaled ElMahgoub received B.Sc. and M.Sc. degrees in electronics and electrical communications engineering from Cairo University, Egypt, in 2001 and 2006, respectively. He received his Ph.D. in electrical engineering from the University of Mississippi, USA, 2010, and M.Sc. in Computer Science from Georgia Institute of Technology, USA, 2020. From 2001–2006, he was a teaching and research assistant at Cairo University. From 2007–2010, he was a teaching and research assistant at the University of Mississippi. From 2015, he is an adjunct professor at Nile University, Egypt. Currently, he is an Adjunct professor with Electrical and Computer Engineering Department at Tufts University, he is the head of  software quality at Philips. Previously he was a senior manager of Radar Verification and Validation at Autoliv. ElMahgoub was working as Validation Engineering Manager at Trimble Navigation, testing and developing RFID and IoT systems and applications. Moreover, he was a research affiliate with the Auto-ID Labs at the MIT. Throughout his academic years, he coauthored over 45 technical journals and conference papers. He is the main co-author of two book entitled “Enhancements to Low Density Parity Check Codes: Application to the WiMAX System”, 2010 and “Scattering Analysis of Periodic Structures Using Finite-Difference Time-Domain Method”, 2012. ElMahgoub is assistant editor for Applied Computational Electromagnetic Society (ACES) Journal. He is also a frequent reviewer for many scientific journals, conferences, books, and has chaired technical sessions in international conferences. He is a senior member of IEEE, member of ACES and Phi Kappa Phi honor society.  ElMahgoub is listed in Who’s Who in Science and Engineering. He is the recipient of ACES Early Career Award 2014, University of Mississippi scholarship for Ph.D. Degree, University of Mississippi graduate school summer assistantship and Mobinil Scholarship for Master’s Degree.  His current research interests include SW Engineering, Embedded systems, RFID systems, Sensors, IoT, channel coding, FDTD, antenna design, and numerical techniques for electromagnetics.