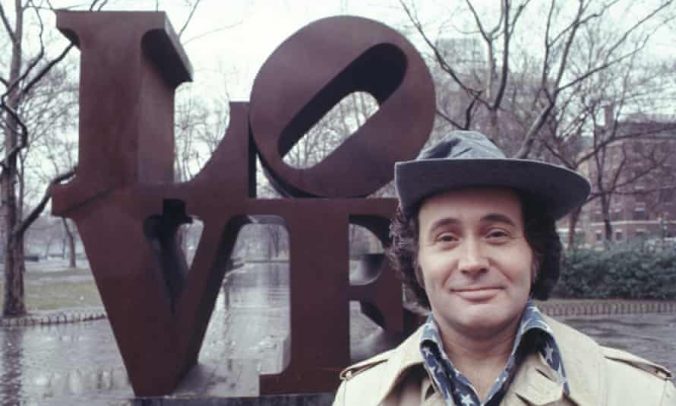 Since Valentine’s Day was this past weekend, I thought that a fitting topic for this week would be LOVE. LOVE is a collection of sculptures created by Robert Indiana (born Robert Clark), an artist from New Castle Indiana. The sculpture is of the letters “L,” “O,” “V,” and “E,” all capitalized in an old-fashioned, serif-type font, and are stacked together in a block with a crooked “o.” Indiana created many versions of LOVE for different cities around the world, writing “love” in their respective languages, each with its own tilted letter. The original sculpture that was produced in 1970 is currently housed in the Indianapolis Museum of Art. Though the sculpture itself has become well-known by many, Indiana’s recognition is less renowned, leaving a bitter-sweet history between the artist and his work.

What does LOVE have to do with museums or museum studies? Well, according to Julia Terruso in her article, “City Still seeking permission for LOVE sculpture design,” hundreds of people showed up to LOVE park (officially named John F. Kennedy plaza) in Philadelphia in 2017, expecting to receive granite blocks painted with a rendering of LOVE that they had purchased from the city for $50.00. Unfortunately, the citizens of Philadelphia left empty handed due to a cease-and-desist letter to the city by Indiana’s representatives. As it turns out, the city did not obtain the proper copyright or trademark agreements before selling such reproductions of LOVE.

How could this have happened? Hasn’t the sculpture been reproduced numerous times before and on everything from t-shirts to coffee mugs? Yes, it has, but that doesn’t necessarily mean that the individuals/organizations selling those products had the proper copyrights to the image.

To help individuals better understand the restrictions related to the LOVE case, Griesing Law published an article, “Let’s Talk About LOVE.” The article explains that under current copyright laws copyright of a work belongs to the artist/creator immediately after it is fixed (i.e. drawn, painted, or sculpted) in a tangible form of expression. In order for the artist to have additional protections the artist must register their work which would allow them to “seek statutory damages for copyright infringement.” Any copyright protections obtained by the artist last for as long as the artist is alive plus seventy years after death. Additionally, an artist can sell rights or grant permissions for use of their work. “These exclusive rights include the right to reproduce the work; the right to prepare derivative works based on the original work; the right to distribute copies of the work; and the right to display the work publicly.” However, just because a work is displayed publicly, does not mean that it is free to be used without the artist’s permission. When images are used in a commercial fashion, there is greater incentive for the artist to seek legal action. “In the case of the Philadelphia LOVE Sculpture blocks, it seems that express permission for this project was not sought because it was assumed that general permission from the artist had already been obtained. Provided the work is still subject to copyright protection written permission from the artist should have been confirmed, and if not on file, obtained before creating and selling the commemorative blocks.”

This, however, was not the end to the copyright battles around LOVE. In 2018, soon after Indiana’s death, the Morgan Art Foundation filed a suit again Jamie Thomas, the artist’s caretaker, and Michael McKenzie, the founder of American Image Art (a New York publishing company), stating that Thomas and McKenzie sold works that were falsely attributed to Indiana. In return, according to Justin Kamp in his article, “Robert Indiana’s ‘LOVE’ is at the center of a $150-million legal battle,” McKenzie claimed that the Morgan Art Foundation has committed the greater fraud “by copyrighting Indiana’s LOVE design, which […] has been in the public domain since 1964.”  The version of LOVE that McKenzie is referring to is the original design that was created by Indiana in 1964 for a Christmas card produced by the Museum of Modern Art in New York City.  According to the previous version of the Copyright Act, artists did not have automatic copyright to their work. Indiana, not knowing about copyright law at the time, did not seek copyright protections until he produced the sculptures. Therefore, there was a period of time in which LOVE was in the public domain.

Understanding copyright laws can be complicated – and we haven’t even touched on Trademarks. However, if any lesson is to be learned from this story of LOVE, it is that if museums and institutions that wish to use the works in their collections for more than display, it is better to confirm what rights you have than to settle lawsuits later. Additionally, artists should educate themselves on the current copyright laws so that they can be sure they have the proper protections in place for their works.

Want to learn more about the history of LOVE? Check out these links: