June 21, 2021 / Lucy R. Wickstrom / 0 Comments
Over the weekend, many people across the nation celebrated Juneteenth — a day made all the more special this year because it was finally made a national holiday, the first new one declared since Martin Luther King, Jr. Day in 1983. This long overdue step in our country’s story is vital, yet it is also just the beginning: a reminder of all we have yet to accomplish in bringing freedom, justice, and equality to all. As beacons of history, social enlightenment and education, and change, museums are uniquely situated to tell the story of Juneteenth and its implications, and many have long been doing so. 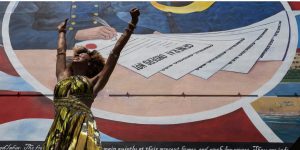 First, what is Juneteenth? This holiday, long celebrated by Black Americans, commemorates June 19th, 1865. On this day, the arrival of Union troops to Galveston, Texas informed the still-enslaved African Americans that they were free; the Emancipation Proclamation, signed all the way back in 1863, was at last the law of the land. Peace had come nearly two months prior, resulting in the South’s defeat; the treaty was signed, President Abraham Lincoln already dead. Yet news spread slowly, and enslavers resisted the change, meaning that these Texan African Americans still did not know they were free; Juneteenth remembers the day that the belated news finally reached them. Celebrations of this holiday spread rapidly through Black communities in the following years, and now, it has finally been acknowledged on a federal level.
So what can we expect from the museum field going forward, with Juneteenth finally being a part of the national consciousness? Here is just a brief list of examples of what we saw this year, and what we can expect from now on.
The Harriet Tubman Museum, Cape May, NJ 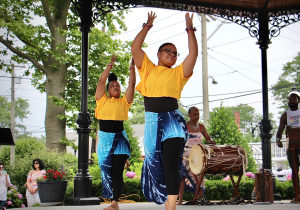 Members of the Pan African Rhythm Cooperative perform at the grand opening of the Harriet Tubman Museum, which doubled as a Juneteenth celebration.

This museum had its long-anticipated grand opening on June 19th, 2021, combining the ceremony with a Juneteenth celebration. The commemoration included performances by the Pan African Rhythm Cooperative, Civil War reenactments, communal prayer, and a discussion of the meaning of Juneteenth. Four hundred community members gathered to attend.
National Museum of African American History and Culture (The Smithsonian), Washington D.C.
NMAAHC honored Juneteenth with a whole series of virtual programs, which included insights from novelists, professors, eminent scholars, singer-songwriters, storytellers, and museum professionals. These online events, free and open to the public, grappled with the meaning of Juneteenth historically and in our modern climate, while also educating participants about African American cultural traditions, literature, activism, and even food. Watch those programs and learn more about the holiday on NMAAHC’s Juneteenth resource page here.
The Museum of Fine Arts, Boston, MA
Over the weekend, the MFA commemorated Juneteenth with free admission to the museum and a series of outdoor events, including a concert organized by BAMS Fest (an organization dedicated to breaking down racial barriers in the arts), art-making inspired by and discussions in tribute to Basquiat, and a screening of the new documentary Summer of Soul, presented in partnership with the Roxbury International Film Festival. The MFA’s events illustrate the ability of museums of all types to fight for racial justice and celebrate the contributions of people of color in our nation. 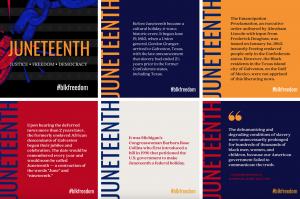 Informational slides on Juneteenth. via blkfreedom.org