Slippage—how will the dead matter in Ethiopia? The Mango Orchards of Zamra, Tigray 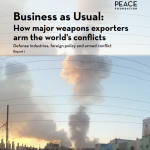 Report by Sam Perlo-Freeman (Campaign Against the Arms Trade) published on March 3, 2021.

For more information about the Report and the broader research program, visit our website.

The harmful impact of arms transfers on conflict has been well-documented by campaigners, humanitarian NGOs, and the United Nations. Further, researchers have found evidence that arms transfers to a state increase the likelihood of conflict breaking out; and, once begun, render conflicts longer and more deadly.

Recognizing these detrimental impacts, in recent decades, policymakers committed to a range of measures designed to control arms exports. These controls were especially focused on limiting sales when conflicts involve patterns of human rights abuses and violations of international humanitarian law.  In subsequent years, there have been heated debates about whether sales should proceed in a number of particular instances, but there is no comprehensive assessment of the overall impact of policies designed to limit arms sales to countries involved in conflicts.

This research provides the first global analysis of how conflict in, or involving, a recipient state, impacts exporters’ willingness to supply arms. It analyses the top eleven global arms suppliers over the ten-year period 2009-18. Listed in order by the volume of major conventional weapons transfers, these global sales leaders are: The United States, Russia, Germany, France, China, The United Kingdom, Spain, Israel, Italy, The Netherlands, and Ukraine. These countries assert widely varying formal policies regarding arms exports, but the empirical record is, for the most part, remarkably similar.

There are some differences among the eleven top arms exporters covered in this report: Russia supplied arms to the greatest number of wars; and Ukraine, the smallest of the exporters, was a significant conflict supplier in relation to its overall level of exports. Even so, the difference between these countries and the US and western European suppliers, was relatively minor.

There are no clear cases where the outbreak of war was accompanied by a halt in arms sales by a major exporter. In cases where exporters did not supply arms to war, the recipient(s) tended to be smaller, poorer countries where demand for arms is lower (‘low stakes’ cases), even in wartime. Clearly, political factors also prevail in some cases, for example where the supplier and recipient had a hostile relationship, or where the recipient had been regarded by (western) suppliers as a ‘pariah’ long before the outbreak of war (e.g. Iran and Syria).

For some exporters (Russia, France, Israel, Spain, and the Netherlands), conflict appears to be associated with a higher probability of transfers. For the other seven, it made no significant difference either way.

US and European exporters sometimes displayed a pattern of selective, ‘low stakes’ restraint, including cases where they imposed arms embargoes in direct response to conflict or repression. These tended to be cases where opportunities for sales were in any case limited.

An established arms supply relationship was one of the most powerful determinants of whether arms transfers would occur in the future between a supplier and recipient, regardless of the recipient’s conflict status at any particular moment in time.

This report is part of the WPF research program, Defense industries, Foreign Policies and Armed Conflict, funded in part by the Carnegie Corporation of New York and carried out in partnership with the Center for Responsive Politics. It asks: why, despite robust regulation mechanisms in key exporting countries and international monitoring efforts, has the global arms trade proven remarkably resistant to effective controls – with direct enabling consequences on conflict situations?