The Runstadler Lab seeks to understand genetic factors that impact susceptibility to infectious disease, specific or general and the repercussions for potential epidemics, persistence, and evolution of those infectious agents. Our research is conducted within the context of the interactions that define the ecology between an infectious agent, the environment and the host. Our focus is on the host/agent interaction and we are exploring a variety of approaches that may shed light on these interactions.

In doing so, our new research initiatives seek to break down traditional academic boundaries and bring together collaborative teams to address issues including the identification of disease vectors, the role of environmental change and pathogen persistence, population genetics and evolutionary biology, and the ecology of infectious agents.

Wild birds and influenza: a system in flux 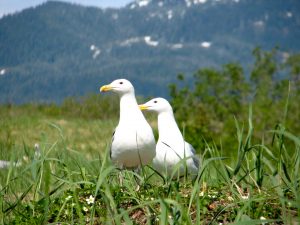 How do wild birds contribute to hemispheric mixing and spillover?

Does human activity create hotspots for emergence and spillover with wild birds?

Human activity is impacting both regional and global ecology on a scale previously unseen. As human populations have grown and the boundaries between human and wild spaces are impacted, both by resource exploitation and physical interaction, ecological processes are likely to be effected, including disease transmission and evolution. Infectious disease dynamics are clearly impacted by human activity and influenza is a good example. Cross species transmission and incursion into human populations threatens emerging epidemics. We are investigating the impacts of human activity on influenza ecology and evolution by studying the impact of fisheries activity on viral distribution and prevalence in both gulls and shorebird species in Alaska. This work will lead to new understanding and model parameters that help us determine what factors are important in the evolution of new, potentially pandemic strains of virus and to understand how we may intervene to delete such viruses in their infancy.

Shorebirds: a boom and bust host for flu 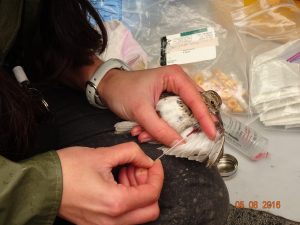 Does virus peak at any time and is it consistently present in the Pacific Coast populations?

One of the best described and most famous locations for investigating avian influenza is Delaware Bay, New Jersey. A detailed relationship between Horseshoe crab spawning and shorebird migration appears to amplify virus transmission in a unique manner important to the persistence and prevalence of virus. Outside of Delaware Bay, investigations are sparse but suggest the Delaware Bay ecology is unique. Over 5 years (since 2016) we have studied shorebirds in another major aquatic ecosystem, the Copper River Delta, Alaska to provide a long-term comparison with Delaware Bay. Our findings, indicate that shorebirds are ‘boom and bust’ hosts  with no temporal or seasonal pattern in infection. Some years low prevalence is observed, while other years outbreaks are detected (ie. LPAI H5N2 in 2019). This highlights differences in influenza ecology in shorebirds along the Pacific vs Atlantic coast and suggests overlap with other avian reservoirs may be an important predictor of infection. 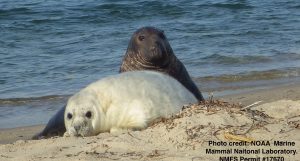 What virus are grey seals responding to and shedding? Do they represent different pools?

Over the past 30-40 years, numerous instances have been documented of influenza disease outbreak in pinnipeds, primarily harbor seals, and primarily in the Northwest Atlantic Ocean ecosystem. Recent studies by our group have demonstrated the presence and likely endemic circulation of influenza viral strains in Atlantic Grey Seals who are exposed to virus with apparently few clinical signs. Studies of other RNA virus indicates that Harbor Seals may be more sensitive to emerging infection than cohabitating Grey seals. Our investigations are seeking to understand the ecology of influenza in pinniped species and to explore the importance of differences in immune response between Harbor and Grey seal species.

The CoVERS study seeks to understand if and how animals are affected by SARS-CoV-2/COVID-19.

What species are susceptible?

Does the virus have to change in order to spill into new species? Are our wild populations at risk?

CoVERS is an umbrella study that has numerous complementary projects. These include our home “swab and send” kits to screen pets and owners for active or past COVID-19 infection, opportunistic sampling at Tufts-run and partner veterinary and shelter facilities in New England, a cohort study at a local zoo and wildlife surveillance at the rehab interface. 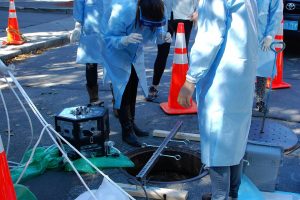 Is influenza detectable in public sewage? If so, can we detect rising prevalence before other data types?

Are other viral pathogens detectable?

What is the best method to detect virus? Can we improve on the method?

Human data on publicly significant viral infection is garnered primarily from hospital admissions and visits that are inconsistently reported and may take weeks to filter through to epidemiological investigations. Surveillance for Influenza and other disease agents, undertaken in a more timely, consistent, and comprehensive manner could have major impact on public health response. We are investigating the logistical and technical challenges of using waste streams as a reliable and informative source of information on pathogen epidemiology. 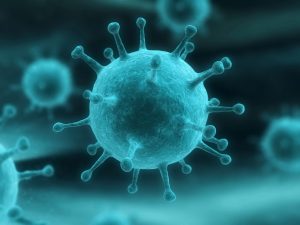 What are the drivers of adaptation or reassortment?

What is the host range of different subtypes?

Movement of influenza virus between species has proven crucial to emergence of dangerous viral strains in humans. Our lab has contributed to key findings that show mutational and reticulate processes are an important precursor to host jumping. Our studies have shown that reassortment is favoured over mutation when the virus makes large taxonomic leaps.

We are further exploring the constraints and possibilities of virus evolution in host species, particularly mammalian hosts to understand more fully the ability of different viral strains and wild hosts to play critical roles in emerging disease in humans, at both the molecular and ecological scales. 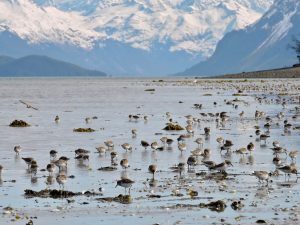 How does microbial community and environmental factors (physical, chemical) impact persistence of virus?

Does the presence of microbes help or harm the virus at different stages of the viral life cycle?

In avian species in particular, environmental factors play a critical role in the survival and transmission of virus to new hosts. Virus shed into the environment must persist as infective particles to enable transmission into new hosts. Mounting evidence from the field suggests that influenza can persist for longer periods in aquatic habitat (> multiple months) than previously characterized in lab settings.

Despite this, our understanding of environmental persistence does not go far beyond basic physio-chemical parameters. We are investigating the complexities of environmental transmission including factors associated with bacterial communities, likely a strong component for survival both outside and inside the influenza host.

Can we effectively model (by machine learning) influenza phenotype by sequence and limited phenotypic assay?

Is this a model for other virus/pathogen?  Can we make phenotypically predictive changes in viral proteins?

Mutations in the influenza viral genome that have been experimentally tested to enhance viral adaptation to mammalian cells are used to identify naturally occurring strains of increased risk to public health. Our preliminary data suggest that this mutational data alone are, at best, insufficient for concluding that a virus is of high risk. Additionally, viral genetic background is often an untested confounder preventing balanced comparison of viral phenotypes between experiments designed to characterize new viruses of interest. This has resulted in an inability to accurately assess and compare the potential of newfound viruses for human pathogenesis. Combined with the volume of viral genomic sequence diversity being generated by viral surveillance efforts, this problem requires a new, rational, comprehensive approach to achieve the goals of predictive and preventative pathogen surveillance. We have begun development of a new platform to assess viral risk. In this work we are systematically characterizing the functional differences attributable to natural polymorphic diversity of influenza virus polymerase genes. The resulting high quality dataset, covering all known polymorphic diversity in contemporary viruses is then being used to train machine learning models to predict the phenotype of novel virus from their nucleic acid sequence. This project will deliver a high quality dataset for the influenza research community, including a web-based front-end to the predictive model of influenza phenotypes from genotype, which will find downstream use in drug development, influenza surveillance, and other translational applications. We are in the initial steps of a long range plan to expand a platform for influenza risk assessment based on viral genomic sequence alone. Our study will also serve as a template study design for merging data science with experimental techniques to advance broadly applicable pathogen characterization efforts.

Are there features of proteoglycan “receptors” that define binding of flu virus?

Can they be exploited therapeutically?

A focal point of the G/P work is on understanding the critical features of proteoglycan receptors and viral ligands that define host/pathogen interactions. Through a combination of computational and experimental means, we are attempting to define the shared features of influenza virus that impact viral docking to host cells and that distinguish the predilection of viral subtypes for host species.

How does the composition of host membranes impact viral life cycles?

How is this controlled by the host/virus?

Influenza virus enters and exits a host cell via interactions with cell membrane components, both viral and host derived. Experimental evidence suggests that, like many cellular pathogens, the assembly and budding of viral progeny is not random with respect to the known organizational characteristics of host cell membranes. For instance, viral assembly is likely occurring at regions of lipid rafts in the host cell. We are working to understand the differences in host cell membrane components between influenza hosts and how those differences impact and might be exploited to alter the efficiency of viral replication.

What genetic factors lead to pathogen protection or susceptibility in wildlife?

Viral reservoir and reservoir-like species play an important role in ecology and evolution. However, wild species are hugely understudied and underrepresented in basic research. Using a combination of our own field samples, collaborations and published genomic data, we are developing tools to investigate correlates of influenza disease resistance and/or susceptibility among multiple species. We are leading a comparative genomics project to develop and study high resolution genomes for grey and harbor seals. We are also developing a generalizable pipeline using diverse avian genomes for large-scale comparative genomics projects. These bioinformatic approaches can then be directly followed up in the wet lab with our extensive wildlife and surveillance samples. We seek to provide unbiased host factors associated with viral resistance/susceptibility while contributing valuable tools for all investigators.

Do environmental contaminants or natural products impact immunity/resistance to influenza infection? If so, does this influence the frequency of spillover events?

Several studies have demonstrated, in both animal models and in natural occurrences the bioaccumulation and immune effector impacts of contaminant molecules. Likewise, it is well established that viral (and more generally microbial) infection also can result in both immune stimulation but also immune modulating impacts. With increasing evidence of environmental contamination due to an ever increasing array of natural and man-made compounds, the interaction of contaminants and infectious agents is likely to be impacting disease ecology and evolution in the natural environment. Yet, to date, surprisingly little scientific work is being done to examine these interactions. Our work is building on a small body of prior work to understand how contaminant exposure may impact the susceptibility of animals and humans to influenza infection and what the interaction may mean for disease transmission, persistence and evolution.