In the previous blog posts, Deep Brain Stimulation was introduced, then the history of psychosurgery leading up to the treatment of depression was traced. In this post, we will cover some of the neurological theories as to why it is an effective treatment. We will begin with the prevailing theories behind the treatment of depression with DBS, then move on to explore some more novel ideas.

The most commonly targeted area of the brain in DBS for depression is the Subcallosal Cingulate Gyrus (SCG), which has been known to be heavily involved in mood regulation. Early studies showed that both successful pharmacotherapy and psychotherapy lead to reductions of activity in this area. Lozano et al (2008) furthered these studies by showing decreases in activity in the orbital and medial prefrontal cortices and insula, as well as increases in the parietal lobe, mid and posterior cingulate gyri. Most importantly, their study showed increases of activity in white matter immediately next to the electrodes. The discovery of a wide range of affected locations, as well as the activity in connective tracts, became a key step in establishing the treatment of depression as the treatment of a network.

The idea of neural connectivity has become a favorite in exploring depression. Johansen-Berg et al. (2008) did a tractography analysis to see how different areas of the brain are connected. The subgenual anterior cingulate cortex (sACC) was closely examined as it was predicted be a hub of the depression network. They determined that DBS targeting the subgenual portion is effective in part because it affects the OFC, hypothalamus and amygdala. These results in part replicated Lozano’s work and solidly established the detailed study of networks in depression. The role of the sACC as a neural hub is also supported by Sjoberg and Blomstedt (2011) who use it in an attempt to wed two older ideas on depression, the Catecholamine Hypothesis and the Vicious Cycle Theory, by finding a single nucleus of common ground. 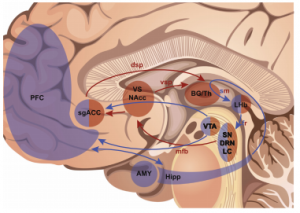 This image shows the dual-loop system. Regions in brown are the fast inner loop, and blue regions are part of the slower outer loop. (Hoyer et al., 2013)

Despite the success of pinpointing neural locations, the problem of explaining both the acute and delayed effects of DBS was still a loose end. Hoyer et al. (2013) addressed this question by dividing the known neural circuitry in two. The first loop is described as the inner, or fast-acting, loop. This includes the thalamus, striatum and sgACC. This loop is predicted to be responsible for the acute effects that can manifest themselves while the surgery is in progress. However, they admit that this discovery is complicated as the surgical procedure can cause microlesions of the site, which may lead to similar effects.. Their outer loop connects cortical areas of the front lobe, the amygdala and hippocampus. They advance the notion that neuroplasticity in these areas contributes to restoring non-depressive behavior.

A new study has delved further into the effects DBS has on neuroplasticity and affect by looking at serotonergic neurons in mice. Veerakumar et al. (2014) experimented with DBS in the ventral medial prefrontal cortex, which has analogous function as the SCG in humans. The mice were defeated socially, they effectively got beaten up by older mice, which is a stressor that introduces depressive-like symptoms. They conclude that mice exposed to this social-defeat paradigm show an increase in length and number of dendrites of serotonergic neurons as well as desensitization. Veerakumar terms this as “maladaptive neuroplasticity.” His research then continued to show that DBS can reverse these effects as well as reintroducing normal social behavior. While this study does serve as a proof of concept, it does not explain yet another loose end; why do symptoms return so rapidly when the DBS electrodes are turned off?

This question among many others still needs to be answered. However, the efficacy of DBS became clear long before neurological theory could explain it. So, many of the studies here are not only working to improve its therapeutic capabilities, but also to figure out why it works. In the final blog post, we will look at the ethics of using what we have seen to be a largely unexplained and experimental treatment.